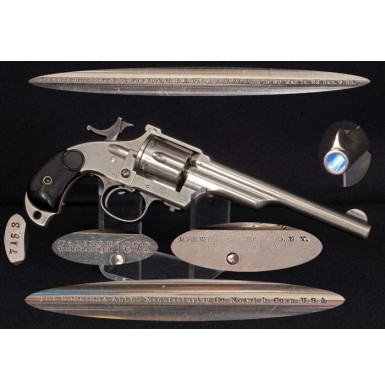 Offered here is an EXCELLENT condition example of a Merwin, Hulbert & Company “Pocket Army” Revolver. The “Pocket Army” was introduced in 1883 and remained in production through the 1880’s. It is not clear exactly how many were produced, due to an erratic serial numbering system and an 1891 fire that destroyed all of Merwin, Hulbert & Company records. It is believed that only a few thousand of the revolvers were produced. This is a 3rd model gun, with a top strap and traditional cylinder flutes, and is made with the double action trigger mechanism. The right side of the frame is marked in two lines below the cylinder: MERWIN, HULBERT & CO. N.Y. / POCKET ARMY. The left side of the frame is crisply marked in two lines, below the cylinder: CALIBER / WINCHESTER followed by a much larger 1873, indicating the revolver is chambered for the .44 Winchester Center Fire cartridge (also known as the .44 WCF or .44-40). The top of the 7” round barrel is marked: MERWIN HULBERT & CO. New York, U.S.A. Pat. Apr. 17, 77. June 15, 80. Mar. 14, 82. Jan 2, 83.. The left side of the barrel is also marked in a single line: THE HOPKINS & ALLEN Manufacturing Co. Norwich, Conn. U.S.A.. All of the markings are very crisp and clear, with only the “Pocket Army” marking being somewhat lightly struck. The serial number 7158 is present on the right side of the exposed “skull cracker” portion of the bird’s head grip. Like the majority of Merwin & Hulbert arms, the gun is assembly numbered on the major parts. In this case the frame under the grips and the rear of the cylinder are numbered 5608. The rear of the barrel web is numbered 5802. A mismatched barrel number is not uncommon on the Pocket Army model, as barrels were frequently changed, and replacement barrels of various lengths (3 ““ , 5 ““ and 7”) were easily purchased. The closeness of the assembly number may indicate an extra barrel ordered not long after the gun was purchased, or possibly a factor error in the numbering. As noted, the condition of the gun is truly excellent and the condition and patina of the barrel and the balance of the gun match perfectly and the two pieces have clearly been together since the period of use. Overall, the revolver retains about 93% of its original nickel finish. There is some very minor flaking and bubbling present on the left side of the barrel and barrel web, just in front of the cylinder. A small amount of nickel has flaked and thinned on the left side of the “skull cracker” grip projection, and there is a small amount of minor flaking on the left side of the barrel at the muzzle. The barrel shows a couple of minor, pinprick flakes as well. There is some minor flaking on the backstrap as well. The cylinder shows the largest amount of loss, which is really quite minimal, with some flaking and loss of nickel in a couple of the cylinder flutes. Most of the areas where the small amounts of nickel have flaked now show a lightly freckled, oxidized patina. The overall condition of the revolver and its finish is clearly indicated by the photos below. As is typical of 19th century nickel finishes, the finish shows some minor frosting from age. The bore of the revolver rates about EXCELLENT and is mostly bright with crisp rifling. The bore shows some scattered frosting and lightly scattered pinpricking along its length in the grooves, and some lightly scattered patches of pitting as well. The hammer retains about 80%+ vivid case hardened colors, with some minor fading and light edge wear noted. The trigger guard retains a similar amount of case coloring, which is most evident on the wider web portions at the front and rear where the guard meets the frame of the revolver. The revolver is mechanically excellent and the double action mechanism works flawlessly in both double and single action modes. The revolver cycles, indexes, times and locks up perfectly. The locking system of the revolver works flawlessly as well, with the forward portion of the frame, barrel and the cylinder unlocking, rotating and sliding smoothly forward as they should. The revolver mechanism still retains strong “suction”, with the action drawing itself closed about halfway after it has been opened and released. The mechanism locks the gun up securely, exactly as it should. All of the screws remain crisp and sharp with practically no slot wear. The innovative sliding loading gate functions smoothly and opens and closes exactly as it should. The two-piece, black hard rubber grips are in equally EXCELLENT condition, with no breaks, cracks, chips or repairs. They still retain crisp checkering and fit the frame perfectly.

Overall this is a really EXCELLENT condition example of the scarce and popular Merwin, Hulbert & Company Double Action Pocket Army Revolver. The revolver is in the most popular and desirable caliber, .44-40 and has a great 7” long 3rd Model round barrel. These large frame, long barrel Merwin & Hulbert revolvers saw use by the good, bad and the ugly during America’s westward expansion and are an important part of old west firearms history. Every serous collection of pistols from the American west needs at least a couple of Merwin & Hulbert revolvers in it, and this one would be a great addition. Over the last few years the prices of Merwin & Hulbert revolvers have steadily increased, as has their desirability and popularity. Very high condition examples of the large frame revolvers are commanding higher and higher prices every day, and often result in strong competitive bidding at auctions. This is a great chance to add a wonderful condition Merwin & Hulbert Pocket Army to your collection for a very reasonable price. Until about 2 decades ago, these revolvers were underappreciated and even today they remain undervalued. With Colt Single Action Army revolvers in this condition regularly bringing high four to low five figure prices at auction, I don’t think it will be long before the much rarer Merwin & Hulbert guns start to give the Colt’s a run for their money in the value department. Don’t miss your chance to own an exceptional quality Merwin now, before the prices double over the next few years.