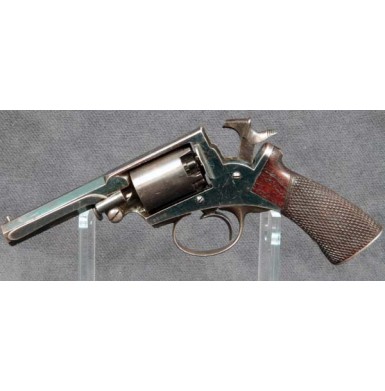 This is a really fantastic condition example of the Massachusetts Arms Company Adams Patent Pocket Revolver. The story of the Adams Patent Revolvers as produced by the Massachusetts Arms Company is a very interesting one. Robert Adam’s “self cocking” or “double action” revolver was originally patented in England in 1851, with the primary patent covering his one piece, solid frame and barrel forging. The frame was considerably stronger than the open top, two-piece, wedge retained frame and barrel system used by Colt. Adams instantly found success selling his guns in England, and in 1854 Lt. F.B.E. Beaumont developed an improvement to the lock work, which allowed the pistol to operate in both conventional single action and double action modes. It was this variation of the Adams revolver (the M-1854 or “Beaumont-Adams”) that was produced under license by the Massachusetts Arms Company of Chicopee Falls, MA. In 1857 Massachusetts Arms entered into an agreement to provide 500 of the “belt” sized (.36 caliber), Beaumont-Adams Patent revolvers to the US Ordnance Department. At the same time, Massachusetts Arms developed and produced a scaled down, .31 caliber “pocket” variant of the belt revolver. This revolver was marketed to the civilian market, as a more robust and safer alternative to the Colt M-1849 “Pocket” revolver. The Adams patent guns were easier to get into action quickly due to their self-cocking, double action lockwork, and also offered a frame mounted sliding safety on the right side of the revolver. Both of these features made the Mass Arms revolver more suited to carry in a trouser or coat pocket. The small overall size, just under 8” for 3 ““ barreled version, was somewhat more compact than the typical 4” Colt Pocket as well. Much like the larger belt revolver, the pocket revolver was 5 shot percussion pistol with the traditional hump-backed Adams style checkered walnut grip. The .31 caliber octagon barrel was 3 ““ in length, although a very small number were produced with 4 ““ barrels. The guns featured loading levers mounted on the left side of the frame, based upon the Kerr patent rammer that was found on most English Adams revolvers produced after the mid-1850’s. Mass Arms produced approximately 4,500 of the pocket revolvers between 1857 and 1861, when they abandoned revolver production to concentrate on producing carbines for the US Ordnance Department.

The the Massachusetts Arms Company Adams Patent Pocket Revolver offered here is in truly EXCELLENT condition. The frame and barrel of the revolver retain about 88%+ of its original bright blued finish, with some light wear and fading to the finish, mostly along sharp edges, the top strap and the portion of the barrel that is scuffed whenever the cylinder arbor pin is removed. The cylinder retains about 90% of its original blued finish, which is more muted than the frame and barrel finish due to the heat generated when the revolver was fired. The areas on the frame, barrel and cylinder that show any finish loss have developed either a smooth plum brown patina, or a medium pewter gray patina. The metal is smooth throughout with no pitting and all edges remain crisp and sharp. The case hardened triggerguard and hammer have “silvered-out” to a medium smoky pewter patina. The bore of the .31 caliber pistol is in VERY GOOD+ to NEAR FINE condition. It is mostly bright and retains crisp rifling, with only some light scattered patches of pitting and minor roughness. All of the original percussion cones (nipples) are present and are in very good condition as well. The gun is clearly marked in three lines on the topstrap:

The pistol functions perfectly and is mechanically excellent. The Kerr’s patent loading lever is prefect on the left side of the revolver and functions smoothly. The lever locks into place securely when it is not in use. The frame mounted safety on the right side of the revolver is present and functions perfectly, sliding easily into the “safe” position which locks the cylinder rotation, or just as easily into the “fire” position, freeing the cylinder to rotate. The lower left side of the frame and the side of the cylinder are both marked with the matching serial number 2700, placing the pistol right in the middle of the Mass Arms production run of pocket revolvers. The checkered one-piece walnut grips are in EXCELLENT condition. The grips retain crisp, sharp checkering throughout and they are free of any breaks, cracks or repairs. The grips show only the most minor handling and wear marks, and they clearly the match the condition of the rest of the revolver.

Overall this is a really outstanding example of a 100% complete and correct the Massachusetts Arms Company Adams Patent Pocket Revolver. The gun is really gorgeous and the attractive, high-luster blue finish really makes the gun standout. This will be an absolutely stunning addition to your collection of high-condition Civil War era pocket revolvers and pistols. This is a gun that is really worthy of being displayed in a Mass Arms casing, and is a pistol that you will likely never want to upgrade. In fact, it might be nearly impossible to upgrade the condition and eye appeal of this lovely pre-Civil War percussion pocket pistol.