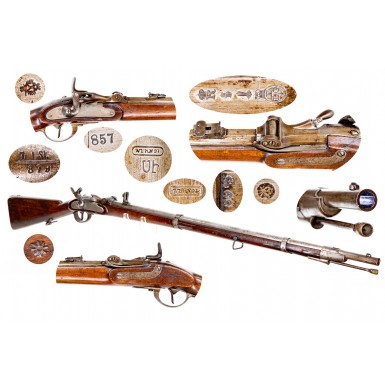 On June 14, 1866 the Austro-Prussian War broke out, and at the end of the seven-week conflict, the badly beaten Austrian military was convinced the era of muzzleloading military arms was over. The Prussian forces were armed with the Dreyse Needle Rifle, a breechloading bolt action rifle and the Austrian forces were still using muzzleloading M1854 and M1862 Lorenz rifles and rifle muskets that were simply no match for the Prussian firepower. As a result, the Austrian military immediately looked for a way to modernize their small arms. While an appropriate breechloading design was being developed, the Austrians did what nearly every major military power had down during the 1860s; they looked for a way to alter huge existing stocks of muzzleloading arms to breechloaders.

The system adopted by the Austrians was developed by Viennese gunmaker Franz Wänzl. His modification was similar to the American “trapdoor” system developed by Erskine S. Allin. A new breech section was machined with a hinged door that lifted up to reveal the chamber. The breech section included a cartridge extractor and included a locking system to prevent the “trapdoor” from opening when the gun was fired. A sliding bolt at the rear of the receiver was engaged by the action of the hammer, and this bolt locked the breech block closed when the hammer was in any position other than full cock. Thus, at the half-cock and fired positions, the breech block door was securely bolted in the closed position. A spring-loaded firing pin was machined through the trapdoor at an angle and allowed ignition of the 14mmx33R rimfire (and later centerfire) Wänzl cartridge. The gun retained their original 13.9mm (.547”) bores, from when they were muzzleloading arms. The cartridge adopted used a 13.9mm 458 grain projectile with a 1.3” long straight-walled rimmed case. While I could not find loading information on this cartridge, presumably the ballistics were similar to the original muzzleloading cartridge, as no changes to sight regulation have been noted on most of the Wänzl alterations that I have observed, although some are found with upgraded sights. These guns are likely those that were still in use during the 20thcentury, and the new sights were most likely added to account for improved ballistics from the use of more modern propellants.

During the latter part of the 1860s some 70,000 Austrian arms were altered to the Wänzl system by Steyr, primarily M1854 and M1862 Lorenz Rifle Muskets. However, some M1854 and M1862 Jägerstutzen rifles as well some Extra-Corps carbines were also altered to the system. The Wänzl alterations were rather quickly superseded with front line troops with the M1867 Werndl Breechloading Rifle, but the Wänzl remained in use in limited capacity for reserve and rear echelon troops through the end of World War I! In addition to use by the Austro-Hungarian Empire, the Wänzl saw use with the Qing Dynasty during the latter part of that empire’s rule. Wänzl rifles saw use during the Herzegovina Uprising of 1882, the Boxer Rebellion, the Balkan Wars, and as noted the Great War.

Offered here is an about FINE condition example of an Austrian M1854/67 Wänzl Infantry Rifle. The M1854 Lorenz Rifle Musket was the first of the percussion ignition “System Lorenz” arms that was adopted by the Austrian Army and was subsequently replaced by the more refined M1862 Lorenz Rifle Musket. The primary upgrades were a slightly improved and more rounded lock that more close approximated the British Enfield, and the use of steel, rather than iron, for the barrel. Like all of the System Lorenz family of arms, these were percussion ignition, muzzleloading weapons with 13.9mm bores. The M1854 and M1862 Infanteriegewehr Rifle Muskets had a nominally 37 ¼” (947mm) round barrels secured by three spring-retained barrel bands. The rifle musket was produced in two variants, with one equipped with a fixed block rear sight and the other with a flip up, long-range leaf rear sight. As with most Austrian arms of the period the M1854 and M1862 were both iron mounted and had beech stocks.

As noted, this Austrian M1854/67 Wänzl Infanteriegewehr remains in about FINE overall condition. The gun is 100% complete, correct and original and retains crisp markings throughout. The lock is clearly dated 857 forward of the hammer, indicating original manufacture in 1857. A very clear, {Double Headed Austrian Eagle} is stamped to the rear of the lock plate. The breech block and rear part of the gun’s action is stamped with an oval cartouche that reads WERNDL. Franz Josef Werndl was a Steyr (Austria) based gunsmith who took over the iron gun parts making company of his father in the late 1850s, eventually forming Werndl & Co in 1864 which would morph into the joint stock companyÖsterreichische Waffenfabriksgesellschaft in 1869, the basis for the Steyr Arms (AG) company. The forward part of the breech is marked behind the rear sight with several markings. These include the letter K over an {Austrian Eagle} in a depressed cartouche, over the number S68 at the base of the breech block. The “68” is a reference to the year of alteration, 1868. The buttplate tang bears Austrian unit markings and rack number as well, which reads .7 L.SP./879. To the best of my knowledge this unit mark refers to the 7th  Landwehr (Home Guard or Reserve) Sappeur (Sapper) and Pionier(Pioneer) regiment, with the gun number “879”. The gun also has a series of Liege proof marks on the receiver that suggest it was later one of the many M1854/67 Rifles sold off to foreign buyers when the Austrians removed the arms from their arsenals. The presence of a rudimentary “sun” symbol on the obverse butt, a circle with eight lines radiating from it, suggest this is one of the guns that saw use with the Qing Dynasty at the end of the 19th century and possibly during the Boxer Rebellion as well.

All of the metal retains relatively crisp edges and lines. The iron barrel and mountings have a medium pewter patina with a mottled oxidized brown patina over most of the surfaces. The metal is mostly smooth with some scattered pinpricking and darker surface oxidation that gives the gun a mottled appearance with darker and lighter patches of metal. There are also some areas of light pitting here and there and some small patches of slightly rough surface oxidation. The metal also shows the usual scattered minor impact marks that are typical of a military rifle that severed for several decades, with the marks on the lower barrel band being most obvious. The action of the rifle works crisply on all positions, and the breech mechanism, including the extractor, works correctly as well. The bore of the rifle is about FINE and might be improved further with a good scrubbing. The bore is about mostly bright with some patches that are duller and with some patches of moderately oxidized discoloration. There are some areas of lightly scattered pitting along its length and a few small areas of more moderate pitting here and there. The rifle retains its complete, original and fully functional upgraded rear sight, as well as the helical Lorenz pattern front sight and bayonet lug on the forward portion of the barrel. It also retains its original, full-length and fully threaded ramrod (now a cleaning rod) and both original sling swivels from the alteration to Wänzl. The stock is in close to FINE condition as well, and remains solid, full-length and free of any breaks or repairs. The stock does show numerous scattered bumps, dings, impact marks and minor surface mars, but nothing indicative of damage or abuse, just real-world use. There is a chip of wood missing behind the breech tang, which is the result of improper barrel removal. There is also minor slivering and splintering along the edges of the ramrod channel, a common issue with all Lorenz pattern arms that saw any level of use due to the tight channel.

Overall, this is a really nice, solid example of an Austrian M1854/67 Wänzl Infanteriegewehr. The gun is complete and original throughout and remains in relatively crisp condition with nice unit markings. These guns had a very long service life, from the late 1850s through the end of the World War I period and were a stop-gap attempt to bridge the gap between the era of muzzleloaders and breechloading military rifles. This would be a great addition to any collection of 19th century European military long arms and is a good transition piece to show the transformations from muzzleloaders to breechloaders. It would be particularly appropriate to display with a British Snider alteration and a French Tabatière alteration, both variations on the same theme from the same period. The potential that the stock marking is a Qing Dynasty mark makes the gun even more intriguing.