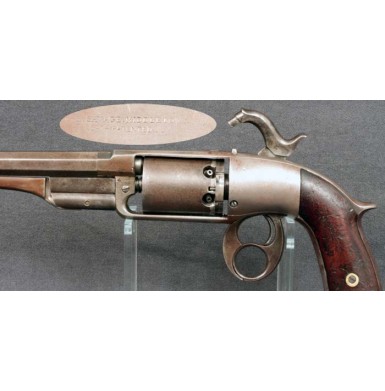 This is an extremely rare example of the North-Savage 2nd Model Figure 8 percussion revolver. This gun was one of the predecessors to the well-known Civil War era Savage “Navy” revolver. The North-Savage Company traced its lineage to the famous Simeon North, who established his arms making company in Berlin, CT during the late 1790’s. The company moved to Middletown, CT in 1811 and North continued to produce rifles, muskets and pistols on contract for the Ordnance Department for many years. The same year that North moved his factory, he partnered with his brother in law Josiah Savage, in order to obtain additional capital. Upon Josiah Savage’s death his son Edward took over the family interest in the business. North’s son James took over his father’s interest in the business in 1831 and remained the principle in charge of the company until his death in 1856. At that time, Edward Savage became the sole owner of the company, as James North’s son Henry had never been made a partner in the company. Henry worked for Savage and was instrumental in the development of what would become the Savage Navy revolver. Henry North was issued US Patent #15,144 on June 17, 1856 for an improvement on his earlier 1852 patent for a revolving gas seal pistol, that reduced gas leakage between the cylinder and barrel by forcing the cylinder forward to engage the forcing cone of the barrel and creating a nearly gas tight seal. Savage delivered a prototype “Figure 8” revolver to the Washington Arsenal for evaluation in June of 1856. The initial report by Major Bell of the Ordnance Department was encouraging enough for Colonel Craig of the Ordnance Department to place an order for 100 of the unique “Figure-8” revolvers for actual field trials. The order was placed June 17, 1856 and the 100 revolvers were delivered on June 20, 1857. All but 1 of these revolvers was in the field for trial use by US cavalry units within a year. The guns utilized a unique self-cocking action that rotated the cylinder and cocked the hammer by pulling back the lower ring trigger of a “Figure-8”. The upper trigger then fired the pistol in a conventional fashion. These test revolvers were chambered in .36 caliber, the same as the Colt M-1851 “Navy” revolvers then in service with the US military. North & Savage produced approximately 450 of these “Figure-8” revolvers between 1856 and 1859. The revolvers were produced in three distinct model variations (some say four). The first model was produced with a brass frame with a round cross section, and a conventional swinging link loading lever. The second model was produced with a round iron frame and new ratchet action loading lever. The third model was produced with the same ratcheting loading lever, and a flat-sided frame, taking on an appearance much akin to the more often encountered Savage Navy revolver. These guns are encountered with both the brass and iron frame, and with the iron framed guns sometimes designated as fourth model guns. It is estimated that about 250 of the first type revolvers were produced, with 100 of these being the Ordnance Department test revolvers. About 100 of the second model were produced, and another 100-200 of the third / fourth model were produced. In reality the guns appear to have been produced in both brass and iron for the majority of their production life, with modifications and improvements being added as the guns evolved. The serial numbering system is noted as “confusing” by most arms historians, but the system seems to be simply a serial number range for brass framed guns and one for iron-framed guns. These numbers probably remained separate and consistent for the entire production run of both brass and iron framed guns, with the improvements being added as they were adopted during the manufacturing process. Based upon extant examples, the rounded iron frame revolvers (2nd Model) are among the scarcest of the “Figure-8” variants.

This 2nd Model North & Savage Figure 8 Revolver is in VERY GOOD+ condition. The gun is 100% complete and correct in every way. The gun is mechanically excellent and functions perfectly in every way. The lower ring of the “figure-8” rotates and indexes the cylinder as it should and cocks the hammer. The upper trigger releases the hammer to fire the pistol. As with all North-Savage pistols, the gun is a 6-shot, .36 revolver with a 7 ““ octagon barrel and is rifled with 3 grooves with a 1 in 48 rate of twist. The pistol is marked on the top strap in two lines: E. SAVAGE, MIDDELTOWN, CT. / H.S. NORTH patented JUNE 17th, 1856. The last part of the bottom line is somewhat faint and difficult to read after the “N” in June. The revolver bears no other markings, except for the serial number 2 which is faintly visible on the bottom of the grip frame, on the head of a screw in the trigger assembly and stamped inside of both grip panels. This seems to indicate that this revolver was the second of the rounded iron framed revolvers produced by the North-Savage Company. The revolver retains some scattered minor traces of its original blued finish, blending with a smooth brownish & pewter gray patina. The edges of the octagon barrel remain crisp and sharp. The metal forward of the cylinder shows a few minor impact marks and some very minor light scattered pitting. The cylinder shows a couple of minor impact marks on its side as well. The balance of the metal is essentially smooth with only some very light scattered patches of minor pinpricking and peppering. The case hardened hammer shows some light traces of original color, with a smooth mottled brown patina overall. All of the original cones (nipples) are in place in the cylinder and are in very good condition. The loading lever functions as it should and locks securely into position when not in use. All of the screw heads are in fine condition, showing only minimal slot wear. The bore of the revolver is in GOOD+ to NEAR VERY GOOD condition and retains strong rifling, with scattered light to moderate pitting along its entire length. The two-piece walnut grips are in about VERY GOOD condition. They are free of any breaks or repairs. There are a couple of minor grain cracks present, one near the bottom center of the left panel and a couple of surface grain cracks on the interior of the grip panels. All of these are stable and do not appear to be in danger of expanding or worsening in any way. There is also a small chip of wood missing from the upper edge of the left grip panel, along the upper leading edge. The chip is very difficult to see due to its location, but it is mentioned for exactness. There are six "kill notches" carved into the top edge of the right grip panel and the letter Z lightly carved in the left grip panel. The grips are solid and shows a number of minor bumps and dings from handling and use, but no issues other that those minor ones noted above.

Overall this is a really solid and complete example of an early US percussion revolver that is very rarely encountered for sale. With only 100 of these revolvers estimated to have been manufactured, it could well be years before another example is available on the market. For a collector of unique, secondary US martial arms, this is a great opportunity to own an extremely scarce revolver in very good and un-messed with condition. The rarity of the pistol will allow it to figure as a centerpiece in your advance US revolver collection. The last one of these pistols that I saw for sale was priced in excess of $10,000! This is great example that requires no apologies and is priced nearly 25% lower!