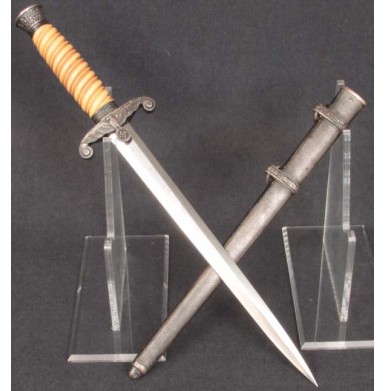 This is a VERY FINE example of the Nazi Army Officer’s Dress Dagger as approved for wear by all of the army officer’s of the Third Reich. The dress dagger was approved for wear in 1935 and was intended to replace the sword or dress bayonet for full dress occasions. The dagger was 40cm in overall length and had a plastic grip that was secured by a screw on pommel cap. The grips varied in color from nearly pure white to ivory and even deep pumpkin orange. Genuine ivory grips were available for additional cost, if the officer was willing to pay for them. The dagger blade was typically plain, polished steel, although etched and Damascus blades were available at additional costs. The blades were normally marked on the reverse with a maker’s mark, although later war daggers appear with unmarked blades. The cross guard depicted the typical Nazi National Eagle, clutching a Swastika surrounded by a wreath in its talons. The pommel cap and grip mount above the cross guard were adorned with raised oak leaf patterns. Initially the dagger mounts and scabbard were silver plated, although later war production daggers usually dispensed with this finish. The sheet steel scabbard typically had a pebble grained texture embossed on the body. The scabbard had two hanger rings retained by oak leaf embossed suspension bands. The scabbard throat was retained by a single screw on the reverse of the scabbard.

The Nazi Army Officer’s Dress Dagger is really a striking example of the excellent German craftsmanship that typified German dagger production prior to World War Two, and during the first couple of years of combat. The dagger was manufactured by the famous Solingen cutler Eickhorn and is clearly marked on the reverse ricasso of the blade: ORIGINAL / (Squirrel Logo) / EICKHORN / SOLINGEN. The blade retains the majority of its original bright finish and much of the original cross polish. The blade is full length, finely pointed, and free of any pitting or corrosion, showing only some minor scabbard wear and a handful of light surface scuffs. The silver plated mountings have a really lovely, untouched and tarnished appearance. The only loss of tarnish is along the high edge of the pommel cap. The look is really quite striking. The celluloid grip has a rich, deep, creamy ivory color that is very striking as well. The grip is in fine condition and is free of any breaks or repairs. The grip shows only some light wear and gouges or chips. There is a tiny, and hardly noticeable hairline surface crack at the juncture of the grip and mount at the cross guard. This is about 1/8” long and is only mentioned for exactness. The fit of the grip, mounts and blade are excellent and the dagger is 100% original and had no replacement components. The silver plated scabbard is in very fine condition as well, showing the same dark, tarnished appearance as the dagger mounts. The suspension rings are both present and the scabbard is free dings or dents.

Overall this is simply a gorgeous example of a Nazi Army Officer’s Dress Dagger in just fantastic condition. The dagger is untouched and unaltered and has a brilliant blade with a fine maker’s mark. This is a dagger you will be very proud to add to your display and is one that you will never have to make any apologies for. It has a great look, displays well and is all original with no replacement parts or alterations. What more can you ask for on a Nazi dagger”