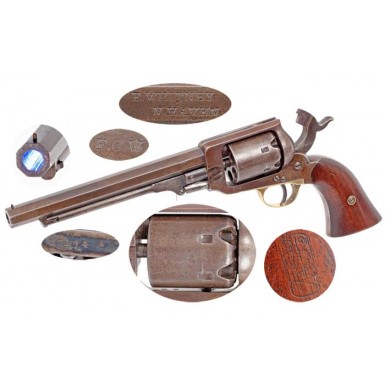 This is a NEAR FINE condition example of a US Navy marked Whitney “Navy” revolver. The percussion 6-shot, .36 caliber, single action pistol is what is known as a 2nd Model, 4th Type by collectors, and generally applies to the revolvers that fall into the 15,000 to 25,000 serial number range. About 33,000 of the Whitney “Navy” revolvers were produced from late 1850’s through the early 1860’s and quite a number of them (more than half of the 2nd Model production) ended up seeing use by the US military during the Civil War. The robust design of the gun, which included a top strap, made them much sturdier than the Colt models that it competed with. The US Navy purchased some 3,450 Whitney “Navy” revolvers during the US Civil War. The guns were relatively late additions to the Navy’s small arms arsenal, with the initial order being placed in February of 1863. Additional orders continued through the rest of the year and into 1864. The majority of the Whitney Navy revolvers delivered under these contracts were not marked USN or with naval inspector marks. The exception being the approximately 900 guns delivered between February and May of 1863 and inspected by Frank C Warner (FCW), a civilian arms inspector working for the Washington Navy. In February of 1864, an additional 42 Whitney “Navies’ were inspected and test fired by William Jeffers at the Washington Navy Yard. It appears that all other Whitney Navy revolvers that bear US Navy markings were guns that were marked after the war. These were revolvers that were returned to the various Naval Yards from ships stores of small arms. At this time, many of the guns were refurbished, repaired and were then inspected and marked with an Anchor on the top barrel flat, forward of the frame, and often with the inspectors’ initials on the face (or side) of the cylinder. Whitney “Navy” revolvers saw significant service with the North Atlantic Blockading squadron during the course of the American Civil War, and many of the guns can be identified by serial number in Navy documents.

This US Navy marked Whitney “Navy” Revolver is in about NEAR FINE condition. It is one of the very scarce 900 revolvers delivered between February and May of 1863 and is inspected by Frank C. Warner. The gun retains strong traces of original finish, but probably less than 10%. The blue is confined to the nooks, crannies and protected areas of the frame and barrel. The two largest patches of blue are under the barrel where it meets the frame, and in the top strap groove. The balance of the gun has a wonderful plum-brown patina. The metal of the gun is almost entirely smooth throughout, with only some lightly scattered patches of minor pinpricking, mostly on the front edge of the frame, in front of the cylinder chambers. The loading lever retains about 10%+ of its original case coloring, with a very bright, and vivid patch on the top of the lever where the serial number is stamped. The gun appears to be 100% complete and correct in every way and bears strong markings throughout. The serial number 22474 A is clearly stamped on the bottom of the barrel and on the loading lever. The number is stamped on the rear of the cylinder a couple of numbers at a time on the stops between the cones (nipples). These numbers are much fainter, and omit the “A” suffix. The serial number is also stamped inside both of the grip panels. The gun is marked with the US Navy inspection initials of Frank C. Warner. A deeply struck F.C.W. is present on the lower left portion of the frame, below the cylinder. The left grip also bears a very crisp and clear script FCW in a cartouche. The top of the octagon barrel is clearly stamped: E WHITNEY / N. HAVEN in two lines. Typically Whitney Navy revolvers retain no cylinder scene, due to the harsh service that they saw. Even Whitney Navy revolvers that did not see hard use typically have weak or non-existent scenes due to how lightly they were applied. This gun retains about 60% of its cylinder scene that includes an eagle, lion, lined shield and a naval engagement. The action of the revolver is mechanically excellent and the gun times, indexes and locks-up exactly as it should. All of the original cones (nipples) are present, and are in good, usable condition. The original brass-post front site is in place at the end of the barrel and is in fine condition as well. The bore is in about NEAR FINE condition. It is mostly bright, and retains fine, crisp rifling. The bore does show some lightly scattered pitting along its entire length, with a couple of small patches of more moderate pitting noted. The original arbor pin retention thumbscrew is in place and still operates, although it is rather tight and needs some encouragement to rotate. The hammer retains some very light traces of case coloring, which have faded and blended to a pewter gray and plum-brown patina. The small brass trigger guard (correct for this model) has a pleasing dull mustard patina. The two-piece oil finished walnut grips are in about VERY FINE condition. They are complete and solid with no breaks, cracks or repairs. The left grip has a wonderful FCW script cartouche. The grips doe show the normal expected bumps and dings from service and use, but show absolutely not abuse.

Overall this is a really great example of a scare US Navy used Whitney “Navy-Navy” that was inspected by Frank C Warner. All US Navy items from the Civil War are extremely scarce, and this is a really crisp and well-preserved example. High condition Navy marked revolvers from the Civil War are almost impossible to find, and this is one of the best condition Whitney “Navy-Navies’ that I have seen in a very long time. The fact that it is one of the 900 guns inspected by Frank C Warner makes it even more rare and desirable. This will be a fine addition to your collection of Civil War naval arms, or to a collection of martially marked Civil War secondary martial revolvers.