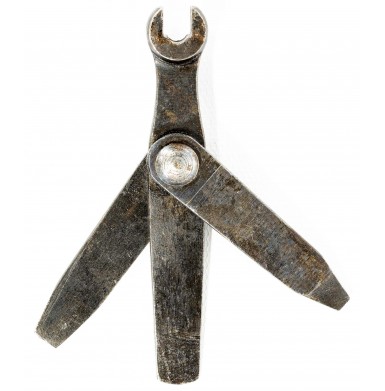 Every soldier who served in the Union Army during the American Civil War was issued a number of small tools to be able to maintain and clean his service weapon. Assuming the gun was a US Model 1855 Rifle or Rifle Musket, or a Model 1861 Rifle Musket, a private would have been issued the following:

If the solider was a non-commissioned officer, he would also be provided with the following tools for repair and maintenance of the rifle musket:

The last two tools were necessary to take the gun completely apart, something that the average private was discouraged and typically forbidden from doing!

The US Model 1855 Combination Tool was originally adopted for use with the US M1855 rifle & rifle musket. The tool featured an open-ended cone (nipple) wrench, and three screwdriver blades (one fixed and two pivoting). The smallest screwdriver blade was designed to remove the clean out screw from the bolster of the rifle or musket. These tools remained in use through the US M1861 series of rifle muskets, as well as for use with the contract maker produced M1861 muskets. With the acceptance of the Special Model 1861 muskets from Colt, Amoskeag, and LG&Y, a new tool, with only one pivoting arm was adopted as the M1861 tool. Since these muskets eliminated the clean out screw in the bolster, the new tool eliminated that extra screwdriver blade. The M1861 tool remained in service through the various M1863 and M1864 models and was finally replaced by the M1866 Allin Conversion tool which was actually manufactured by modifying old stores of M1855 tools. Many more M1861 tools were produced than M1855 tools, and most of the surviving M1855 tools were modified after the Civil War for use with other US military long arms during the Indian War era. As a result, original M1855 combination tools are quite rare today and are not regularly offered for sale.

This tool is in about FINE condition. It retains about 50%+ of its original dull blackened finish, with some very lightly scattered minor surface oxidation present. The finish shows some thinning from age, handling and use and there is some more obvious finish loss from wear on the domed rivet and the along the sharp edges and contact points of the working parts of the tool. Both of the pivoting screwdriver arms are present and move freely. The open-ended cone wrench has crisp edges and shows only minimal wear. This would be very nice tool to add to the display of your US M1855 or M1861 Rifle Musket, and about 20% cheaper than where they are normally priced.

Please note that the images below are much larger than the actual tool to allow condition and details to be seen clearly. The tool measures 3.54” in length, with the two pivoting arms measuring 2.4” for the larger screwdriver and 2.37” for the smaller screwdriver.