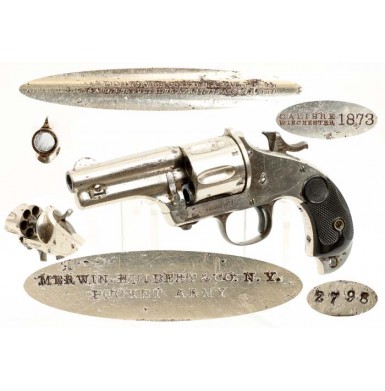 The right side of the frame is also marked in a two lines:

The serial number 2798 is present on the right side of the “skull cracking” grip frame. Like the majority of Merwin, Hulbert & Company arms, the gun is assembly numbered on the major parts. In this case the left side of the frame (under the grip), the rear face of the cylinder, the rear face of the lower barrel web, and the cylinder arbor pin are all numbered 2959. The right grip panel is also scratch numbered 2959 on its interior. As noted, the gun is truly in near excellent condition. Overall, the revolver retains about 80%+ of its original nickel finish. There are some very tiny areas of minor flaking and bubbling scattered over the entire revolver, much like lightly scattered pinpricking on a blued gun. A small amount of nickel has flaked and thinned on and around the around the muzzle, at the front sight, and on the face of the cylinder, face of the barrel web and inside the frame. The flecked bubbling and loss is fairly evenly distributed over the entire surface of the revolver. The loss here is a combination of light holster wear and probably from real world use. The areas of loss have developed a smooth, oxidized brown patina. The overall condition of the revolver and its finish is clearly represented by the photos below. Due to the highly reflective nickel finish and the photographic lighting, there are some reflected anomalies that look like various colors on the pistol. These colors are not actually present on the gun and are only the reflected optical illusions from objects in my office. As is typical of 19th century nickel finishes, the finish shows some minor frosting from age, giving some of the areas a slightly dull or milky color. The bore of the revolver rates about GOOD and is very dark with visible rifling along its entire length. The bore shows moderate pitting along its length. The hammer retains about strong traces of case hardened colors, with the expected fading and wear. The trigger guard retains strong traces of the original case coloring as well, but it is even less vivid and has a more mottled dark gray patina than found on the hammer. The trigger retains about strong traces of its original fire blued finish as well. The revolver is in fine mechanical condition and the single action mechanism works exactly as it should. The revolver cycles, indexes, times and locks up very crisply and tightly. The locking system of the revolver works correctly as well, with the forward portion of the frame, barrel and the cylinder unlocking, rotating and sliding smoothly forward as they should. The revolver mechanism does not retain any “suction” (where the action draws itself closed about halfway after it has been opened and released), but still operates smoothly and correctly. The mechanism locks the gun up securely, exactly as it should. All of the screws remain relatively crisp and sharp with very little slot wear noted. The innovative sliding loading gate functions smoothly and opens and closes exactly as it should. The two-piece, checkered hard rubber grips bird’s head shaped grips are in about VERY FINE to NEAR EXCELLENT condition. As is typical of 19th century hard rubber grips, their original black color has toned slightly to a sort of dark chocolate tone, which is more noticeable in bright light. Under normal light the grips still look quite black. The grips are very crisp and the checkering remains very sharp with only minor wear noted. The grips are solid and complete without any breaks, cracks, chips or repairs. As noted earlier, the right grip panel is scratch numbered to match the assembly numbers on the gun.

Overall this is a really wonderful example of the scarce and popular Merwin, Hulbert & Company 2nd Model Pocket Army Revolver. The pistol is simply very nice to look at and the pictures probably don’t do the overall condition of the revolver justice. The open top, scoop fluted Frontier Army revolvers were only made for a few years, during the height of American western expansion, and are difficult to find in any state of preservation, let along in NEAR EXCELLENT condition. These large frame, short barreled “Pocket Army” Merwin, Hulbert & Company revolvers saw use by the good, bad and the ugly during America’s westward expansion and are an important part of old west firearms history. Every serious collection of pistols from the American West needs at least a couple of Merwin, Hulbert & Company revolvers in it, and this one would be a really fantastic addition to your collection. Over the last few years the prices of Merwin, Hulbert & Company revolvers have steadily increased, along with their desirability and popularity. Very high condition examples of the large frame revolvers are commanding higher and higher prices every day, and often result in strong competitive bidding at auctions. This is a great chance to add a truly great condition Merwin, Hulbert & Company Frontier Army to your collection. It is a gun that can truly be the centerpiece of any serious old west revolver collection. Until about 2 decades ago, these revolvers were underappreciated and even today they remain undervalued. With Colt Single Action Army revolvers in this condition regularly bringing high low to mid five figure prices at auction, I don’t think it will be long before the much rarer Merwin, Hulbert & Company guns start to give the Colt Single Actions a run for their money in the value department. Don’t miss your chance to own an exceptional quality Merwin now, before the prices double over the next few years.