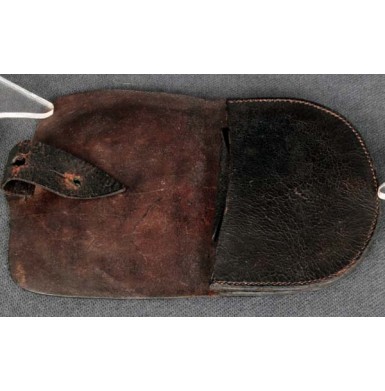 This is a really fabulous example of a very scarce Civil War cartridge pouch that I have never before had the opportunity to offer for sale. In fact, I have never seen one of these unique items anywhere except in period images or museums. This pattern of pouch is seen in images of period Civil War images of Massachusetts Volunteer Infantrymen, but their true pattern has always been somewhat mysterious. This is partially because no very good and truly accurate modern references are available on British Military Accoutrements.

This very interesting cartridge pouch is clearly of English manufacture and design. It appears to be an early pattern Ball-Bag (often referred to as an Expense Pouch, but this is post 1866 British military term), likely for use with the Brunswick Rifle. The first mention of Ball-Bags of this pattern that I have been able to locate is in the United Service Journal - Volume 157 (December 1841) (A British military journal of the time). On page 570, while discussing the accoutrements in use for the new percussion weapons of the various branches of British service, it states that Rifle Regiments are supplied with the tin magazine only, the caps for immediate use being carried in a pocket attached to the ball-bag of the Rifleman’s accoutrements. This would indicate that this version of the ball-bag was initially issued to riflemen only, and only those carrying the Brunswick Rifle would have had need of a pouch that contained a “cap pocket”. Ball-bags had seen use with the flintlock Baker Rifle as early as about 1800, but they were of a different pattern, without a cap pocket and were intended to only carry greased balls. With the coming of the percussion era, the purpose of the ball-bag was to carry 10 cartridges for immediate use, as well as the accompanying percussion caps. The cartridge box (or pouch in British terminology) was a magazine for carrying wrapped packages of cartridges, much like they were carried in the bottom portion of US cartridge box magazines (tins). The more commonly recognized pattern of Ball Bag was adopted with the British Military accoutrement pattern changes of 1860. This pattern of bag is seen in images of British soldiers of the era, as well as some Confederate soldiers, and both the body and front flap have a rounded profile, as well as an internal loop to hold a zinc oil bottle. However, I have never seen ANY images of any British soldiers wearing the pattern of Ball-Bag that I am offering here. What I have seen are a number of period images (some identified) of Massachusetts Volunteer Infantrymen wearing this shield front pattern ball-bag. In fact I have attached a couple of pictures of this pattern of ball-bag in use by the 6th Massachusetts Volunteer Infantry, while in the field in 1862-1863 (from the MOLLUS-Massachusetts collection at the US Army Heritage & Education Center). The image clearly shows the soldiers using all English pattern accoutrements.

At the beginning of the American Civil War, the State of Massachusetts secured the services of Francis B Crowninshield on behalf of Governor John Andrew of the state of Massachusetts to obtain arms and accoutrements from Great Britain. Crowninshield was appointed by Andrew to procure 25,000 stands of arms and related equipment for the state in April of 1861. Crowninshield arrived in England on May 6, 1861 and during his visit managed to procure approximately 19,000 Enfield rifle muskets and about 10,000 sets of accoutrements. Crowninshield was competing with US and CS arms purchasers, as well as various other state representatives. In the end, he managed to procure or contract for about 15,000 P-1853 rifle muskets directly from various Birmingham arms makers, and purchased an additional 1,000 from the State of New York. Crowninshield managed to place an additional order for nearly 6,000 Enfields the following year. These arms and accoutrements were issued to a large number of Massachusetts Infantry Regiments. The State of Massachusetts maintained very good records of their Ordnance Stores & Equipage. Contained within the Annual Report of the Adjutant General of the State of Massachusetts, dated January 1, 1863 is the Report of the Master of Ordnance (Schedule O). On page 16 of that schedule, a number of English Accouterments are listed as being in store in the Massachusetts state armories. Included in this list are two lines which read: Cap or Loading Pouches, English, Black.One line lists 392 of the pouches and another line (presumably another Ordnance storage location) lists the same item with a total of 1,996 on hand. That puts a total of 2,388 of these pouches on hand for issue in the State of Massachusetts, not counting the pouches already issued and in the field.

The Massachusetts Infantry Ball-Bag offered here is in VERY FINE condition and is 100% complete, correct and original. The pouch has a shield shaped front flap that is approximately 6” wide and varies in height from 4 ““ to 4 “, at the point of the shield front. The body of the pouch is 5 ““ wide by 4” tall. The closure tab is 4” in length and has two holes punched in it, allowing the use to adjust the tightness of the closure depending on how full the pouch was. The cap pocket on the interior of the pouch is 3” wide by 2” tall and has a closure tab that extends from the front flap and passes through a small strip of leather on the front of the cap pocket. The pouch has two belt loops on the rear, both are approximately 13/16” wide and will accept a belt that is roughly 2 ““ wide. A single brass finial is located on the rear of the pouch for the closure tab to attach to. The pouch is VERY FINE condition. The thin bridle leather remains in wonderful, supple condition. The exterior of the pouch retains the large majority of its finish, with only some minor finish loss, but quite a bit of mild crazing. All of the stitching remains tight and intact, and the brass finial is securely attached to the rear of the pouch. This same pattern of finial was used on the later pattern ball-bags as well. The bag is completely unmarked, and bears no British Military ownership or acceptance marks. More than likely the pouch was part of a leftover supply of bags that were no longer acceptable to the British government after the pattern change. This made it available for commercial sale and the Crowninshield purchasing trip was perfect opportunity to unload old pattern accoutrements to a willing buyer.

These Massachusetts used ball-bags are very scarce and are practically never offered for sale. I am only aware of less than a half dozen examples extant today and I honestly cannot remember ever seeing one for sale. The bag comes from a very advanced collection of English import arms and accoutrements that were used during the American Civil War, and has not been on the market for at least 30 years. Whether you collect Civil War accoutrements, English import items, Massachusetts related items or simply want to add this to your Enfield display, you have the opportunity to purchase a truly rare item. While the price may seem a little daunting, when you realize that this is the only example available, and it is priced in the range of a mid-grade Confederate Cap pouch (which is a much more available item), it truly seems to be a good deal. For any collector whose collection revolve around Massachusetts regiments that received English accoutrements, this is simply a “must have” item.