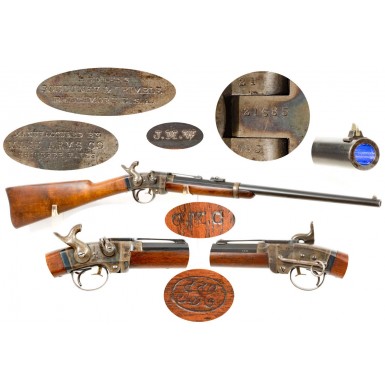 This is a wonderful displaying example of one of the more popular and successful of the patent breech loading carbines used by the US military during the American Civil War. Approximately 35,000 of the .50 caliber Smith Carbineswere manufactured in Massachusetts by three contractors, with some 31,002 being delivered to the Ordnance Department during the course of the war. The guns were produced by American Machine Worksof Springfield, the Massachusetts Arms Companyof Chicopee Falls and the least common variation was manufactured by American Arms, also of Chicopee Falls. During the war these carbines saw extensive use and were issued to the 1stConnecticut, 7th& 11thIllinois, 1stMassachusetts, 6th& 9thOhio, 7th& 17thPennsylvania and 3rdWest Virginia cavalry regiments, among others. The Smith was well thought of in field, with the majority of the officer’s responding to the 1863-1864 Ordnance Department carbine survey rating it either “Best” or “Good”. Of the eighty-six respondents, 73% found favorably for the carbine, and only 14% thought negatively of it. The biggest complaint revolved around excessive breakage of the breech latch on the top of the gun, which was most likely the result of poorly heat-treated spring steel. The Smith did yeoman’s service on the first day of the battle of Gettysburg, as two of General Buford’s regiments (the 17thPA & 3rdWV) were armed with the Smith during the opening of the battle.

This Smith Carbineis one of the Massachusetts Arms Companymade guns and rates VERY FINE overall, retaining very nice case coloring and excellent original blue as well. The gun is well marked throughout, with all markings remaining crisp and clear. The left side of the receiver is clearly marked in three horizontal lines above the sling bar:

and in three vertical lines forward of it:

The left side of the barrel is crisply marked with inspector initials J.M.W. near the receiver. This is the mark of Springfield Arsenal civilian sub-inspector John M. White. The top of the stock comb, forward of the buttplate and the underside of the forend both bear the block letter sub-inspection G.K.C., the mark if civilian sub-inspector George K. Charter. The left wrist of the carbine is crisply stamped with the script JHinspection cartouche of Joseph Hannis. The carbine has the matching serial number 21685 on the bottom of the barrel and receiver. While the serial number was not found in the Springfield Research Service four-volume serial number book set, based upon the records that are listed, the gun was probably produced and issued during the latter part of 1864.

As previously mentioned, the carbine is in about VERY FINE condition overall. The barrel retains about 85%+ bright original blue, showing only some high edge wear, some thinning and minor handling loss. The barrel is almost entirely smooth, with the metal free of any significant pitting.  There is some scattered surface oxidation and some patches of very minor roughness and light pinpricking present on the barrel. The receiver retains about 70%+ of the original vivid case coloring. The receiver retains nearly complete coverage, but the case colors are starting to dull and fade. The most brilliant areas are on the reverse where the sling bar is located, and at the front and rear of the obverse of the receiver. There is some freckled oxidation on the obverse around the hammer and bolster area, as well as some minor pinpricking. This is the only area that shows significant loss of case coloring. The rear band of the receiver retains about 80%+ of vivid fire blued finish with only some minor fading and flaking, and the breech latch on top of the receiver retains slightly less of the vivid fire blue, mixed with some tiny patches of scattered peppering and minor oxidation, as well as some oxidized roughness along its edges. The trigger guard, tang and barrel band all have a smooth plum-brown patina with some gray tones. The iron buttplate has a mostly smooth plum brown patina. The lock functions very crisply, working exactly as it should and is mechanically excellent. The breech locking system works correctly as well, and remains very tight and crisp, with no wiggle or end-shake. The bore is in EXCELLENT condition and is mirror bright, with extremely crisp rifling. The bore shows only some minor frosting in the grooves and is free of any pitting or oxidation. The gun retains the original long-range, flip-up rear sight, the original front sight base and the original sling bar and ring. The original German silver front sight blade is in place as well. The original cone (nipple) has also been replaced with a stainless steel shooting cone. The stock is in about VERY FINE+ condition no breaks, cracks or repairs. Both the buttstock and the fore end show the usual bumps, dings and mars from actual use in the field. The cartouche and sub-inspection marks in the stock remain quite crisp and legible. The stock does show the usual scattered bumps, dings, surface mars and minor scuffs that are typical of a carbine that saw some real world use. The stock is free of any excessive wear or significant damage and shows no indication of having been sanded or abused in any way.

Overall, this is an extremely attractive, 100% original example of Civil War period Smith Carbine. The guns shows some real world use, but remains in much nicer condition than many are typically encountered in. This gun would be a wonderful addition to any Civil War carbine collection or would probably be a real tack driver on the N-SSA firing line. The gun displays very well and looks great with a lovely case colored receiver and a fantastic blued barrel. This is a carbine that any collector would be proud to own and needs to make no excuses for.