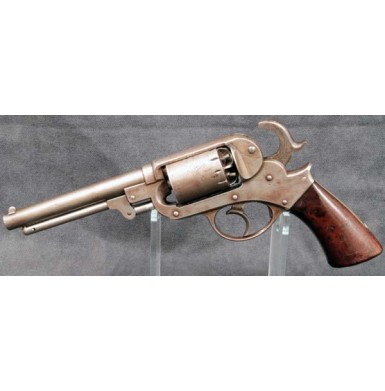 The Starr M-1858 “Navy” percussion revolver is a rarely encountered percussion pistol from the American Civil War era. While its larger caliber brother, the M-1858 “Army” is a commonly encountered piece, with some 23,000 having been produced, only 3,000 of the .36 “Navy” revolvers were produced, making them quite scarce on today’s market. Even Flayderman notes in his description of the Starr 1858 Navy revolver that “The Navy is the most difficult Starr revolver to acquire, due to its limited production in comparison to the Army types.” Of those 3,000 revolvers, 2,002 were purchased by the US government. However, very few of those pistols were marked with government inspector marks, as the majority of them were acquired on the open market and not via Government contract. In fact, it is reasonable to believe that only 562 of the revolvers would have been subjected to the standard government inspection process and would have been marked in any.

The M-1858 Starr revolver was the result of patents and design work of Ebenezer Starr, whose family had been engaged in the arms making business since the 1790’s, and had received US Government arms contracts for much of that time. Starr actively sought government contracts for his improved “self cocking” pistols, as well as his breech-loading carbine and in early 1858 he submitted sample pieces to Washington Navy Yard for trials. The initial trials of the .36 caliber “double action” revolver were promising enough for the Ordnance Department to place an order for 500 of the revolvers at a rate of $20.00 each (including appendages) on November 24, 1858. Starr quickly went to work establishing a new company, the Starr Arms Company of Binghamton, NY to produce the revolvers and possibly his carbine design, which he felt would be contracted for soon as well. After nearly two years of work establishing the factory, and acquiring the necessary machinery and tooling, the initial order of 500 Starr M-1858 Navy revolvers were ready for inspection and delivery on December 15, 1860. John Taylor was dispatched from the Ordnance Department to inspect the revolver and found that Starr had not proved them. Furthermore, he quickly determined that the guns would not pass a 25-grain proof test, nor even remain functionally reliable after more than a few firings of the 20 grain service load! Taylor left the Starr factory, looking for instruction from Col. Craig of the Ordnance Department in how to proceed, and no further Starr revolvers were inspected prior to the outbreak of the Civil War. With the coming of the war and the pressing need for military revolvers, the Ordnance Department finally accepted these original 500 revolvers on August 8, 1861. During 1861 the Ordnance Department acquired an additional 1,250 Starr Navy revolvers on the open market, and in January 1862 they purchased 150 more from William B Hartley. As was the common practice at the time, none of these additional 1,750 pistols were subject to inspection or marking in any way. The only other order for Starr Navy revolvers from the Ordnance Department was for the Navy. In the fall of 1861, 100 pistols were shipped to the Navy for inspection and acceptance. Forty of the pistols went to the Washington Navy Yard on December 4, 1861, and sixty went to the New York Navy Yard. The 40 sent to the Washington Navy Yard (all in the 26XX to 28XX serial number range) were all rejected due to various defects. The biggest complaint was that the caps tended to come off the cones and foul the mechanism, locking up the revolver and rendering it inoperable. The 60 sent to the New York Navy Yard were accepted into service. Based upon the above information, it appears that only the 2 sample revolvers from 1858, the 500 from the 1858 contract and the 60 accepted by New York Navy yard would have received any government inspection marks. All other guns purchased by the Ordnance Department would have been unmarked. This means that less than 1 in 5 Starr Navy revolvers would have received US government markings.

The Martially Marked Starr M-1858 “Navy” revolver offered here is in about VERY GOOD condition and comes with an original, period US military holster as well. The pistol appears to be one of the later Navy purchased arms, as it is not marked with the JT cartouche found on the original 500 pistol order, but is rather bears cartouches that appear to read LES and HBJ. The “LES’ is unknown to me and I cannot find any reference to it. The “HBJ” should be H.B. Johnson who worked in 1861-1862 and his mark is found on Remington Beals Navy revolvers. Additionally the serial number 2290 places the gun in the latter portion of the production run of these pistols. The pistol is sub-inspected with the letter B on the barrel, frame, grip strap, cylinder and triggerguard. The pistol is clearly marked on the frame with the usual Starr Arms information. The right side of the frame reads STARR ARMS Co. NEW . YORK . and the left side of the frame reads STARR’s PATENT JANE 15, 1856. The serial number 2290 appears on the bottom of the barrel (hidden by the loading lever), on the cylinder, on the hammer, on the frame under the hammer, on the bottom of the frame near the hinge and on the trigger. The pistol retains no original finish to speak of, with only some very scant traces visible in the most protected areas. The metal shows a mostly smooth dove gray patina with some light age staining and a thin, lightly oxidized brownish patina beginning to form. The metal shows some scattered areas of light peppering and minor pinpricking, as well as a few bumps and dings from service. The hammer retains about 30% faded and muted case coloring. The bore of the pistol rates about VERY GOOD, with good rifling and some light scattered pitting along the length of the bore. The action of the pistol functions well for a Starr double action and the gun indexes and times well. The trigger return spring is a little weak and sometimes, after cycling the pistol, the trigger must be pushed the rest of the way forward to reset it for the next shot. Otherwise, the pistol is in fine mechanical condition. The loading lever functions smoothly and locks into position, as it should. The knurled knob that secures the upper portion of the frame to the lower portion operates as it should and the pistol easily breaks open for cylinder removal. The one-piece walnut grips rate about GOOD+ to NEAR VERY GOOD. They show the usual bumps and dings from service, as well as two fairly legible cartouches. They appear to be free of breaks or repairs. There is a patch of what appears to be old wood filler in the base of the grips, likely filling the usual gouges and chips that accumulate there from the use of the pistol as a hammer over the years”..Thankfully the filler is not too obnoxious and really does not materially detract from the display of this very rare revolver. The pistol is contained in a US military full flap holster that was manufactured for the Starr Double Action revolvers. The holster rates about GOOD+ overall. The leather is solid and pliable, but shows some crazing and finish loss. The closure strap is torn and very well worn. The holster is clearly marked in three lines: MADE BY / J.I. PITTMAN / N-Y. The holster shows some minor stitching loss, along the edges, but most of the stitching remains in tact. There are a couple of very old, possibly period of use, repairs to the missing stitches, in the form of brass rivets. These riveted repairs add to my belief that the pistol saw naval use instead of cavalry use during its Civil War service. Holster has a wonderful period look to it, and this pistol has clearly been with it for a very long time, as the holster has molded to the shaped of the pistol and the Starr Navy cylinder is ““ longer than the Army cylinder, so clearly it was a Starr Navy that has been in this holster all of those years.

Overall this is a really attractive example of a very scarce US martial revolver from the American Civil War that clearly saw service. Martially marked Starr M-1858 Navy revolvers are rarely found for sale on the market, and as a result they are missing from most Civil War revolver collections, even very advanced ones. The addition of the well-marked martial holster for this revolver is a really great bonus for the collector. Overall, this is a very nice and complete pistol that will be a great addition to your Civil War martial revolver collection. The fact that it may be one of the incredibly scarce Navy purchased pistols only enhances the rarity, collectability and value of the pistol even further.