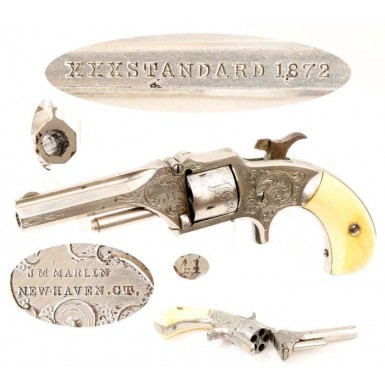 When the name Marlin is discussed in the field of firearms, the initial though it typically of their lever action rifles with brilliantly cased hardened receivers that competed with Winchester during the peak of western expansion during the 1880s. The second thought is typically of their Marlin-Ballard single shot rifles that developed a reputation for accuracy and ruggedness during the latter half of the 19th century. However, it was small handguns, that were the genesis of the company, and were its primary product line during its first decade in business. John Marlin was born on May 6, 1836 in Boston Neck (near Windsor Locks, Hartford, CT). He went to work for the Hartford based Colt Patent Firearms Manufacturing Company sometime during the 1850s and 1863 he left the firm to start his own firearms manufacturing business. The first products offered by Marlin were small, single shot, derringers offered in a variety of rimfire cartridge chamberings. The guns were brass framed pocket weapons with barrels that pivoted sideways for loading and unloading, similar to the Colt 3rd Model (Thuer) derringer that would be offered several years after Marlin’s guns had been on the market. They also produced a percussion alarm gun in rather limited quantities during their first 2-3 years in business. In 1869, with the expiration of the Rollin White patent on the bored through cylinder, Marlin introduced the “O.K.” Pocket Revolver in .22 rimfire short, followed quickly by the Marlin “Little Joker”. Both were solid-frame, seven-shot, single-action, spur-trigger pocket revolvers with bird’s head grips. Both models were produced in relatively small quantities (about 2,000 and 1,100 respectively) and were gone from the product line by the mid-1870s. In 1872 Marlin introduced his first really successful handgun, the XXX Standard 1872. The XXX (which was a reference to the .30 caliber chambering) was a tip-up revolver (similar in design to the Smith & Wesson #1 and #2 revolvers) and was chambered for .30 rimfire. The revolver was a five-shot single action gun with a spur-trigger bird’s head grips. The standard barrel length was 3”, although custom lengths (both shorter and longer) were available by special order. As originally produced the revolver had a ribbed octagon barrel, and an unfluted cylinder. Like most handguns of the era the standard finish was nickel plating with wood grips. However, half-plate finish (silver frame & blue barrel) were offered for extra cost, as well as fancy grips like pearl or ivory. Only about 500 of these earliest XXX revolvers were produced, before the Marlin company changed over to a ribbed round barrel, but retained the unfluted cylinder. Again, about 500 units were produced and another change took place, replacing the plain cylinder with a short fluted one. These guns sold extremely well, with about 10,000 being produced between 1873 and 1876. The final change came not long after, with the cylinder and frame lengthened about 3/16” and the length of the flutes extended as well. About 15,000 of these guns were also produced, through 1876 when the XXX was dropped from the product line, to be replaced by the newly designed Models 1875, 1878 and eventually 1887 revolvers. However, the end of XXX (and its sister revolver the .22 caliber XX) coincided with a new direction for the Marlin company, where it would have its greatest success. In 1873 the assets of the Brown Manufacturing Company were sold at auction due to foreclosure. Brown had held the patent rights to the Ballard patent breech loading rifle and these rights, along with the machinery to produce the rifles (along with many parts finished and unfinished) were acquired by New York arm dealer and investor Charles Daly. Daly approached John Marlin about taking over the machinery, parts and production of the Ballard rifle, with the arrangement that Daly’s company Schoverling & Daly would hold the exclusive distribution rights for the guns. Daly also invested in the Marlin company and eventually became president of the firm. In 1881 the firm was reorganized as the Marlin Firearms Company and that same year they introduced their first lever action rifle, the Model 1881. Over the next twenty years a variety of successful lever action competitors to the various Winchester designs would be launched, and while the company never reached the sales and production output of Winchester, they certainly earned a reputation for manufacturing quality firearms. As the last decade of the 19th century approached, interest in single shot rifles waned, and the Ballard line of single shot rifles was dropped around 1890-1891. In 1893 John Marlin bought back Daly’s investment, and retained sole ownership of the company. In 1899 handgun manufacturing was discontinued to focus on the production of lever action rifles and pump action shotguns. In 1901 John Marlin died, but his two sons continued the company and expanded it by acquiring the Ideal Cartridge Reloading Company. In 1915 the company was sold to a New York based investment syndicate and became Marlin-Rockwell. During the First World War the company concentrated its manufacturing efforts on machine guns. At the end of the war the company did not return the manufacture of sporting arms and sort of withered and died, relying on its service department and reloading tool division to carry it. The company was reorganized in 1921 as the Marlin Firearms Corporation but failed and was sold at auction in 1923. This time the company was purchased by Frank Kenna and production of sporting arms soon resumed. The firm divested themselves of the Ideal Reloading division in 1925, selling it off to Lyman and invested the funds in upgraded production lines for firearms. Today the company remains in business as one of America’s longest running firearms manufacturers and is still owned by the Kenna family.

The left side of the barrel web, forward of the cylinder is marked in two lines:

The revolver is in EXCELLENT overall condition. All of the markings remain crisp and sharp and the gun is 100% complete, correct and original. The gun retains about 93%+ of its original nickel plated finish on the barrel, with only some minor flaking and minimal finish loss. The finish loss is in the typical areas, along the sharp edges and contact points where it has lightly flaked and within some of the areas of engraving and roll marking. The largest single area of minor flaking and loss is on the face of the muzzle. The brass frame retains a similar amount (or slightly more) of its original nickel finish, with only some minor loss due to wear along the edges of the frame, at the trigger sheath and at the grip to frame juncture. The case hardened hammer retains traces of its case hardened mottling. It has a medium smoky gray patina with traces of the blue and purple hues from the case coloring as well as some flecks of brownish oxidation and darker mottling from the faded colors. The barrel, cylinder and frame are all nicely factory hand engraved in a Nimschke influenced New York engraving style, with flowing floral splays and punch dot background shading. The barrel is primarily engraved on the web, with some flowing lines near the muzzle and a sunburst spray near the chamber. The rear of the plain cylinder is engraved with floral splays with a punch dot background of the same pattern found on the barrel web and the frame. The frame is primarily engraved on the side plates with the same type of floral splays found on the barrel and cylinder, as well as with a star and flowing lines along the backstrap that recall the designs found at the muzzle, bringing engraved motifs of the entire revolver together into harmony. The engraving is tasteful and extremely well executed and only serves to embellish the revolver. The bore of the revolver is in about GOOD+ to NEAR VERY GOOD condition. It retains strong rifling but also shows significant pitting scattered along its length, which varies from light in some areas to more moderate in others and bordering on severe in still others. The revolver is mechanically EXCELLENT and functions perfectly. The gun times, indexes and locks up exactly as it should and remains tight and crisp. The hammer cocks securely into place and responds appropriately when the trigger is pulled. The factory smooth ivory grips are in EXCELLENT condition as well and have a wonderful, mellow creamy color to the them with yellow tones. The grips are solid, complete and undamaged with no breaks, chips or repairs. As is expected with antique, 19th century ivory grips, they do show some minor surface lines that can technically be called cracks, but are really just the grain of the ivory showing as stress lines along the surface and are neither structural nor unattractive. As mentioned the grips are appropriately numbered to the gun. They fit perfectly and really enhance the overall appearance of this wonderful little revolver.

Overall this is just a wonderful example of the earliest variant of the Marlin XXX Standard Model 1872 Pocket Revolver. The gun is in a simply wonderful state of preservation. It retains nearly all of its factory original finish, has wonderfully executed factory engraving and has a gorgeous set of factory ivory grips. As this is the first model with a ribbed octagon barrel and a plain cylinder and is numbered 41 it was clearly one of the very first Marlin XXXs produced, and as it does not have the July 1, 1873 patent date information found on the later production guns, its production most certainly predates mid-1873. This is simply a splendid little revolver from the early 1870s, and likely was carried in the pocket of a very well to do person, who could afford the extra cost of the ivory grips. The condition of the bore suggests that is actually saw some use, possibly scaring off some brigands or footpads in the streets of New York, or even somewhere out west like Dodge City. These earliest Marlin XXX guns are rarely found in this condition, and with only about 500 produces are not often encountered at all. This would be a simply wonderful addition to any advanced collection of pocket revolvers, early American west era handguns or Marlin firearms. I am quite certain that you will be very pleased with this purchase and will enjoy adding it to your collection and displaying it for others to enjoy as well.