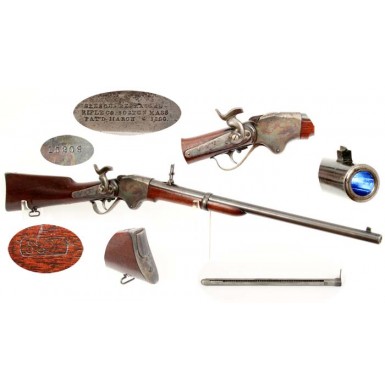 There is probably no one weapon of the US Civil War that is more representative of the overwhelming force of industry and technology brought to bear by the North against the South than the US M-1860 Spencer Carbine. Various single-shot, breech-loading percussion carbines were the standard issue cavalry long arms prior to the war, and most these guns remained in heavy use through the closing days of the war. However, the Spencer firmly established era of the repeating metallic cartridge carbines by the end of 1863. The “horizontal shot tower”, as some affectionately referred to the Spencer, was in essence the original assault rifle. While the Henry Rifle offered more rounds in the magazine, the .44RF Henry round was essentially the ballistic equal to a pistol cartridge. The .52 caliber 56-56 RF Spencer round was much more comparable to a real service rifle load and delivered far greater downrange stopping power. The Spencer was also very fast to reload, with a 7 round tubular magazine that fed through the buttstock, troopers could carry pre-loaded magazine tubes and reload almost as quickly as today’s shooter exchanges them on a modern magazine fed rifle or pistol. While the Spencer shooter did have to manually cock the hammer for each shot (the Henry had a speed advantage here, since the toggle action that operated the bolt to eject and load a new round also cocked the hammer), the robust design and powerful cartridge combined to make it the most prized and most feared cavalry long arm of the American Civil War. Roughly 50,000 of these carbines were produced (in the 11,000 to 61,000 serial number range) between 1863 and 1865 and almost all of them saw service during the war. After the war, many were altered and modified at US armories and many remained in service through the early 1870’s. The primary alterations were the addition of the Stabler “Cut-Off”, and lining the barrels to accommodate the new US military standard metallic cartridge, the .50 Government Rim Fire (aka 56-50 Spencer). The Stabler device was a small switch located in front of the trigger that activated a magazine cut-off. This allowed the carbine to be used as a single-shot breechloader for slow, aimed fire, and left the contents of the magazine in reserve for when more rapid firepower was needed. This was the first time that this type of device was used by the US military, and the concept of a magazine cut-off would remain central to US repeating rifle designs through the 1930’s, and the feature was incorporated into such famous US rifles as the M-1892/96/98 Krag and the venerable M-1903 and M-1903-A3 designs. The adoption of the 50 Government Rimfire round allowed the US military to standardize ammunition for their breechloading carbines. However, this required the Spencer carbines that remained in service after the Civil War to have their barrels sleeved to the new, smaller, .50 caliber, and the new sleeve was rifled with 3 wide grooves instead of the Civil War era 6 narrow grooves. Other than the small Stabler switch in front of the trigger, there are no readily noticeable features to differentiate an un-altered Civil War Spencer from post-war altered one. Only about 11,000 of the 50,000 Civil War purchased Spencers were altered between 1867 and 1874, so they are not very commonly encountered. With the adoption of the M-1873 Trapdoor series of arms, the Spencers were finally consigned to the fate of all “obsolete” arms, and were eventually sold out of government stores. Many of the guns saw significant use in the hands of Americans who moved west for a better life after the Civil War.

This is an about EXCELLENT example of the US M-1860 Spencer carbine. The gun is 100% complete, correct and original in every way. The gun is one of the 11,000 gun modified with post-war alteration. There has been a Stabler cut-off added and the original 6-gorove .52 caliber bore has been sleeved and re-rifled to .50 caliber 3-groove. The action works perfectly, both in terms of cycling the breech and cocking and firing the gun. The gun retains its original sling ring and buttstock swivel. The original rear sight is in place and flips up as it should, and the original alteration iron block and blade front sight is present as well. The gun retains very crisp and clear markings on the receiver, the top of which is marked in three lines: SPENCER REPEATING - / RIFLE CO BOSTON, MASS, / PAT’d MARCH 6, 1860. The serial number 15208 is very clearly stamped into the rear of the upper receiver, in front of the buttstock joint. This is a relatively early production serial number indicates the gun was manufactured and delivered no later than the end of 1863. A check of the 4-volume Springfield Research serial number book set reveals the closest noted serial number to be #15202, an M-1860 carbine issued to Company E of the 7th Pennsylvania Cavalry.

The gun is in about EXCELLENT overall condition. It retains about 75%+ of its original vivid case coloring on the receiver, which has faded around the edges and contact points, and darkened on the reverse of the receiver. The lock plate retains a similar amount of vivid case coloring. The hammer retains about 60% of its case coloring, which has dulled and blended with a smoky brownish gray patina. The receiver and hammer show some lightly oxidized freckling and pinpricking, the result of the caustic flash from the mercuric primer compounds used in the 56-56 and 56-50 Spencer cartridges. The buttplate also retains a significant amount of original case hardening, showing about 60% of its original mottled coloring, which has also faded and blended with a soft tobacco brown patina. The barrel retains about 80%+ of what is probably an arsenal refurbished blue, applied when the gun was altered after the war. The finish shows some thinning and streaky areas of loss, revealing a soft pewter-gray metal color underneath. The barrel is mostly smooth throughout with only some small, scattered areas of light peppering; pinpricking and some minor pitting and oxidized freckling near the muzzle. The rear sight retains most of its original blue and many of the screw heads retain 50% or more of their original fire blue as well. Overall the metal is very crisp and sharp, and the overall level of finish is quite superior to most Spencer carbines encountered today. The .50 bore retains strong 3-groove rifling and rates about EXCELLENT as well. The bore is brilliantly bright, with excellent rifling and its condition matches the outside of the gun very well. Only some very light pinpricking and very minor pitting is noted, scattered along the length of the bore. The original magazine tube is present with the gun and is also in EXCELLENT condition. The coloration of the Civil War era smooth magazine cap (not a grooved, M-1865 style cap) matches the case hardened buttplate perfectly, suggesting the carbine and tube have always been together. The tube is in excellent physical and mechanical shape and functions smoothly. The stock is in EXCELLENT condition as well. While it is not typical to find a carbine with visible cartouches, they were normally are obliterated by sling wear in that area, this one has a crisp and clear ECW in script on the wrist to the rear of the sling bar. The initials are those of Armory Sub-Inspector E.C. Wheeler, who inspected many Spencer rifles and carbines during the Civil War. The buttstock is very crisp with fine, sharp lines. It is solid and is free of any breaks, cracks or repairs. It is not uncommon to find Spencer carbines with significant cracking in the buttstock due to the structural weakness of the buttstock magazine tube. It is nice to see one without that problem. Both the buttstock and the forend do show some scattered bumps and dings from service and use, but there are no significant wear issues or any damage worthy of note.

The overall condition of this Spencer is really outstanding, and it is not easy to find a Spencer in this condition for sale these days. This is a really attractive M-1860 Spencer Carbine that is 100% complete, correct and original and has tons of eye appeal. The gun is an original Civil War carbine that was altered after the war and probably saw at least some use on the frontier during the early part of significant westward expansion and the early Indian War era. This is a truly outstanding, “no apologies’ Spencer that would be a fantastic addition to any Civil War collection. Even if Civil War carbines are not your area of collecting interest, no collection of Civil War arms is complete without a Spencer. If you were to only have one carbine, no other one is the carbine most associated with the American Civil War. It will also be very difficult for you to find a higher condition Spencer for sale, without spending significantly more money.