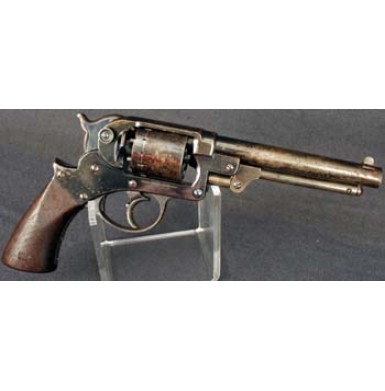 This is a near excellent example of the unique Starr Model 1858 Army “Double Action” revolver. While the design was innovative and way before its time, the self cocking mechanism was delicate and expensive and lead to the Starr company dropping the model in preference to a cheaper and more robust single action design, the Model 1863. Although referred to as a “double action” revolver, the large trigger actually only cocked the hammer and rotated the cylinder, it did not fire the gun. Pulling the large trigger all the way to the rear pressed a very tiny recessed trigger that actually released the hammer to fire the gun. During the time it was produced, approximately 22,000 Starr M-1858 Army revolvers were produced, with about 16,100 going to fill US government contracts. The remaining production (about 6,000 or about 27%) were sold commercially to the public. This particular gun is one of those government contract models and has two excellent US military cartouches on the grips and has the typical US sub-inspector stamps on the primary sub-assemblies of the gun.

The gun is a 6 shot, .44 caliber revolver with a 6” barrel. The action is very crisp and works well. The gun is mechanically tight and times and locks up perfectly. The serial number 8620 is readily visible on upper (under the hammer nose recess) and lower sections of the frame, the cylinder and the trigger and face of the hammer. The US Sub-inspector initial H appears on numerous parts of the including the frame, barrel, cylinder, etc. The frame is crisply and clearly marked on the right side:
STARR ARMS Co. NEW YORK
and on the left side:
STARR’s PATENT JAN. 15. 1856
The bore is brilliant and in apparently unfired, mint condition, It shows sharp rifling and the percussion cones (nipples) are all in excellent, crisp condition. The cylinder chambers appear un-fired and are perfect as well. The barrel retains about 30%+ original blue in streaks, mixed with a smooth gray-brown patina. This odd finish wear is typical of Starr’s, as their finishes tended to flake over time and present odd wear patterns. The frame retains about 90% bright brilliant blue finish, with some small areas of light scattered oxidation and minor peppering. The most finish wear appears on the very top of the frame. In fact the blue is so brilliant that while taking photos, I noticed that my red shirt reflected in the frame of the gun on several of the pictures! The cylinder retains roughly 50% original blue, mixed with a gray-brown patina, and the grip frame retains about 20% blue, faded to a smooth gray patina. The screws and the tiny recessed trigger retain about 90%+ vivid fire blue and are truly striking in appearance. The hammer retains about 90%+ brilliant case colors, and the loading lever retains about 70% bright case colors, with majority of the vivid color at the base of the lever and more fading present on the lever itself. The oil finished wood grips are in near excellent condition with only some minor light handling marks. The grips have two excellent and very clear inspectors cartouches.

Overall this is an outstanding M-1858 Starr Army and would be an excellent addition to any Civil War era handgun collection. This is a truly excellent revolver that you will never have to make any apologies or excuses for, and now I’ll just stop talking about it and let the pictures do the talking. SOLD