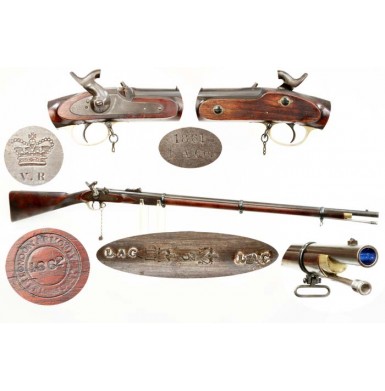 The London Armoury Company was established in 1856 with the sole intention to produce military pattern arms for the British War Department, as well as for export markets. The board of directors and shareholders of the company read like a “Who’s Who” of the 19th century English gun trade, and included (among others) Archibald Hamilton, Robert Adams, Richard Aston, James Kerr, John Deane and William Harding. London Armoury Company (L.A.C.) produced arms have the distinction of the being the only machine-made, fully interchangeable parts Enfields to be produced in Great Britain other than those manufactured at the Royal Small Arms Factory (RSAF) at Enfield Lock; England’s national armory. London Armoury Company guns are instantly recognizable by their brass lock escutcheons, which have rounded wings instead of the normally encountered square wings, the use of Baddeley Patent barrel bands in the lower and middle positions (as of 1862), and the use of wood screws with domed heads, instead of heads filed down to the contours of the gun stock and hardware. The Baddeley Patent barrel bands were an improvement over the standard Palmer clamping bands used on the typical Type III P-1853, and used a smaller, recessed tension screw and a more rounded profile of the band, to reduce the chances of the bands and screws catching on uniforms and equipment. These improved bands were adopted by the British military for the Type IV P-1853 Enfield, and became standard circa 1862. Only those arms produced at the London Armoury Company and at the Royal Small Arms Factory (RSAF) at Enfield Lock (the British National Armory) were manufactured with Baddeley bands during the American Civil War years. The high quality, interchangeable part guns from L.A.C. were very desirable acquisitions for both US and CS purchasers during the American Civil War, and both sides attempted to arrange to buy as many of these first-class muskets as possible. However, the British government also preferred the London Armoury guns to those produced by the other London and Birmingham contractors, and considered only the L.A.C. arms to be of the same quality as those produced at the R.S.A.F.. As a result, the majority of P-1853s produced by the London Armoury Company through mid-1862 (when their initial British contract expired), were delivered to the British War Department. Southern purchasing agent Caleb Huse certainly felt he had an inside track with the London Armoury Company, as the managing director was none other than Archibald Hamilton who was also the principle in the firm Sinclair, Hamilton & Company; a primary supplier of arms and equipment to the Confederacy. However, Huse’s post-war claim to have arranged for all L.A. Co arms not contracted for by the British Government to be delivered to the Confederacy is not quite accurate. He noted “I succeeded in closing a contract under which I was to have all the arms the Company could manufacture, after filing a comparatively small order for the United States agent. This company during the remainder of the war turned all of its output of arms over to me for the Confederate army.” The small contract that Huse was referring to was one for 1,300 (100 guns per week for 13 weeks) P-1853s entered into by L.A.C. and the State of Massachusetts in mid-1861, to be delivered at the rate of 100 guns per week for 13 weeks. Hamilton was apparently a businessman first and foremost, and a supporter of the southern cause secondarily. Even after the expiration of the British and Massachusetts contracts, some arms were still being delivered to US buyers. This is indicated by the fact that to date, the purchase of less than 3,400 London Armoury Company P-1853s can be documented by the Confederate invoices and receipts found in the McRae Papers. This number (when combined with the Massachusetts contract) essentially accounts for all the London Armoury Company’s excess production (arms other than those delivered on the British military contract) from mid-1861 to mid-1862. At that point, all the London Armoury production capacity of some 1,300 guns per month (or some 33,800 gun from July 1, 1862-December 31, 1862) was theoretically available for Confederate purchase. However, extant examples and period documents do not indicate anywhere near that number were delivered to southern buyers. Today, London Armoury produced P-1853 Enfields of any type are very difficult to find, and those with any Civil War provenance or markings are particularly difficult to located and extremely desirable. However, British military contract London Armoury P-1853s are relatively rare as well, due to the limited production of the gun when compared to the total numbers of “Enfields’ acquired by the British military during the 1860s. Early contract date guns, made in 1861 are particularly hard to find in good condition, as the London Armoury guns were designated as “First Class’ arms for use by the regular army. This means that L.A.C. guns tended to be issued and used by the British Army around the world and often saw hard use in harsh conditions.

This London Armoury P-1853 Enfield Rifle Musket is a scarce example of one an early production, very high condition British military gun. The gun is in about VERY FINE+ to NEAR EXCELLENT condition, and is absolutely gorgeous. The gun is clearly marked in two lines on the lock, forward of the hammer: 1861 / L.A. Co. and with the usual (British Crown) / VR to the rear of the hammer. The lock is plain, without boarder line engraving and has a plain hammer, without “feathers”. The lock has a tobacco brown and smoky gray patina, with some hints of faded case colored mottling in the protected areas where the neck of the hammer kept the lock plate covered. The interior of the lock retains about 60% of its original vivid case coloring. The interior of the lock is marked L.A.C over the mainspring and on the bridle, as well. The lock is mechanically excellent and is extremely crisp, functioning perfectly on all positions. The breech of the gun is marked with a pair of L.A.C. marks, as well as the usual British military Proof, View & Definitive Proof and inspection marks of a Crown over the number of the inspector. There is also a small A inspection mark on the breech, which was a London Armoury Company “in house” inspection mark. The barrel retains about 50% of its original blued finish which has a faded streaky appearance, with the balance of the metal on the barrel having developed a wonderfully smooth plum brown patina, reminiscent of a finely aged Winchester. The barrel shows some lightly scattered freckled oxidation and some very minor, lightly scattered areas of light pinpricking; mostly around the breech, bolster and muzzle area. The bottom of the barrel retains about 90%+ of its original bright, rust-blued finish. The bottom of the barrel is marked L 2 and the rear of the breech is marked with a (CROWN) / Z / 3 inspection mark, as well as with the number 860 Y. This same number is found on the breech plug as well. Additionally, the bottom of the rear sight leaf is scratch numbered 860 Y as well, mating it to the barrel. The gun has a NEAR EXCELLENT bore, which is mostly mirror bright and retains very crisp rifling with only some very minor frosting in the grooves and some very minor pinpricking along its length. The gun retains its original long-range rear sight, and the leaf is marked with a (CROWN) / Z inspection stamp. “Z” was the inspector code for London Armoury, while “Crown/B” indicated Birmingham, “Crown/E” indicated R.S.A.F. at Enfield, “Crown/A” America (for the Robbins & Lawrence “Windsor” contract guns), and “Crown/S’ was Solingen, Prussia. The gun retains its original upper sling swivel, mounted on the upper barrel band as well as its correct, original London Armoury Company lower swivel. The L.A.C. and R.S.A.F. swivels were rounded oval loops, while the swivels used by all other London and Birmingham contractors had a more trapezoidal appearance. An original snap cap (nipple protector) is attached to the lower sling swivel. The gun retains the correct barrel band configuration as well, with Palmer clamping bands throughout. This gun, with a production date of late 1861 (or very early 1862) would not have been equipped with the newly adopted Baddeley patent bands, which would become standard later in 1862. The bands all retain their original screw protecting lock washers on their ends. The bands retain about 85%+ of their original brilliantly blued finish. An original, correct ramrod is in the channel under the stock, and appears to be original to the gun. It is full length and retains its original threads at the end. The brass furniture has an attractive, medium mustard patina, and the buttplate tang bears the expected Crown/Z/# inspection mark. The gun also retains all the correct, original domed head mounting screws. The screws retain crisp slots and the majority of their deeply blued finish. The stock of the gun is in about VERY FINE+ to NEAR EXCELLENT condition as well, and is full length and solid, with no breaks or repairs noted. The obverse buttstock is crisply stamped with the usual London Armoury Company roundel, which reads: LONDON ARMOURY / BERMONDSEY around the date 1862 in the center. This date is the final assembly date, suggesting that the gun was completed in very early 1862, utilizing a lock manufactured at the end of 1861. The ramrod channel is also stamped L.A.C and well as with inspection marks. As would be expected from a London Armoury produced musket, the wood to metal fit is excellent throughout. The stock is extremely crisp and sharp throughout with outstanding edges and lines. The stock retains extremely crisp checkering at the wrist and forend that shows only the most minor handling wear. The stock shows the usual minor scattered bumps, dings, dents and handling marks that one would expect to find on a 150-years military long arm. Amazingly the stock shows on signs of abuse. The only condition issue worth noting is a tiny chip of wood missing just behind the upper barrel band, at the edge of the ramrod channel. This is barely even worth noting, but is mentioned for exactness.

Overall this is a really outstanding condition, 100% complete and correct example of a scarce London Armoury Company produced Pattern 1853 Enfield rifle musket. This is a scarce and eminently desirable gun to add to any advanced collection of British military long arms, or Patten 1853 Enfields, in particular. The gun is in wonderful condition and is extremely attractive, with the photos below not doing the condition of the gun justice. This gun is of sufficient quality to please the most discriminating collector and belongs in an advanced military arms collection.