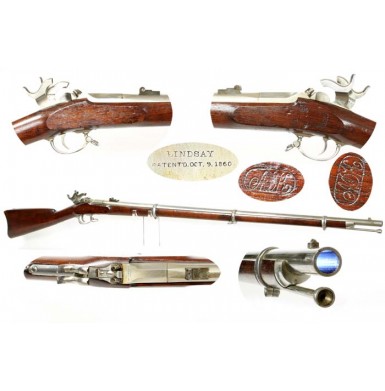 One of the more bizarre long arms to be officially adopted by the US Ordnance Department during the American Civil War was the U.S. Model 1863 Double Rifle Musket patented by J. P. Lindsay in 1860 (patent #30,332), and known to most collectors simply by the name Lindsay. The musket utilized the same superposed loading concept Lindsay had incorporated into the civilian handguns he had manufactured in New Haven, CT prior to the war, and the musket operated on the same mechanical principles as his handguns. The double hammer mechanism was mated to an auto-selecting single trigger, which would release the right hammer and then the left hammer on two consecutive pulls, not unlike a modern double-barreled sporting shotgun with a single trigger. The first hammer would fire the front chamber of the gun, and the second hammer would fire the rear chamber. This allowed the gun to be fired twice without reloading, but allowed it to retain a single barrel; which helped to keep it as light and handy as a standard percussion rifle musket. The concept worked fine in theory, but did not work so well in the field or with combat use. The system relied upon very careful loading, with the bullet from the rear most charge preventing that second powder charge from going off when the first chamber was fired. This did not always happen (especially when the musket was loaded quickly or under duress), and would result in both chambers detonating simultaneously “ usually with disastrous results for both the musket and the shooter. The other problem, which was equally disastrous, was that the long flash channel to the forward chamber could become fouled, preventing it from discharging. When the second charge was fired, with the first charge blocking the barrel, the results were often catastrophic. Either problem ensured a bad day for the gun and the soldier using it, and as a result the weapons were not well liked by the men they were issued to. The US Ordnance Department ordered 1,000 of these muskets in December of 1863, and they were all delivered by August 1864. It is possible that more were manufactured for private sale, as examples without US inspector cartouches are known. However, the more realistic reason for the examples without inspection marks is that those guns were probably the last of the muskets produced and were never accepted and inspected by the government due to their poor performance in the field. The only regiments known to have been issued the Lindsay Double Musket were the 5th, 16th & 23rd Michigan Volunteer Infantry, as well as to the 9th New Hampshire Volunteer Infantry. The 16th Michigan used them at the battle of Peebles’ Farm, which was fought at part of the Petersburg Campaign from September 30 through October 2, 1864. Reports from both the 16th Michigan and 9th New Hampshire indicate that some catastrophic failures occurred in the field, causing both injuries and deaths. The guns were fairly quickly condemned and withdrawn from service.

The U.S. Model 1863 Double Rifle Musket offered here is in about VERY FINE+ to NEAR EXCELLENT condition, especially for a Lindsay that appears to have actually seen some real use. As previously noted, they are often found without cartouches, and usually in pretty nice condition, indicating a lack of acceptance, issue and field use. This gun has two very crisp and clear ADK cartouches on the left stock flat, which indicate that it was inspected and accepted by the US Ordnance Department. These are the initials of civilian Ordnance Department sub-inspector Andrew D. King, who inspected contract arms from 1850 through 1865. The top of the breech is clearly marked in two lines:

The top of the buttplate tang is marked with a US. The rear of the barrel, near the breech, is sub-inspected with an L. The left side of the rear sight base is marked with an K sub-inspectors’ mark. All three barrel bands are sub-inspected as well, with an H on the reverse of each band. An H inspection is also present on the nosecap. The triggerguard is sub-inspected with an S at the rear of the tang, and the stock is sub-inspected behind the triggerguard with a T. Even the straight-shank, tulip-head ramrod has an R sub-inspection mark on its head. The musket is mechanically excellent and the complicated lock mechanism functions as well as the day the musket was accepted for military service. Both hammers crisply lock into the half and full cock positions, and the trigger releases the right-hand hammer first and then automatically resets to release the left hammer on the next pull. The barrel and iron furniture of the musket retain a lightly aged arsenal bright finish, with scattered age staining over the entire barrel and most of the furniture. The staining seems only to be a combination of old, dried oil and very light surface oxidation. The metal could probably be lightly cleaned to appear very close to its original arsenal bright finish with a little effort. The top of the octagon breech shows some very light peppering and pinpricking from cap flash. The hammers both have some very tiny patches of lightly oxidized age discoloration present on them as well. The original cones (nipples) are in place and are crisp; retaining about 80%+ faded and dulled original blue, with some light surface oxidation. The original pattern of 1861 rear sight is present, and retains about 50% original blue, with most of the fading and loss on the sight leaves, rather than the sight base. The original combination front sight-bayonet lug is in place near the muzzle of the musket. The gun retains both original sling swivels, as well as its original, and full-length ramrod, complete with fine threads on the end. The Model 1863 pattern screw clamping barrel bands are all crisply marked with their typical U for up on the obverse. The bore of the musket is in about FINE+ condition and remains very bright. The bore retains extremely crisp 3-groove rifling, but show some lightly oxidized pinpricking along its entire length. The stock rates about VERY FINE+ and is very crisp and sharp throughout with excellent edges. The stock is solid and full length with no breaks, cracks or repairs noted. There is a tiny chip at the base of the tang, where it meets the comb, but this is quite minor and mentioned for exactness. The stock shows no signs of having been sanded. The stock does have the usual array of scattered bumps, dings and mars from possible field use, as well as from handling and storage, but nothing significant worthy of mention. There is some minor slivering of the wood in the ramrod channel, which is typical of a military muzzle loader that actually saw any use in the field.

Overall this is simply a really great example of a very scarce US issued Civil War musket. Many of the M1863 Lindsay Double Muskets that were issued were either damaged or destroyed in the field, and wonderful, complete, martially inspected examples like this are rarely encountered. It is even rarer to be able to link a model of musket to a specific regiments, but all research indicates that the 5th, 16th & 26th Michigan Volunteer Infantry and the 9th New Hampshire Volunteer Infantry were the only regiments to be issued these muskets. Considering the small contract for these guns, the significant loss in the field and relatively low survival rate of these guns, examples of this quality are rarely found available for sale. This is a fantastic, 100% correct, original and wonderful gun that could truly be a centerpiece in even a very advanced Civil War infantry arms collection.