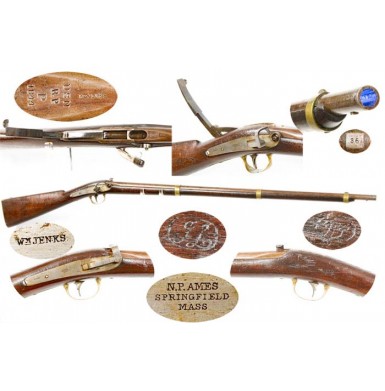 This is a NEAR FINE condition example of the scarce Jenks Naval “Rifle” as produced by the famous NP Ames Company of Springfield, MA. The Jenks rifle utilized a unique breech loading mechanism and a “Mule Ear”, sideways mounted percussion hammer mechanism. The system was invented by William Jenks of Columbia, SC and was granted US Patent #747 on May 25, 1838. During the early 1840s, the Navy experimented with a number of new small arms weapons systems, among those were both the Jenks Naval 36” barreled “rifle”, which the Navy actually referred to as a “long carbine” and the 24” barreled carbine. On August 31, 1841 the Navy Department ordered 1,000 of the 36” barreled “long carbines”, and in early September of 1841 they ordered 500 of the 24” barreled carbines. Eventually the Navy Department ordered a total of 4,250 of the shorter guns, but never ordered any additional 36” barreled Jenks carbines. The NP Ames Company of Springfield, MA produced all of the guns. This famous blade making company produced a limited number of firearms during the early 1840s on contract for the Navy Department. These included Jenks Naval carbine and rifle, as well as the M1842 “Box Lock” pistol. Ames delivered all of the rifle length arms between 1842 and 1844. During the period that the Jenks carbine system was in use by the Navy, ordnance records rarely distinguished between the longer barreled “rifle” and the standard length carbine. When the distinction was made, it was usually by referring to the rifles as “carbines “ long”. A December 1858 US Navy Small Arms inventory notes that a total of 5,452 Jenks carbines were accounted for, with 4,093 in the various Navy Yards and 1,359 on board ship. The inventory lists 202 more Jenks arms were purchased from Ames. This is due to the 1,000 additional 24” carbines that were purchased from Remington with the Maynard Tape Priming system during 1847 and 1848. Thus, the inventory reveals the loss of some 798 guns during the decade and a half the arms had been in use. This inventory does not differentiate between the two different barrel lengths or those with the Maynard priming system. In May of 1852, Commodore Matthew C. Perry specifically requested “92 Jenks Carbines “ percussion with bayonets (long)” for his upcoming mission to Japan but he did not receive them. According to Ordnance reports from the Navy during the per-Civil War and Civil War era Navy, which are published in James McAulay’s Civil War Small Arms of the US Navy & Marine Corps, “Jenks Carbines “ Long” are noted in the following inventories on the following dates:

The Jenks series of breech loaders appear to have been phased out of significant active naval service by the beginning of the Civil War. While Jenks carbines (with no indication of barrel length) are noted to have been part of the small arms stores of no less the twenty-five US Naval vessels during the decade leading up to the war, wartime inventories show the Jenks carbines were only part of the small arms stores of eleven vessels, including the Ice Boat, the Lancaster, the Mississippi, the Monticello, the Powhatan, the Sabine, the Saranac, the South Carolina, the St. Lawrence, the St. Mary’s, and the Susquehanna.

The Jenks Naval “Rifle” offered here is in NEAR FINE condition, and were is not for some tight grain cracks in the wrist area would rate “fine”. The gun is 100% complete and correct with no repairs or replacement parts noted. The gun is clearly marked at the rear of the lock plate: WM JENKS, and in the middle of the lock plate: N.P. AMES / SPRINGFIELD / MASS. The top of the breech is clearly marked: WM JENKS, and USN / RP / P / 1844. The 1844 date makes this among the last of the “long barreled carbines’ delivered on the contract of 1,000 arms. The interior of the breech lever is stamped with the numbers 14 / 23 and is scratch-numbered 103. These appear to be assembly marks. The reverse wrist of the stock is marked with two script cartouches with oval boarders. The rearward one is a very clear JL, with the forward one being a less clear RP. The “RP” cartouche is that of US armory sub-inspector Richard Paine who was detailed to inspect US Navy contract arms. The “JL” is the mark of US Navy Lieutenant Joseph Lanman who served as the final inspector of US Navy contract arms at the Ames factory during the 1840s. His mark is the US Navy equivalent of the final inspection cartouche applied to contract arms by officers of the US Ordnance Department.

The barrel of the gun retains about 20%-30% of the original browned finish, which has thinned and worn, giving the gun a somewhat streaky appearance. The balance of the barrel has a smooth brownish-gray patina, with some small, scattered patches of light surface oxidation and minor roughness. The case hardened breech lever retains about 50%+ of its original mottled case coloring in the protected areas within the action, and the exposed surface of the lever retains about 20% of the case coloring, most of which has dulled to a blue-black appearance. The case hardened lock plate retains some minute traces of mottled case coloring, with the majority faded to a silvery gray patina with some scattered flecks of surface oxidation. The bore of the rifle rates about FINE. It is mostly bright with sharp rifling along its entire length. There is some light to moderate pitting present in the last couple of inches of the bore, closest to the muzzle. The balance of the bore shows only some light scattered pitting and frosting in the grooves. The action of the rifle functions perfectly, with the breech lever operating smoothly and the mule ear hammer functioning crisply. The rifle remains mechanically excellent. The brass furniture has a lovely, golden patina that is very attractive. The original socket bayonet stud it present under the barrel and is stamped with the number 36, to match it with the angular socket bayonet that was fit to the gun. The guns and bayonets were apparently marked in groups of 100, with the numbers ranging from “0” to “99”. The bayonets received a mating code on their sockets as well. The rifle was not designed with sling swivels, saddle rings or provision for a ramrod or cleaning rod, and as such, none of these features are present. The slender walnut stock rates about VERY GOOD overall. These stocks are not known for their sturdiness, and it is not uncommon to find them broken and repaired, especially at the wrist. The delicate stock is free from any breaks or repairs but does show a series of tight grain cracks running through the wrist area. These all appear to be very tight and stable, with only the lowest one, closest to the triggerguard showing any real separation at all. They do not appear to be structural issues, and as noted are quite stable and solid. Thankfully they are primarily so tight that they are not immediately visible unless they are looked for under strong lighting. As would be expected, the stock does show a number of scattered bumps, dings and scrapes from use in service. There are a number of minor dents in the stock as well. These types of dings and mars are quite commonly encountered on 19th century naval arms, as the guns were often stored in arms racks aboard ship where they were exposed to impact with the racks (and sometimes other arms) due to the motion of the ship. The stock shows no indication of having been sanded and retains two visible cartouches on the reverse wrist, one quite clear and the other somewhat worn.

Overall this is a very crisp and attractive example of a very scarce US Naval “rifle”. These guns only rarely appear on the market for sale, and when they do, they are often well used and in rough condition. With only 1,000 rifles produced, extant examples are far from common. This gun is very well marked in the metal, retains two good cartouches, has a very nice bore and the delicate mechanism still functions perfectly. The gun shows actual use form being issued but does not show abuse. The rifle is 100% complete, correct and original. For any advanced collector of Civil War era long arms, this is a great opportunity to add a really scare Naval breech loading rifle to their collection. Whether your area of interest is simply Civil War era long arms, Civil War era military breech loading arms, or Civil War era Naval small arms, this gun will fill the bill as a great example of a rare gun, in very attractive condition.

I also currently have a correct pattern bayonet for this rifle available for sale. The bayonets are particularly rare, with only about a dozen believed to have survived to be in collections today. The bayonet fits the rifle perfectly and has a close number to that on the lug of the gun, being numbered “24” with the lug being numbered “36”.