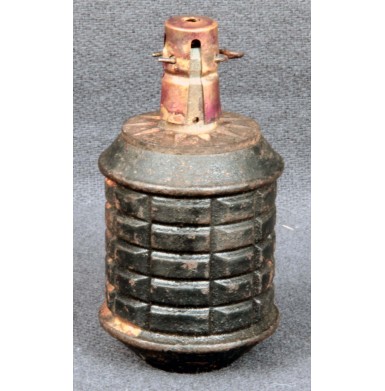 Here is a very nice condition example of the World War II era Japanese Type 97 Hand Grenade. The Type 97 grenade was adopted in 1937 and was simpler version of the earlier Type 91 grenade. The primary difference between the models was that the earlier Type 91 had a base that could be unscrewed for the attachment of a propellant charge, allowing the grenade to be used as a rifle fired grenade or from a grenade launcher, much like a small mortar round. The Type 97 had a serrated cylindrical body made of cast iron and painted black. The fuse body screwed into the top of the grenade and was made of brass and copper and was painted red. The body of the grenade was filled with pressed TNT and the black powder fuse delay system provided roughly 4 to 5 seconds of delay between the arming of the grenade and the explosion. The grenade was roughly 4” in overall length and 2” in diameter. It weighed about 1lb 3oz, when fully loaded with its explosive charge.

This grenade is in about VERY GOOD+ condition. The cast iron body retains about 70%+ of the original black paint. The body does have a few scattered patches of minor light oxidation, but this could be easily cleaned if so desired. Of course the grenade is disarmed and has no explosive contents anymore. The angled bottom of the grenade has the remains of what appears to be a lot number, painted in white paint. It is no longer legible. The screw in fuse system is mostly complete, but is of course missing the firing pin and the priming and ignition compounds. The brass cap, copper fuse tube body, creep spring and hairpin style safety pin are all present. The fuse system retains some traces of the original red paint.

Overall this is nice, complete example of the Japanese Type 97 Hand Grenade. It is a very nice displaying example and will look great in any World War II display of Japanese military items.