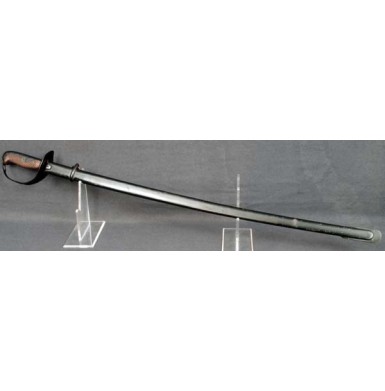 This is a VERY FINE condition example of the Japanese Type 32 Ko Cavalry Saber. These sabers were adopted on August 3, 1899 (Meiji Dynasty year 32), and were intended for issue to all enlisted men and NCO’s of the cavalry. A shorter version of the Type 32, the Otsu was issued to enlisted men and NCO’s of the Military Police and Transportation Corps, as well as Sergeant Majors of the Infantry, Engineers and Artillery. All of the Type 32 swords were manufactured at the Tokyo Artillery Arsenal (simply the “Tokyo Arsenal” after 1923) and the production of the swords ended in 1936. Even though the production of the sabers was ended in 1936, the swords were never removed from the authorized equipment regulations, and they remained in service through the end of the World War II. Like all Imperial era swords that were arsenal produced, the Type 32 was serial numbered. Numbers appear on the reverse ricasso and on the reverse scabbard drag. About 80,000 of the Ko sabers were produced between 1899 and 1936, with the lowest reported serial number being 1175 and the highest one being 83390. As originally produced the saber included a leather finger loop inside of the guard, which was riveted to the basket guard. These loops were eventually discontinued and late production Type 32 sabers often lack the loop and the mounting hole for the rivet. Swords that were refurbished at state arsenals often had the loops removed as well, and the rivet hole plugged. Refurbished swords were also often refinished, and mismatched scabbards were re-numbered to match their sabers at that time. The Ko had an overall length of 39 3/8”, with a 32 ““ blade. The sword had a checkered wood grip, secured by a single spanner screw. The sword was a mix of Western and Eastern design philosophy. The one handed grip with a basket guard was undoubtedly Western in design, but the blade still resembled the traditional Katana blade of ancient Japan.

This Type 32 Ko is in VERY FINE, arsenal refurbished condition. The blade is full length and retains much of the refurbished arsenal polish, with only some minor dulling. The reverse ricasso is marked with the very early production serial number 2641 and the matching number appears on the reverse scabbard drag. The hilt of the saber has been arsenal refinished, and retains about 95%+ of its gloss black paint finish. During the refurbishment process, the leather finger loop was removed, the hole in the guard was plugged, and then field flush “ all prior to the refinishing of the guard and grip. The forward bottom of the basket shaped guard is marked with a variety of Japanese kanji and characters that I cannot translate. The checkered wood grip is in fine condition, with sharp checkering throughout and only a couple of minor bumps and dings. The spring-loaded scabbard latch on the reverse of the hilt is in place and functions perfectly. The latch engages the reinforced throat catch on the scabbard. The scabbard is in very good condition and retains about 90%+ of its arsenal refinished gloss black paint. The drag shows a single small inspection mark on its obverse and the matching serial number 2641 on the reverse. The scabbard exhibits some minor flaking and wear to the finish, as well as some small, scattered patches of light oxidation. The single mounting ring is in place on the scabbard and is in fine condition. The obverse of the scabbard shows a single, minor ding about 7 ““ from the drag.

Overall this is a really fine example a Japanese Type 32 Ko Cavalry Saber. These sabers saw use through the end of World War II, especially in China, where cavalry operated extensively, particularly during the first years of the war. The sword is very attractive and would be a very nice addition to a collection of Japanese World War II military arms, at a very nice price.