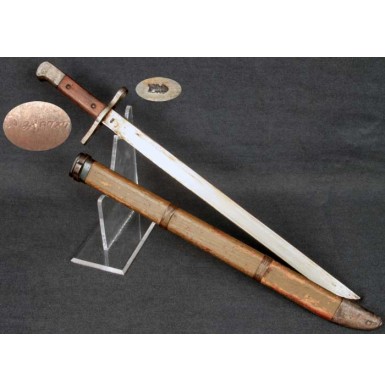 This is a VERY FINE condition example of a Japanese Type 30 Bayonet manufactured by the Matsushita Kinzoku KK Arsenal under Kokura Arsenal supervision. This maker is more commonly known to collectors as National Denki. Their symbol was a fletched arrow with a large M in the middle. Most of the bayonets will be found with the both the Matsushita symbol and the Kokura Arsenal stacked cannonballs symbol on the ricasso. Later production bayonets only have the Arrow-M mark, without the Kokura mark. Matsushita was the second largest of the sub-arsenal to operate under Kokura supervision, and made a wide array of Type 30 bayonet variants. This particular variant is a late war production Type 30, commonly referred to by collectors as a “Last Ditch” bayonet. The bayonet has a straight cross guard without a hooked quillion, an unfullered blade, straight slab grips secured by rivets and a flat birds head pommel. According to Japanese bayonet researcher and author Ray LaBar, this would mostly likely be classified as an LB-115, Variant P bayonet in his identification system. The bayonet appears to have the marks of an 89th Series bayonet and the serial number 16737 stamped on the pommel cap falls into that series. However, LaBar notes that these bayonets were blued, and this one has a bright blade that does not appear to have ever been blued. The series marks and serial number on the pommel cap appear to be re-stamped over other numbers, so it is quite possible that this was a re-work of an earlier bayonet. LaBar does list another oddball, bright blade variant Type 30 (LB-108) in the National Denki section of the book and notes that the fact that the blade is bright, even though it was manufactured in a series of blued blade bayonets. We may never know for sure exactly why the occasional non-conforming Type 30 bayonet pops up from time to time.

As previously noted, the bayonet is in VERY FINE condition. The blade is bright and unfullered, with no indication of ever having been blued. The Arrow-M Matsushita mark on the blade is very deep, making the M somewhat vague. The serial number and series marks on the pommel cap appear to have been re-struck or double struck. The blade is in about perfect condition, with the original factory edge and no indication of ever having been sharpened. The original cross-grain polishing marks are visible at the ricasso, with the length of the blade is polished towards the tip. The blade is bright and covered with old dried grease or Cosmoline, which should be a simple matter to clean off, should the new owner so desire. The grease appears to have helped keep the bayonet in a near perfect state of preservation. The straight cross guard and pommel cap show the typical rough machine marks of late war Japanese industrial production, and do not appear to have ever been blued either. Both the guard and the pommel have a lightly oxidized, brownish patina over the original dull gray metal. The original bayonet locking catch is in place and functions perfectly. The two-piece, slab wood grips are in VERY FINE condition and are secured by a pair of round rivets.They are solid and complete with no breaks, cracks, chips or repairs. The wood panels show only the lightest minor handling marks and dings. The bayonet is accompanied by its original Matsushita produced wooden bayonet scabbard, which rates about VERY FINE condition overall. The scabbard features conform exactly to the wooden scabbards being manufactured at Matsushita during the 88th & 89th series. The scabbard retains its original and correct large metal drag, which retains about 10%-20% of its original blued finish, mixed with a mottled plum brown and gray patina. The scabbard body retains both of the thick wire wraps around it, and the wire remains secure, although the wraps can be slid up and down on the scabbard with a little effort. The original blued metal throat is in place on the scabbard. The throat retains about 80% of its original bright blued finish, with some fading and some light scattered patches of oxidation present. The scabbard retains about 80%+ of its original olive drab paint, with the majority of the loss confined to the front of the scabbard, and most of that along the edges. The scabbard shows numerous bumps, dings and minor surface mars, but is free of breaks, cracks or repairs. There is a minor seam separation along the rear edge, right below the throat that is about 1” long. However, it appears stable and in no way affects the displayability of this high condition late war, wooden scabbard.

Overall this is a really wonderful condition example of a late war production, “Last Ditch” Japanese Type 30 bayonet by Matsushita (National Denki). The bayonet has an outstanding blade and appears to be a scarce variant that was never blued. The wooden scabbard is correct and nearly as fine as one could hope to find, retaining the large majority of its original painted finish. High condition, late war, last ditch bayonets like this are getting harder and harder to find and this is a really great one that will be a fantastic addition to your collection of World War II Japanese militaria or bayonets.