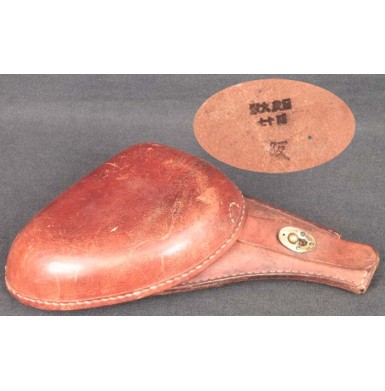 This is a FINE condition example of the Japanese military holster designed for issue and use with the Type 26 Revolver. The Type 26 was adopted in 1893 and was Japan’s first handgun which was designed and produced exclusively in Japan. The designation is derived from the fact that 1893 was the 26th year of the Meiji Era. The revolver was a top-break double action design that borrowed heavily from the Austrian Rast-Gasser revolvers. IT was chambered for the rather anemic Japanese 9x23 revolver cartridge, a cartridge that never saw use in any other firearm. Although the majority of the slightly less than 60,000 revolvers produced were manufactured prior to the end of 1925, the revolvers remained in service through the end of World War II. The revolvers were issued with a leather, clamshell style holster that had an interior pocket with a covering flap that contained 18 cartridge loops for spare ammunition. A narrow leather pouch on the leading edge of the holster was included to carry the cleaning rod issued with the revolver. The holster had a single, wide belt loop on the rear and a pair of oval rings for attachment to a separately issued shoulder sling. The early production holsters used brass rings while later holsters used pot metal or black lacquered white metal rings. A scarce late war variant was also produced of rubberized canvas with leather fittings and a leather flap hinge. Type 26 revolvers and their holsters are rather scarce, when their production is compared to the more commonly encountered Japanese handguns of the World War II era. The Type 14 “Nambu” was produced in quantities of around 279,000 and the Type 94 pistol was produced in a total quantity of about 71,000.

This very nice example of an early production Japanese Type 26 Revolver Holster is in about FINE condition. The leather has a lovely medium tan color to it and retains most of the original finish, with only some light scuffing and minor wear from actual use. The inside flap of the holster is clearly ink stamped with Japanese characters that tell where the holster was made, but unfortunately I don’t read Japanese! All of the holster’s of the original stitching is in place and remains tight and secure. Even the toe plug is in place and in excellent condition. The interior spare ammunition pouch is in place, in fine shape and retains all of the cartridge loops. The oval shaped original brass sling suspension rings are in place on the rear of the holster and have some lovely green age verdigris present on them. The leather clamshell hinge is in fine condition and shows only the most minor wear. The original oval brass latch plate is in place on the closure strap, but it is slightly bent from use and is missing one of the small brass pins that secures it to the strap. The original closure stud is present in the holster as well.

Overall this is a really crisp example of a scarce Japanese World War II era military holster. These days, relatively common Type 14 Nambu holsters in this condition command prices around $300 and up. This is a much rarer holster, in great condition to display with your Type 26 revolver, and priced about the same as a decent Nambu holster. This would be a difficult holster to upgrade from and would be a great addition to your collection of WWII era Japanese militaria.