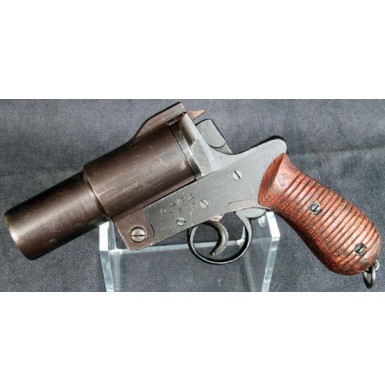 This is an EXCELLENT condition example of a relatively rare Imperial Japanese Army TYPE 10 Signal Pistol. The Type 10 flare pistol was adopted by the Japanese Army in 1921, which was the 10 year of the Taisho dynasty “ thus the designation as “Type 10”. It has a lock work based on the Type 26 revolver, and the grip frame and lines of the pistol due resemble the Type 26 in some respects. The gun fires a 35mm flare, and like most flare pistols uses a break open design to load and empty the gun. According to Japanese pistol researcher and author James D Brown, approximately 8,300 of these pistols were produced between 1921 and the end of the war. They were produced at the Tokyo Arsenal for the first few years of production (1921 to about 1935), at which time production was moved to the second factory at the Kokura Arsenal. Kokura produced about 5,600 of the signal pistols at this location between early 1935 and about November of 1944, with production reaching roughly serial number 7000. At this time production was moved to the Kasuga factory at Kokura Arsenal, and the final 1,300 pistols were assembled between November 1944 and the end of the war.

This is one of the very late war Type 10 Signal Pistols produced at the Kasuga factory of the Kokura Arsenal. It bears the serial number 7546 on the left side of the frame, underneath the Kokura Arsenal symbol and the kanji which reads “Ten Year Type”. Those are the only markings on the gun. The pistol retains about 98%+ of its original, roughly applied late war blackened finish. There are a couple of minor patches of light surface oxidation starting to appear on the right side of the frame, but this can be easily treated with a small amount of oil and some light cleaning. The final finishing of the metal and the finish are nearly identical to the metal work and finish found on Showa 20 dated Type 14 “Nambu” pistols “ the result of late war shortcuts and rushed production. The action of the pistol functions flawlessly. The barrel release works exactly as it should, and locks positively back into position. The double-action trigger and hammer function perfectly as well. The original 2-piece beech wood grips are in about EXCELLENT condition as well. They also show the same rough finish and workmanship found in the rest of the pistol. The grips are deeply grooved with 17 grooves and show only minor bumps, dings and handling marks “ no breaks cracks or repairs. The gun also retains the original lanyard ring in the butt of the pistol.

Overall this is simply an excellent condition example of a scarce Imperial Japanese military signal pistol. With only 8,300 pistols produced over its 24-year production life (versus 279,000 Type 14 “Nambu’s), these pistols were produced at the rate of about 1 for every 33 Type 14 Nambu pistols! This is one of the last 1,300 pistols made and was turned out at the very end of the war, most likely somewhere between November of 1944 and the spring of 1945. Any serious Imperial Japanese collector needs one of these unique pieces of militaria in their collection, and it would be very difficult to upgrade the condition of this flare pistol.

This item is not classified as a firearm by the BATFE and requires no licenses or background check to own or posses. However, some localities restrict the ownership and transfer of signal pistols. It is the responsibility of the purchaser to check state and local ordinances to establish the legality of their possession of this piece of militaria.