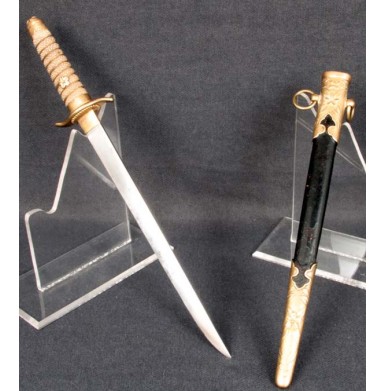 This is a really lovely example of the Japanese Imperial Naval Officer’s Dagger, as authorized in 1883 (Meiji 16). Although adopted some 59 years before the Japanese attack on Pearl Harbor, these daggers remained in use through the end of World War II. The Japanese military in the modern era required their officer’s to purchase their own uniforms, equipment and personal weapons, just as nearly every major military force in the world did. As such, even though standardized regulations were in place for every conceivable item an officer might need, variations did exist “ especially within the realm of edged weapons like swords and dirks. This lovely 1883 Japanese Imperial Naval Officer’s Dagger is in FINE overall condition. The blade is a simple, unfullered affair with a single edge and curved tip. The blade measures 9 15/16” in length and is .70” wide at the widest point, tapering towards the tip. The overall length of the dagger is approximately 14 7/16”. The ricasso has a .60” long gilt brass Habaki, and the blade has no visible Hamon. The re-curved brass Tsuba is gilded, as are all of the mounts. The mounts are decorated with a delicate stippled pattern, and the pommel cap shows a single 5 petal cherry blossom with additional leaves, stippling and decorative lines. The brass mounts show some wear to their gold gilt finish, but are very attractive and have a mellow golden tone to them. The hilt is just under 4 ““ in length and is wrapped in white ray skin, just as most Imperial Japanese Naval officers swords are. The ray skin is secured with 10 wraps of double strand gilt brass wire, all of which remains in tact, with only a couple of strands that are slightly loose. He grip retains both gilt brass Menuki, one on either side “ a simple five petal cherry blossom of the same pattern as found on the pommel cap. The ray skin grip covering is in fine, tight condition, but does show a single age split that runs the length of the hilt, on the bottom of the grip. The split is relatively minor and the wrap remains secure. It does not materially affect the display of this lovely naval dirk. The blade of the dagger is mostly bright, and appears to be plated (as are the blades of most Japanese naval daggers). The blade shows only some very small, scattered patches of minor age staining and some very light scattered peppering, but it free of pitting or significant wear. The Saya is in FINE condition as well and is of leather covered wood with gilt brass mountings. The leather covering shows some minor finish loss and wear and some light flaking along the seam at the rear of the scabbard. The stitching along the rear seam of the scabbard remains in good and tight condition. The gilt brass mounts are free of any dings or dents. The upper mount contains the fully functional, push button release that secures the dagger in the scabbard, as well as a pair of suspension rings. Each side of the upper mount is decorated by a large, five petal cherry blossom in the center, on a stippled background and highlighted by four additional leaves that radiate from the blossom, four additional buds above the cherry blossom and additional leaves below. The lower mount is decorated with a variation on the same theme, with the central cherry blossom and leaves on a stippled background, accented by additional leaves and buds above and below.

Overall this is a really attractive example of a World War II era Japanese Naval Officer’s Dagger, in lovely and complete condition. The dagger shows real world use and carry, but no abuse. It would be a wonderful addition to any World War II Japanese military or edged weapons collection, as it has lots of eye appeal and has absolutely no issues to apologize for.