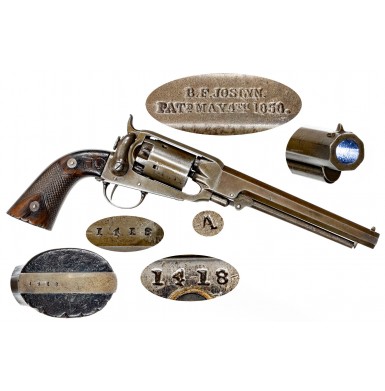 This is one of the more rarely encountered of US made percussion revolvers used during the American Civil War. The Joslyn Army revolver was a 44-caliber, five-shot, side-hammer, single action percussion revolver. The revolvers were blued with color casehardened hammers and loading levers and checkered two-piece walnut grips. Only about 3,000 Joslyn revolvers were manufactured, approximately 500 “First Models” and approximately 2,500 “Second Models”. This is one of the mid-production “Second Model” Revolvers, with the serial number 1418. The 1st Model guns and the very end of the production run of 2nd Model guns had an iron butt cap on the bottom of the grips. This feature was not present on the majority of the production run of the guns.

The revolver was based upon US Patent #20,160, which was issued to Benjamin F Joslyn on May 4, 1858. With the coming of the Civil War and the US Ordnance Department finding itself woefully short of military style percussion revolvers, the US Government placed an order with Bruff Brothers of New York (Joslyn’s sales agent) for 225 revolvers. This order was placed in November or December of 1861. Over the next few months the government ordered an additional 875 revolvers, bringing official US military purchases to 1,100 revolvers, which were delivered at the rather exorbitant price of $22.50 each! It appears that the initial order of 225 revolvers was delivered to the Navy Department, and some of the additional revolvers were also delivered to them. These naval guns are very scarce, and when encountered have full US military martial markings, inspectors’ marks and often a small anchor mark on the bottom barrel flat, hidden by the loading lever. This latter mark was a post-Civil War naval inspection mark. A handful of Joslyn’s have also been encountered with USN marks on the bottom of the butt strap or butt cap. The majority of the estimated 3,000 revolver production run was offered for sale on the commercial market but many of these still appear to have found their way onto Civil War battlefields as the result of additional government commercial purchases and individual state purchases.

Joslyn Army revolvers were issued to the 16th Illinois, 3rd & 7th Iowa, 7th Kansas, 1st Missouri and 5th & 6th Ohio volunteer cavalry units. This indicates that many more than the 1,100 officially purchased revolvers (of which at least 225 went to the Navy) ended up in military service. This theory is further supported by the fact that an early order for Joslyn revolvers had been placed with the William Freeman Company of New York. Freeman has operated as both an agent for Joslyn and had also contracted to produce the revolvers and Joslyn’s patent carbines at their Worcester, MA factory. However, Freeman was unable to fulfill this order or manufacture the guns in a timely fashion. As a result, Joslyn cancelled their contract to have Freeman produce any guns and the 1862 Holt-Owens Commission, which investigated US governments arms contracts that had been let early in the war, nullified the Freeman contract for Joslyn revolvers. The commission also recommended that any additional Joslyn revolvers that were to be acquired be purchased on the open market, at a price not to exceed $15.00 each. The guns that were procured on the open market were not marked with US inspector marks or cartouches. Only those guns acquired by official government contract were inspected. As a result, martially marked Joslyn revolvers are extremely scarce.

The 5th & 6th Ohio Volunteer cavalry used their Joslyn revolvers at the Battle of Shiloh (April 6-7, 1862), where the field reports were not positive. In fact, the report of Lt. Charles Murray of the 5th Ohio Cavalry, Company I read in part:

“We are in possession of but 28 pistols (Joslyn) and they are long since condemned as wholly unfit for service. They are a spurious weapon, made out of cast iron, and one half of the time will neither cock nor revolve….”

As a result of this, and similar reports that condemned the pistols as less than serviceable, most of the US military purchased Joslyn revolvers were removed from active service by the end of 1862 or beginning of 1863 and were subsequently held in reserve at US arsenals until the end of the war.

The US Government began disposing of Joslyn revolvers in October of 1865, and a total of 393 revolvers were sold off over the next 36 years. The guns initially sold for between $3.65 and $4.00 each, and by the time the last guns in inventory were sold on June 19, 1901, they were selling for a mere $.16 each. These guns were sold from the Watervliet, Allegheny, Columbus, Washington & New York Arsenals.

The gun remains in relatively crisp condition and all of the metal edges are sharp, without any rounding or significant wear. The triggerguard retains some traces of blued finish but no other blue is present on the gun. The finish on these revolvers was prone to flaking,  so finding a Joslyn Army with any substantial amount of finish is extremely difficult. The balance of the revolver shows a moderately oxidized brownish gray patina on the barrel, cylinder and frame, all of which match very nicely. As previously noted, the metal is fairly crisp with clear markings and good edges. The metal is almost entirely smooth, with only some lightly scattered patches of light pinpricking, some lightly scattered minor pitting and some scattered surface oxidation. The most notable areas of light pitting are around the muzzle area, on the frame forward of the cylinder chambers and in the recesses of the rear of the cylinder. The pistol has a GOOD+ bore that retains strong rifling. The bore is moderately oxidized and shows scattered light pitting along its length, with some patches of more moderate pitting here and there. The gun is mechanically FINE and times, indexes, and locks up exactly as it should. As noted in the field reports, these revolvers often had mechanical issues and that is true of many surviving examples. The trouble likely relates to the cylinder arbor pin that is threaded into the rear of the frame. The defect of the design means that the same types of mechanical issues are also common on Colt Root pattern revolvers and long arms, which use the same style of side mounted hammer with an indexed cylinder arbor pin that enters through the rear of the cylinder. Those mechanical issues were what caused the pistols to develop such a bad reputation for reliability during the Civil War. As such, it is very nice, and somewhat uncommon, to find a Joslyn revolver that is mechanically functional without any of the issues most of the guns appeared to have. The round disc at the rear of the cylinder pin does show some wear and impact marks, but as noted, the pistol still functions flawlessly. The loading lever works as it should as well, and snaps firmly into place under the barrel when not in use. The original dovetailed blade front sight is in place on the top of the barrel, near the muzzle. The two-piece checkered walnut grips rate about VERY GOOD as well. They are solid and complete with no breaks or repairs. There are six notches carved at an angle into the lower edge of the right grip, the meaning of which is unknown. If you want to attribute the notches to “kills” feel free, but I think that is unlikely. However, it might represent how many skirmishes or battles the carrier of the gun was in; his way of keeping track of how many times he “saw the elephant”. A couple of the notches have small associated chips, and the edges of these notches have worn smooth due to years of handling and use. What appears to be the initials BO, cut in an awkward, geometric fashion, are present on the top of the right grip where it joins the frame. Otherwise, the coarse checkering remains fairly sharp, but the grips do show light to moderate wear and handling marks, with some minor bumps and dings that are typical of real world use.

While more Joslyn revolvers were produced than many of the other US Civil War era secondary martial percussion revolvers like the Butterfield or some Allen & Wheelock revolver patterns, they seem to be encountered for sale much more rarely. Over the last several years I have had the opportunity to offer several Butterfield revolvers for sale on this site, but this is only the fifth Joslyn that I have had the pleasure to offer for sale. To put it simply, the guns are truly scarce and seem to only occasionally be found for sale. This one is 100% complete, correct and period. More importantly, it is mechanically functional with a very crisp action, which is a rarely encountered feature. This is an attractive and unmolested gun that has no remarkable issues and nothing to apologize for. If you have been looking for an opportunity to add one of these scarce secondary martial US revolvers to your collection, here is a wonderfully complete example that is solid displays very well. It is a gun that deserves to be added to an advanced Civil War revolver collection and is very fairly priced considering its overall scarcity.