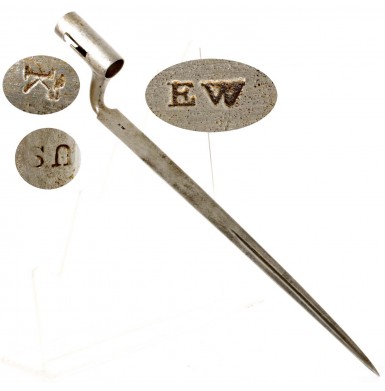 This is a VERY GOOD+ condition example of a scarce US 1798 Contract Socket Bayonet manufactured by the Whitney Arms Company of New Haven, CT. Eli Whitney’s arms company was to receive the largest contract to manufacture the new US Model 1795 (Charleville Pattern) flintlock musket in 1798 to augment output from the National Armory at Springfield, and the yet to be operational Harpers Ferry Arsenal. More than two dozen contractors were engaged in the manufacture of the US 1798 Contract muskets, but none would produce anywhere near the 10,000 stands of arms that Whitney would deliver. As with all US musket contracts of the era, the guns were all delivered as “stands of arms”, which included a socket bayonet. While many of the 1798 contract bayonets that were delivered by the various makers were unmarked, at least some delivered by Whitney were marked with various cryptic marks, including a variation of the “Venus” symbol (often used to represent the female gender). A number of other strange and cryptic blade marks are also attributed to Whitney as they all share similar physical characteristics and use a single capital letter forward of the mortise as the mating mark for the bayonets.

This Whitney Arms 1798 Contract Bayonet is in about VERY GOOD+ condition and is one of the 10,000 bayonets that Whitney delivered with US M1795 pattern muskets between 1801 and 1809. The features of the bayonet suggest it is a very early delivery. Many of these guns and bayonets were subsequently issued to the various states under the Militia Act of 1808, and most saw service during the course of the War of 1812. The face of this bayonet’s blade is marked with the large initials E W. While on the surface this is not enough to identify the bayonet as one made by Eli Whitney, when taken in conjunction with the Whitney style single letter mark forward of the mortise cut, we can be relatively confident that Whitney delivered this bayonet. In this case, the letter is a K.

The bayonet is approximately 16 15/16” in overall length with a 14” blade that is 1.07” wide at the ricasso and which has a rudimentary face flute that measures 6 1/2” in length. The tip is the early pattern narrow point, typical of bayonets from the latter part of the 18thcentury and common until the general adoption of the prow point tip on most US socket bayonets circa 1816. The socket measures 2 5/8” and is cut for a top stud with a simple two-step, Z-shaped mortise with a 1” muzzle to stud distance. The bayonet has a .864” muzzle diameter and the rear of the mortise is unbridged. The face of the shank is nominally flat and is stamped US upside down. The dimensions and configuration of the bayonet nominally conform to other 1798 contract Whitney bayonets, with a couple of minor variations that suggest early production. Most of the Whitney 1798 bayonets are bridged, with no face flute and do not usually have the flattened shank with US mark. These features suggest very early delivery to me, likely among the first that Whitney completed circa 1800.

The bayonet is in VERY GOOD+ condition. The bayonet is shows light to moderately scattered pinprick pitting, primarily on the socket and neck of the bayonet, with less present on the blade. The bayonet appears to have been chemically cleaned at some point in time, and now has a dull gray patina over most of the metal, with some scattered flecks of oxidized discoloration. The bayonet shows some forging flaws, which is not uncommon for US bayonets from this period. The bayonet also shows a wonderful, wavy weld line near the ricasso where the iron socket and shank were joined to the steel blade. This is evident by the slightly different coloration in the metal between the iron and the steel. The socket does show some minor dinging around the face, leaving is very slightly out of perfect round. This is not uncommon as the period of non-interchangeable, friction-fit bayonets often required the soldier to dent the socket to make it fit his musket more tightly.

Overall this is a very nice example of a very early production, known-maker US marked, US contract socket bayonet from the earliest years of 19thcentury with a very interesting blade mark. These bayonets saw significant use during the War of 1812 and have survived in very small numbers. If you have a War of 1812 era Whitney M1798 Contract Musket this would be a wonderful addition to the display of your musket. It would also be an appropriate addition to any collection of early American socket bayonets or arms from War of 1812.