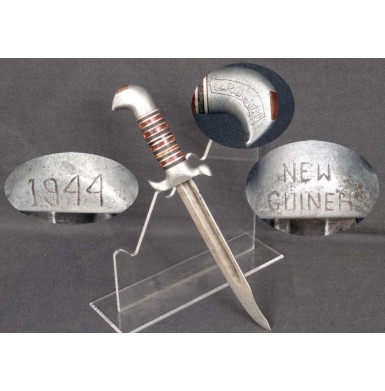 This is a great example of the classic World War II era Theater Knife, a fighting knife produced in the combat theater of operations, often by machinists on board naval ships. The knife was produced in the Pacific Theater, and the owner was kind enough identify himself, the location the knife was used and the date of its use! The reverse pommel cap of the knife is clearly marked in electric pencil: Ed Richard. The obverse guard is marked in the same way: 1944 and on the reverse: NEW GUINEA. The knife is a wonderful example of a theater made combat knife. The blade is 7 15/16” and appears to have been re-purposed from a bayonet blade. The blade has a shallow, Bowie knife style clip point and a fuller that is unstopped and runs into the ricasso of the blade. This unstopped fuller indicates that the blade of the knife was made from another edged weapon with a longer blade. The dramatic crossguard and hooked pommel cap are both made from aluminum. The grip is made up of alternating Plexiglas washers, leather washers and aluminum spacers. The Plexiglas has been colored red, amber and a deep magenta, with an additional piece of amber colored Plexiglas set into the pommel cap. The knife has a very attractive look to it that is equally wicked looking. Like so many WWII theater knives, this weapon is as much an expression of the maker’s art as it is a lethal fighting knife. The knife is in very good overall condition. The blade has a medium dull gray patina, mixed with scattered patches of darker age discoloration and minor pinpricking and peppering. The hilt washers all show some wear, nicks and scratches from use, but no abuse. Overall this is really cool, identified Pacific Theater fighting knife, from the often forgotten New Guinea campaign of late 1943 through 1944. The knife is identified and is worthy of additional research to try to pin point the serviceman who carried. This would be a great addition any WWII edged weapons collection. Provenance: Ex Roger Ballard Collection. A 1997 dated collection card, with Roger’s drawn image of the knife and his notes regarding it will accompany the knife to the new owner.