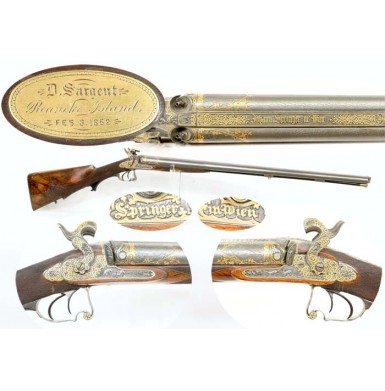 It is the history of a given weapon that captures the passion of most antique arms collectors. Some collectors are fixated upon condition, others upon exquisite quality and still others on those arms that are identified to a specific person of some historical import, but in the end, it is the item’s historical associations that seem to have the greatest and most universal appeal to the collector. While it is possible that all of these qualities can be found in a single item, it rare that a historical important firearm with iron clad identification, is found that is both of exquisite quality and in fantastic condition. The percussion shotgun offered here is perfect example of just such an item, one that offers something for any serious antique arms collector. The gun is identified, was made by one of the most famous continental gun makers of the 19th century, is an exhibition grade piece, remains in fantastic condition and has wonderful Civil War association related to the Battle of Roanoke Island.

First the gun itself. This firearm represents the pinnacle of mid-19th century European excess, as the gun is covered in relief engraving with gold damascene highlights and features an exquisite raised carved and checkered stock. The shotgun was made by Johann Springer of Vienna. Springer was a Hungarian engraver who had grown up in Leutschach in Upper Hungary and relocated to Vienna during the late 1830s. There he met and married Catherine Nowotny. Catherine was the sister of leading Vienna gunsmith Mathias Nowotny. Nowotny had established his business in Vienna in 1836 and had been so successful that opened a second location in Vienna (probably a retail outlet) rather quickly. Springer apparently knew and worked with Nowotny for some fifteen years, establishing a strong relationship with the family. In 1856 Mathias Nowotny committed suicide, and the following year his wife sold the company to Johann Springer. Now the company was in the hands of the late Nowotny’s sister and brother-in-law. Springer wasted no time in changing the company name and spent the next two decades concentrating on producing some of the finest grade sporting arms in the world. To quote from the website of Joh. Springer s Erben (yes the company is still in business today), “he specialized in the production of luxury hunting weapons and won because of the quality of his products many medals at exhibitions. Kaiser Franz Josef was one of his regular customers and awarded him in 1872 the “k. u. k Chamber Title”, which is a higher award than the “Hoflieferantentitel”. The grammar is somewhat stilted due to the translation to English. Springer would be universally celebrated for his extremely high-quality sporting arms. Upon Springer’s death in 1875, his sons took over the company, and continued to grow it and expand it. The list of their customers during the late 19th and early 20th century reads like a “who’s who” of European royalty, including the Kaiser Franz Josef, the ill-fated Archduke Franz Ferdinand and Archduchess Maria Theresa, and such families as the Liechtensteins, Esterházys, Coburgs and Orlowskis. As previously noted the company remains in business today as the premier sporting firearms and hunting company in Austria, with four Vienna locations, offering a wide variety of arms and services, including firearms auctions.

The gun has a gold plated oval escutcheon plate applied to the reverse of the butt, in the middle of the check rest. The plate reads in three lines:

The shotgun is a double-barreled, side lock gun with 28” barrels and .708” caliber bores, which means it is nominally 13-bore, or roughly equivalent the modern 12-gauge “modified” choke. The gun is 45 ““ in overall length, with 14 ““ length of pull and a 3 ““ drop of comb. The gun is marked clearly on both the locks and the barrel rib as the work of Johann Springer. The right-hand lock is simply marked Springer under the hammer with the left-hand lock marked in Wien in the same location. The barrel is marked in Gothic script Johann Springer in Wien in letters that are about 1/3” tall, with entire legend measuring about 3” in length. All of the lettering is highlighted with gold damascene, and a substantial amount of additional gold decoration is present, with decorative gold geometric and floral designs present on the hammers, locks, barrel rib, breech plug tang, buttplate tang and triggerguard. The locks, hammers, breeches and furniture and also profusely engraved with chiseled relief hunting scenes and classical motifs. The hammer necks feature winged cherubs, while the hammer noses depict lion’s heads. The right lock shows two dogs in search of a rabbit in its warren, while the left lock shows two dogs in pursuit of two grouse. The tails of both locks depict the face of a wizened man. The breeches feature engraved platinum blow-outs and both barrels are engraved with a pair of large (about 1 ““ tall), caped musketeer type characters with capes and large feathered hats, surrounded by gold damascene foliate decorations. The center rib depicts a whippet or greyhound over the breeches and intertwined gold damascene geometric patterns. The breech plug tang is relief carved with a dog having taken down a buck near the breech and a depiction of Apollo with his bow and quiver, with both the quiver, arrows and sling highlighted in gold. Additional gold damascened geometric patterns are found along the length of the tang as well. The top of the buttplate is engraved with a scene of a buck and doe in the forest, with more gold damascened patterns, and the triggerguard depicts and hunter and his dog in the field. The barrels and rib are matted by a swirling Damascus style pattern, with the barrels appearing to have been left in the white, while the double triggers are fire blued. The stock is made of two pieces of highly figured walnut, with the buttstock joined to the wrist with a large, single dovetail joint that measures slightly more than 1 ““ wide at the notch and appears to original and intentional. It seems that Springer wanted to use an even more figured piece of wood for the butt, and jointed the stock to the rear of the wrist allowing slightly plainer wood to be used where the figure would be concealed by the checkering, allowing the intense swirling grain to be visible at the rear of the butt. The stock is attached to the barrel via a single key in the checkered forend, which is tipped with a horn forend cap. The two key escutcheons are gold plated and show simple decorative engraving while the key and escutcheon screws are fire blued. The buttstock features a raised check rest and relief carved decorations on both sides that feature swirling foliate motifs. The toe of the butt, behind the pistol-grip style horn triggerguard extension, is carved with an owl motif. A fire blued sling sporting style sling swivel ring is present in the toe of the stock and the upper ring is located on the middle barrel ramrod pipe. The brass tipped ebony ramrod is secured by two metal thimbles and the horn entry pipe. The rod has a removable cap at the that reveals a ball puller.

The shotgun is in EXCELLENT overall condition and truly a majestic example of old-world gunmaking artistry. I can say without a doubt that this is the finest and fanciest shotgun with Civil War association extant. The gun is truly an exhibition grade piece of work. The markings, engraving and decorations all remain crisp and sharp throughout. The locks remain mechanically EXCELLENT, remaining crisp and fully functional. The locks and barrels have a medium pewter-gray patina with the faux Damascus patterning remains clear and crisp. Both of the bores are brilliant and smooth, with only some lightly scattered minor oxidation present. The original ramrod remains with the gun and is in FINE condition. The stock remains in about VERY FINE to NEAR EXCELLENT free of any breaks, cracks or repairs. I am firmly convinced the dovetailed joint between the buttstock and the wrist is intentional, allowing the use of the highly figured wood in the butt, without allowing that figure and grain to potentially weaken the wrist. The dovetailed joint and the fact that the wrist checkering is over the joint, only reinforces this opinion. The carving and checkering remains very crisp and sharp throughout, with only some minor wear to the checking at the wrist and forend from light handling and use. The stock does show some scattered minor bumps, dings, light mars and surface scrapes, but nothing more than would be expected from a gun that is more than 150 years old and has been passed down from generation to generation in one family since its capture.

Overall, this is a simply wonderful, mid-19th century, exhibition-grade, high-art quality Austrian shotgun with a wonderful identification and Civil War association. While it seems unlikely that this gun was carried by a Confederate in the defense of Roanoke Island (although many shotguns were), it was likely taken as a trophy from a wealthy planter or landowner. Daniel Sargent thought enough of it to make sure it came home to Boston, and his family thought enough of the gun to hand it down and preserve it over the generations for some 155 years after the date on the plaque. It is worth noting that after an exhausting study of Civil War period shotguns, which will be documented in our new book, due to be available in the very near future, this is the only Austrian made gun we have encountered. This is a stunning piece of the gun maker’s art and Civil War history, tied up with a great identification to an officer who served though most of the war, and was wounded twice in the service of his country. This is a gun that deserves to be a centerpiece of an advanced Civil War collection, particularly one centered on identified or captured items, or one that revolves around Burnside’s North Carolina campaign. For many collectors, the opportunity to own a “fresh piece”, directly from the family is an elusive goal that is difficult to accomplish. This gun has never been offered for retail sale, and had descended through the family until this year.