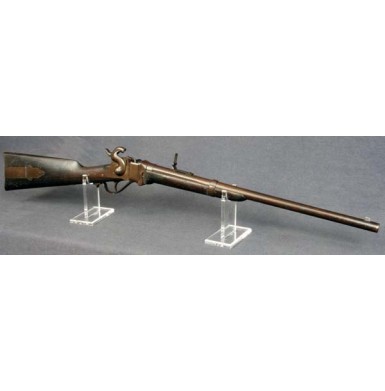 The Sharps Carbine, in both the New Model 1859 and New Model 1863 configurations, was the most used carbine to see service with the US Cavalry during the American Civil War. From their initial delivery to the Ordnance Department in September 1861, through the end of the war, the Sharps Rifle Manufacturing Company delivered a total of 77,330 carbines. Throughout the war, the Sharps outnumbered the other carbines in the field by as many as about 6 to 1. According to December 1862 Ordnance Department returns, there were already 13,645 Sharps in the field, with the Smith Carbine being the next most issued carbine in the field at 1,922. September 1863 Ordnance Department returns showed similar numbers with 20,378 Sharps in the field, with the next most issued carbine in the field at that time being the Burnside, of which 8,179 were in service. While the Spencer Carbine was eventually issued in huge numbers during the last 18 months of the war, no carbine ever superseded the Sharps for overall numbers, quality and durability. Field reports regarding the service of the carbine during the war were almost entirely positive, with very few negative reports noted. During the course of the war, the two primary variations of the carbine to see service were the New Model 1859 and New Model 1863. Both were single-shot, .52 caliber carbines with 22” barrels. They featured a “fall block” breech loading action and the automated Lawrence Pellet Priming System, which could also be deactivated, allowing the carbine to use standard percussion caps for ignition as well. The NM-1859 and the early NM-1863 carbines had an iron, case hardened patchbox in the buttstock, a feature that was eliminated on the last 40,000 carbines delivered, in compliance with changes in the August 1863 contract.

The Sharps carbine offered here is a really lovely, untouched New Model 1863 carbine. The gun is one of the early NM-1863’s that has the patchbox in the buttstock. The gun is serial numbered 76,233 on the tang of the action and on the bottom of the barrel (under the forend). The lock plate is clearly marked in two locations. On the upper portion of the lockplate, behind the hammer is marked in two horizontal lines: R.S. LAWRENCE PAT. / APRIL 12th, 1858. The lock plate is also marked in two horizontal lines on the rear portion, behind the hammer: C. SHARPS’ / OCT. 5th 1852. The left side of the receiver is marked in two lines: SHARPS PAT / SEPT 12th 1848. The top of the barrel is marked NEW MODEL 1863 in front of the breech and SHARPS’ RIFLE / MANUFG. CO. / HARTFORD CONN. in front of the rear site. The rear site base is marked in three horizontal lines: R.S. LAWRENCE / PATENTED / FEB. 15th 1859. The most interesting mark on the carbine is the one that ties it to a specific soldier. The left side of the buttstock, opposite the patchbox, is stamped with a single gang stamp: S. S. CROMPTON. The stamp appears to have been double stuck, or the stamp stuttered, as the last few letters are on top of each other, and slightly misaligned. A search of numerous databases for Civil War soldiers revealed only one possible identity for S.S. Crompton “ Samuel S Crompton of the 9th Illinois Cavalry. Crompton was a truly interesting person. He was born in England and his occupation on his original muster sheet was listed as Scholar. He lived in Moline, Rock Island County, Illinois and on June 9, 1862, at 20 years of age he enlisted in company F of the 69th Illinois Infantry. The 69th IL INF was a 90-day volunteer unit spent their entire service as guards at the notorious US prison camp in Chicago, IL - Camp Douglas. Crompton’s company descriptive book entry describes him as 5” 6 ““ tall, with dark hair, brown eyes and a light complexion. Crompton was mustered out of the 69th IL on October 6, 1862. A little over two years later, Crompton enlisted in Company B of the 9th Illinois Cavalry. At this time he was listed as a resident of Cook County, Chicago and was 22 years old. The company descriptive books notes that he is 5” 6 ““ tall (he lost ““ over the two year period) and had brown hair and eyes and a light complexion. This time, his occupation is listed as Blacksmith. He joined the 9th IL CAV on February 25, 1865 and was mustered out on October 31, 1865 in Selma, AL. The 9th IL Cavalry was a heavily engaged unit that spent their entire service in the Western Theater, mostly in the Department of Tennessee. They spent a good part of the war operating against Confederate cavalry in Western Tennessee and Northern Mississippi. At the end of 1864 they participated in the Tennessee Campaign against Hood and saw service along the Duck River near Columbia, the Battle of Franklin, and the Battle of Nashville. They subsequently took part in the pursuit of Hood back into Alabama. During their service, the 9th IL was armed with a variety of carbines and Ordnance Returns showed them only 27 M-1855 Pistol Carbines and 80 Hall Carbines at the end of 1862. By September of 1863 they had 61 Hall’s, 1 Burnside, 1 Smith and 194 Sharps carbines. In the fall of 1864 they were armed with 259 Spencer Carbines, 3 Hall’s and 79 Sharps carbines. In May of 1865, their complement of carbines were 333 Burnsides and 88 Sharps, with 103 Gallager’s noted as having been “turned in”. There are no good serial number records for the guns that saw service with the 9th Illinois Cavalry, but there is the strong likelihood that this Sharps carbine with Crompton’s name on it was in possession of the regiment as early as the fall of 1863. So, even though Crompton was not present at the tumultuous battles of Franklin and Nashville, this carbine probably was. After the war, Crompton returned to his earlier home town in Moline, IL and pursued a career with the Moline Scale Company. In fact, Crompton applied for a US patent (#521,230) on July 25, 1893 for “certain new and useful improvements in Hooper-Scales”. The patent was granted on June 12, 1894. Crompton was an active member of GAR Post #312 “ R.H. Graham Post in Moline, IL and died on September 10, 1936 at 94 years old. Copies of information about Crompton, including his pension applications, company descriptive book entries, information about the 69th IL Infantry & 9th IL Cavalry are all include with the carbine, as well as a copy of his patent application and patent drawings. Interestingly, Crompton is listed on the patent drawings as S. S. CROMPTON - just like the gang stamp on the buttstock of the Sharps.

This Sharps New Model 1863 Carbine is in lovely, completely untouched ATTIC FINE condition. The barrel has a really attractive smooth plum-brown patina, mixed with some strong traces of original blued finish in the protected areas and nooks & crannies. The metal is mostly smooth, with only some light scattered patches of minor peppering and pinpricking - mostly around the muzzle. The case hardened frame and furniture has a matching, thick chocolate patina, over some light traces of case coloring. All of the metal remains crisp and sharp with fine edges and clear markings. The carbine is 100% complete and correct and retains the original Lawrence patent rear site, original front site with brass blade and the original sling bar and ring. The action works perfectly and still functions crisply and correctly on all positions. The original Lawrence patent pellet primer system is in place and appears to be complete and functional. The bore of the carbine is in about GOOD condition. It is dark and somewhat dirty with strong rifling and some scattered moderate pitting “ mostly near the breech end of the carbine. A stiff scrubbing with a brass brush would likely improve the condition of the bore quite a bit. The stock is in VERY GOOD condition and has a dark, un-cleaned tone to it. The edges remain crisp and sharp, but the stock and forend do show a significant number of bumps, dings and dents from use and saddle ring carry. There is the shadow of the original inspectors cartouche on left side of the buttstock, just above the sling bar. The cartouche is light due to the rubbing and motion of the sling ring and snap ring from which the carbine was suspended when Crompton was riding. The stock is solid and without any breaks, cracks or repairs.

Attractive, completely untouched and un-messed with Civil War issued Sharp’s carbines are rarely encountered these days. This one remains 100% complete and correct and has none of the post-Civil War alterations that are so frequently encountered on Sharps carbines. It is nearly certain that Crompton took this gun home with him at the end of the war, which has allowed it to survive all of these years without alteration or modification. The fact that this is a carbine that can be concretely identified to a specific trooper in a specific regiment makes it that much rarer and more interestingly. Crompton himself was a very interesting character, and further research into his wartime and post war career could prove fruitful. This is one of those great guns with fantastic eye appeal that needs no apologies or explanations and has wonderful specific soldier and unit provenance. It will be a fabulous addition to your Civil War collection, whether you collect ID’d items, Cavalry items, carbines or Civil War era weapons.