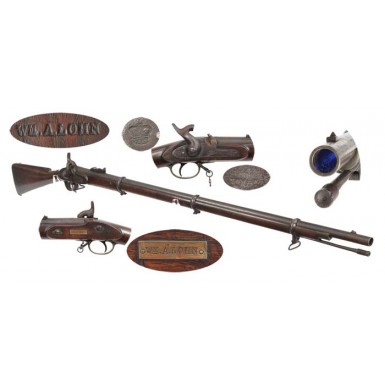 For collectors of American Civil War artifacts, there is no more precious discovery than an item that can be linked directly to a specific soldier who served during that bloody conflict. We often opine, “if only this gun (or sword, or canteen, etc.) could talk, what stories it could telL’”. This item is one of those iconic pieces of American Civil War history, which might be able to tell interesting tales about the soldier who carried it during the closing days of the war, and then thought enough of it to bring it home and display it (possibly in a G.A.R. Hall) with his name upon it.

This wonderful, untouched example of a British P-1853 Enfield Rifle Musket is marked with the name of man who carried it at one time; William A Lohn. The musket is stamped WM. A. LOHN on the obverse buttstock and is marked in exactly the same way on a small brass plaque affixed to the stock flat, opposite the lock. Only one soldier named William A Lohn served during the American Civil War. Based upon his service and war records I have to assume that this gun was issued to him near the very end of the war, just prior to his being mustered out of service. He then took it home and marked it with his name, and displayed it either in his home or the local Grand Army of the Republic hall. Lohn’s service was extensive and period documents indicate that he carried the burdens of his service through his entire post war life.

William A. Lohn was born on August 4, 1839 in Cincinnati, OH. According to his company descriptive book entry he was 5” 7 3/4” in height (exactly “average” for the typical Civil War soldier), had a “light” complexion, had brown hair and hazel eyes. He was a farmer from Hamilton County (Cincinnati), OH. Remarks about Lohn in the descriptive book entry noted that “(the) Little finger of each hand deformed,”. Lohn was obviously overcome with patriotic fervor, as he enlisted on April 20, 1861, only 8 days after the firing on Fort Sumter. He joined Company K of the 6th Ohio Volunteer Infantry at Camp Dennison, Ohio, enlisting for 90 days of service. On June 19th, 1861 the 6th Ohio Infantry was reorganized and mustered again as a 3-year regiment and Lohn reenlisted as a private in Company K. Lohn saw a significant amount of service during the war. He and the 6th Ohio spent the fall of 1861 operating against Robert E Lee in West Virginia and participated in the Cheat Mountain Campaign. The regiment was transferred to the Western Theater in November of 1861 and was stationed in Louisville until it joined Grant’s middle Tennessee campaign in February of 1862. The regiment joined Grant at the battle of Fort Donelson on February 14, 1862 and was there for the surrender of the fort on February 16. From Donelson Grant’s army marched on Nashville, and on February 25, the 6th Ohio was the first regiment to enter the city. Over the next few months, the regiment and Lohn participated in every major campaign and battle to take place in the Western Theater during 1862, including the battles of Shiloh, Corinth, Perryville and Stones River (Murfreesboro). After the battle of Stones River the regiment stayed in the Murfreesboro area for about 6 months, and participated the Tullahoma Campaign during the late spring and early summer of 1863, which culminated in campaign along the Tennessee / Georgia state line and the battle of Chickamauga. At Chickamauga, on September 19, 1863, William A Lohn was captured. The 6th Ohio remained in service in the South-East Tennessee and North Georgia area until June of 1864, when they were transferred to Camp Dennison, OH for mustering out on June 23, 1864, at the expiration of their 3-year enlistments. However, for William Lohn the war was far from over. He was sent from Georgia to Virginia, and on September 29, 1863 he was confined at Belle Isle in Richmond. In December of 1863 he was transferred to Danville, VA, and subsequently sent south the to the most notorious of the Confederate prison camps, Andersonville. Lohn was probably among the first of the prisoners to be confined there in February of 1864, and remained confined there until sometime late that year, when he was sent to Savannah, GA. Lohn was paroled on November 20, 1864 in Savannah. He was sent to Camp Parole, MD, arriving on December 4, 1864 and was immediately admitted to “Hospital Div. No 1”. On December 18, 1864 he received a 30 day furlough, and was finally mustered out of service on January 23, 1865, nearly 18 months after his regiment had conclude their term of service. Lohn married Elizabeth Marqua on October 11, 1866, but his records indicate that they did not have any children. Following the war Lohn applied numerous times for invalid pensions and benefits, but was repeatedly denied. His complaints included that he suffered from rheumatism that he contracted while at Belle Isle in December of 1863, as well as “scurvy and piles (together with lack of proper food) greatly affecting his nerves and kidneys”, the result of his incarceration at Andersonville in 1864. Eventually Lohn was eventually recommended for a 6/18 partial pension in 1891 of $6 per month. In 1913 he was given a full pension of $25 per month (later $30 per month). After the war Lohn worked at a tinsmith in Cincinnati, despite his multiple ailments lived to the ripe old age of 76, dying on November 24, 1915. It can only be presumed that he was issued this Enfield in late 1864 prior to his being mustered out in 1865, or that he purchased it after the war as a commemorative item. Obviously he cared about it enough to label it clearly as his own, and held the gun in high regard.

The P-1853 Enfield Rifle Musket attributed to William A Lohn is in about ATTIC FINE and untouched condition. Like so many P-1853 Enfields that saw service during the war, the gun bears no marks to indicate its Civil War use, other then Lohn name in the stock and the affixed name plate. The lock of the musket is marked TOWER / 1862 forward of the hammer and bears the typical British Crown, with no VR mark under it, at the tail of the lockplate. The lock shows the typical Birmingham double boarder line engraving around the outside edge of the lock plate and the hammer has the typical Birmingham “feathers”. The inside of the lock shows no contractor names or initials, with the only markings being the assembly mating mark | \ / on the edge of the lock. These same mating marks appear on the bottom of the barrel, on the bottom of the breech plug, on the necks of the lock and breech screws and in the ramrod channel of the stock. The lock has a thick brown patina, and shows moderate pinpricking and light pitting on the surface, as does the hammer. The lock is mechanically excellent and functions perfectly on all positions. The barrel of the musket has a deep, untouched chocolate brown patina, as do the balance of the iron parts. The breech and bolster area show moderate pinpricking and some light pitting, with the balance of the barrel (forward of the rear sight) shows less roughness, and scattered light to moderate pinpricking and peppering over the deeply oxidized brown patina. The standard post-1813 Birmingham commercial provisional proof, definitive proof and view marks are present on the upper left edge of the breech, along with a pair of 25 gauge marks, indicating the gun is .577 caliber. The marks are somewhat weak due to wear and surface oxidation. The bottom of the barrel is marked with the same three file slash | \ / mating marks as the edge of the lock. These same marks appear on the bottom of the breech plug as well. The bottom of the barrel shows only a pair of reversed R marks, a capital letter B and the name ROSE’s. Rose Brothers of Birmingham was one of the premier barrel makers during the mid-19th century and producing high quality “patent twist” gun barrels from 1860 to 1870. The bore of the musket is in about GOOD condition. It is very dark and dirty, but it retains strong visible rifling. As would be expected on a commercial arm, intended for export, there are no British military inspection or ownership marks present. The gun retains its complete, original and fully functional rear sight, as well as its front sight/bayonet lug. The musket retains both of its original sling swivels and its original, full-length ramrod, which has good threads at the end. All three barrel bands even retain their original screw protecting washers. A period snap cap (cone protector) is attached to the rear sling swivel with the correct iron split ring and teardrop shaped brass chain. The snap cap retains its iron base but is missing the leather pads. The cap may be a later addition, as the sling swivel is installed on the gun backwards. The cap does, however, have a patina and age that match the musket perfectly. All of the brass furniture has a very attractive, dark brownish-green patina, which is totally untouched and uncleaned. The stock is in truly FINE condition and is very crisp throughout with extremely sharp lines and fine wood to metal fit. The stock is solid, full length and complete, and is free of any breaks or repairs. The stock shows only the usual variety of scattered bumps, dings and mars from use and service in the field. As noted earlier, the obverse buttstock is stamped WM. A. LOHN, and the same mark appears on an old, period applied brass plaque on the stock flat, opposite the lock.

Overall this is a very crisp, completely original and totally untouched example of Pattern 1853 Enfield Rifle Musket that saw real use during the American Civil War, and was subsequently owned and displayed by William A Lohn of the 6th Ohio Volunteer Infantry. The gun is mechanically fine, 100% complete, has great eye appeal and displays wonderfully. The gun is accompanied by a folder of William Lohn’s records, photocopied at from the National Archives, as well as a copy of the original catalog, that featured the gun for sale in May of 1998. The gun has been in an advanced Northern Virginia collection ever since. Rarely do such wonderful condition, un-messed with guns with great history and provenance come to market. This one is right as rain and will be a great addition to you Civil War arms collection.