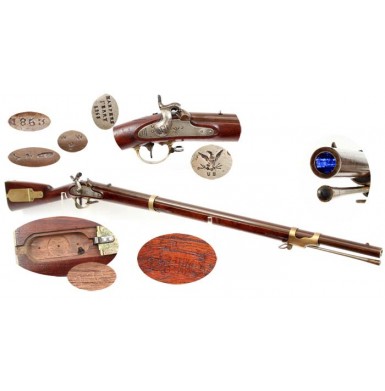 This is a very crisp, fine condition example of the US M-1841 Mississippi Rifle as produced at the National Armory at Harpers Ferry. During the production run at Harpers Ferry, from 1844 to 1855, the armory produced 25,296 of the rifles, while an additional 66,500 were produced by a variety of contractors for the US government. The M-1841 was the first percussion ignition rifle adopted by the US military. It was also the first large-scale production long arm to be manufactured with interchangeable parts by a National Armory. While the M-1819 Hall breech loading flintlock rifle (as produced at the rifle works at Harper’s Ferry) was also an interchangeable parts weapon, it was produced in limited quantities and was not intended for the level of widespread issue that the M-1841 was destined for. As originally designed, the M-1841 was a .54 caliber rifle intended to fire a patched round ball and was equipped with a fixed rear sight. As was typical of most rifles during that time, it had no provision to accept a bayonet. Under Secretary of War Jefferson Davis (who served in that capacity under President Franklin Pierce from 1853-1857) the national armories were tasked with the job of modernizing US military small arms and munitions. Davis had direct personal experience with the effectiveness of the M-1841 rifle from his fighting experience during the Mexican American War, and felt that arming all of the US military with rifled arms would put the army at a distinct advantage over those armies that still relied upon smoothbore muskets. During the mid-1850’s Harper’s Ferry started experimenting with a variety of modifications to the M-1841 rifle to make it a more modern and useful weapon. During these experimentations, a variety of adjustable rear sights and bayonet lug configurations were tried, in an attempt to find the best possible improvements for the rifle. These series of experiments, with the additional modification of adding the Maynard automatic tape priming system, eventually resulted in what would be the replacement for the M-1841 rifle; the M-1855 rifle. In addition to alterations to Mississippi rifles performed at Harpers Ferry, many of the rifles in state arsenals (both north and south) were altered during the early days of the American Civil War. The alterations typically involved adapting the gun to accept a bayonet, and often included the addition of improved rear sights and re-boring the guns to .58 caliber. As a result, it is quite difficult these days to find an unaltered, original configuration .54 caliber US M-1841 Mississippi Rifle, especially one from Harpers Ferry.

Overall this is really a wonderful and crisp example of a scarce Harper’s Ferry US M-1841 Mississippi Rifle in its original .54 caliber arsenal condition. The gun is the best of both worlds, showing light use and remaining in a very high state of preservation, but is not actually mint and unissued. The barrel has enough original finish and wonderful patina that when combined with the very sharp stock, and crisp markings allows it to display like a $7,5000 rifle. The gun is a 100% correct Harpers Ferry produced rifle. This is an important distinction, as Harpers Ferry locks are often found in M-1841 rifles made by other makers, in an attempt to increase the desirability and value of an otherwise less valuable contractor made gun. If you have been looking for an unaltered, .54 caliber Harpers Ferry Mississippi that saw some use but still looks fantastic, this would be a great gun to add to your collection.