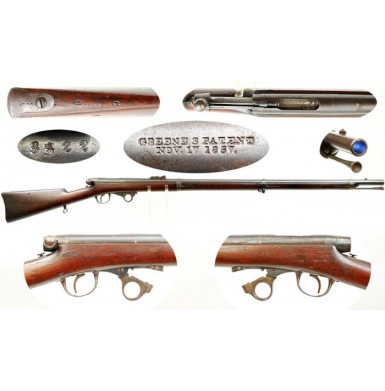 The Green Rifle offered here is in NEAR VERY GOOD condition. The gun is 100% complete, correct and original, and may be one of the Massachusetts militia rifles to have seen service at Antietam. The rifle is devoid of any US inspection marks or cartouches. The only external marking is on the receiver tang, which is clearly marked in two lines: GREENE’s PATENT / NOV. 17, 1857. The only other factory marking noted is the serial number 3522, which is stamped into the bottom of the bolt, and can only be seen by partially removing the bolt from the receiver and rotating it. The rifle is stamped with the letter C four times along the comb of the stock, three times in the wood and one on the tang of the buttplate. The letter is about ““ tall, but I don’t know if it is some sort of a rack marking (Company C”) or some sort of odd condemnation mark. The rifle is mechanically very good, with the bolt operating correctly, and the under hammer and trigger functioning as they should. The metal of the rifle retains about 60%+ of its original blued finish, which had faded and flaked, leaving patches of brilliant niter blue in some areas, more muted and dulled blue in others, and areas of dull pewter gray with bluish toned patina. There are also flecks and patches of minor surface oxidation scattered within the blued finish. The buttplate is devoid of any finish and has a medium gray patina with scattered brown oxidation and some light surface scale over much of its surfaces. The metal of the rifle barrel is mostly smooth, but the rifle has been subject not only to some use but poor storage. The result is that there are some scattered areas of pinpricking present here and there, but worse there are a handful of patches of much more moderate to severe pitting present in several areas. There is a thumb sized patch of pitting on the top of the barrel, forward of the breech, behind the rear sight. The rear sight shows moderate pitting as well, and there is a final patch of severe pitting on the rear barrel band. Some of these spots of surface corrosion have been lightly cleaned, disturbing the patina slightly and leaving the dull pewter base color of the metal exposed. The case hardened, ring shaped under hammer retains traces of mottled color, most of which has faded, oxidized and dulled, blending with a smoky tobacco colored patina. Some light surface oxidation within the ring of the hammer and presence of pinpricking around the cone suggest the rifle saw actual use with mercuric percussion caps during the period of its service life, and not some hundred years later. As the majority of Greene rifles were sold from US Ordnance stores in unfired condition at the turn of the century, it seems likely that this rifle saw its use during the Civil War. The oval bore remains extremely “smooth”, as it should and is quite bright with only some scattered pinpricking visible along its length. The rifle retains its original rear sight that is quite similar to that found on the P-1853 Enfield rifle musket, and which is graduated to 800 yards. The rifle retains its original, full-length trumpet shaped cleaning rod with a cupped head, which could double as a ramrod if necessary. The rod retains fine, usable threads on the reverse end. The rifle also retains both original sling swivels. The stock of the rifle remains in about NEAR FINE condition and shows no signs of being sanded. The stock is solid and full length with no breaks, cracks or repairs noted. There are some moderate scrapes and mars along the sides of the stock at the receiver, but they seem to be marks from handling, use and storage. Otherwise, the stock shows only the usual assortment of minor bumps, dings and bruises typical of the handling, use and storage of a 150-year-old military rifle, including some minor splintering of the wood along the cleaning rod channel, further indication that this rifle actually saw some use.

Overall, this is a solid, relatively crisp and totally complete example of the scarce Greene Bolt Action Rifle. These guns are far from common and represents a number of “firsts’ for the US military, with some of the features never being seen in a US military firearm again. The rifle was the first bolt-action firearm purchased by the US military and was the only under hammer percussion rifle to see military service. It was also the only oval bore firearm to see US military service. While the conservative ordnance department of the mid-1860s probably did not understand the virtues of this futuristic firearm, it did pave the way for other bolt-action rifles that would eventually be adopted. For any US marital arms collector this would be a nice addition to a collection, but for the serious US martial bolt-action rifle collector this is the first gun that has to be in a collection that spans the 80+ years from Civil War through World War II. This is an attractive and complete example complete with original bayonet that will be a fine addition to your collection.