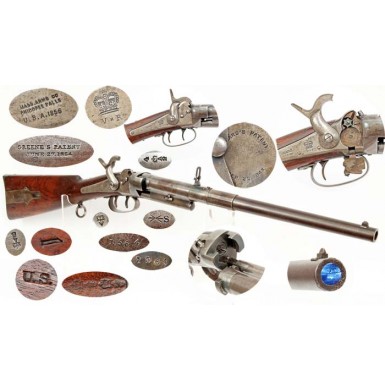 In each case, these unidentified arms might be surplus Greene’s, with the 50 carbines sold by Howland & Aspinwall at $22.00 each being very likely culprits. The number of arms nearly coincides with the 40 guns missing from British stores by January of 1862, and the price clearly indicates a breechloading weapon of high quality. While we may never know for sure, it does appear possible that at least a handful of the British Greene’s may have been repatriated to the US to see service in the American Civil War.

This British Contract Greene Carbine is one of the very scarce and desirable examples that bears a US surcharge on it. The gun is in about VERY GOOD+ to NEAR FINE condition and is 100% complete, correct and original in every way. The lock of the gun is clearly marked in three vertical lines behind the hammer: MASS. ARMS CO / CHICOPEE FALLS / U.S.A. 1856. The two line gang die that stamped the top two lines skipped when it was stuck, as the mark has a “shadowed” look to it, due to the die stuttering. The lock is also clearly marked with a (BRITISH CROWN) / V x R. The tape primer door is marked in two arced lines: MAYNARD’s PATENT / CER. SEP. 22 . 1845. The tang of the carbine is crisply marked in two lines: GREENE’s PATENT / JUNE 27, 1854. The bottom of flat of the 16-sided grasping portion of the barrel is marked with the serial number 1564, and this same number appears on the bottom of one of the frame lugs and on one of the barrel locking lugs. A myriad of British inspection marks appear in the metal of the carbine, on the top of the barrel, top of the receiver, patch box, etc. These include both (CROWN) / A / 2 and (CROWN) / A / 5 marks. The “crown” indicating British military inspectors, the “A” indicating “America” and the number being that of the individual inspector. A small “Crowned Broad Arrow” appears on the top flat of the 16-sided grasping portion of the barrel, directly in front of the rear sight, and behind the triggerguard. A (CROWN) / A / 6 mark is present in the wood behind the triggerguard tang. The left side of the breech is marked with the British military sold out of service surplus mark of two opposed Broad Arrows and a single capital S. The obverse buttstock bears a British War Department storekeepers mark, a single 1, just forward of the patchbox. On a rifle musket this would indicate "1st Quality", in other words, a machine made, interchangeable parts gun. I would guess it has the same meaning in this case. The most interesting mark is the simple US surcharge of U.S. stamped at the upper right hand corner of the reverse buttstock, near the buttplate. This same mark is known on a handful of Greene carbines and suggests US military service, after the gun was sold from British stores, likely during 1861. As noted, the carbine remains in VERY GOOD+ to NEAR FINE condition. The cased hardened lock retains about 30% original faded case coloring with some darker mottling present. The lock remains crisp and tight and is fully functional in all respects, with the Maynard system working perfectly. Breechloading action and locking mechanism of the carbine function perfectly as well and the carbine opens smoothly and locks up securely as it should. The receiver of the carbine retains about 10%-20% of its original blued finish that has faded and blended with a smoky gray patina. The blue is more vivid and more evident in the protected areas of the receiver and inside the action of the carbine. The receiver is mostly smooth and free of any pitting, with only some scattered patches of light surface oxidation present. The barrel of the carbine has a thick, brown, oxidized patina, which is untouched and uncleaned. The barrel shows light pitting around the 16-sided gripping area and scattered along the entire barrel. This is mixed with evenly distributed pinpricking over the entire barrel. The bore of the carbine is in about VERY GOOD+ to NEAR FINE condition. The bore is mostly bright, with crisp rifling throughout. The bore shows only lightly scattered pitting along its length, with a couple of more moderate patches of roughness nearer to the muzzle. The carbine retains both its original long-range rear sight and the original font sight. The carbine also retains its original carbine sling ring, mounted behind the triggerguard tang. The ring remains secure and swivels freely as it should. The wood of the carbine’s buttstock rates about VERY GOOD+ to NEAR FINE. It is crisply marked with a U.S. on the reverse, near the upper rear edge of the butt. The wood is solid and complete without any breaks, cracks or repairs. As would be expected, the wood shows numerous bumps, dings and minor mars from handling, use and storage over the years.

Overall this is a really attractive example of a very scarce British Contract Greene Carbine. These guns are rarely found for sale and according to researchers very few even survived the mid-19th century. With most estimates at only 200 of the 2,000 manufactured having been sold as complete arms, it is understandable why they are very difficult to find some 150 years later. While it seems improbable that more than a handful ever left British service to see use during the Civil War, it is clearly possible that a few did. The small number of extant examples with US surcharges, combined with the known fact that at least 40 were missing from stores by January 1 of 1862, makes for some intriguing possibilities. When combined with some of the less than detailed listings of foreign arms purchases, it is possible to see how a few ended up in US service without ever being listed as purchased. What makes this even more likely is the fact that according to researchers Whisker, Yantz & Hartzler (see US Civil War Carbines), Company C of the 6th Ohio Volunteer Cavalry was armed exclusively with Greene patent carbines, according to their February 1, 1863 ordnance returns. As it is unlikely that they would have been carrying the American made Greene’s discounted by the US Ordnance Department in 1858, they almost certainly were armed with the British made variants. No matter what the explanation, at least a few Greene carbines do appear to have made it back to American soil. These are really rare guns that deserve a place in an advanced 19th century small arms and carbine collection, and this one displays nicely and has that coveted “US’ mark.