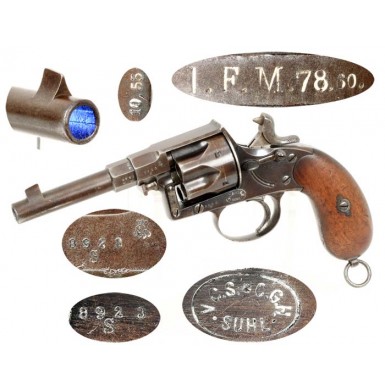 This is a VERY GOOD+ to NEAR FINE condition example of a fairly scarce Suhl Consortium produced German M83 Ordnance Revolver, better known as the M-1883 Reichsrevolver. It is interesting that until the adoption of the M-1879 Reichsrevolver (the direct ancestor to the M-1883), the standard military handgun used by the Prussian and other German kingdoms was a single shot, percussion muzzleloader! Even though the Prussian military had been using incredibly advanced bolt action Dreyse needle rifles since their introduction in 1841, they felt little need to improve the arms of their cavalry, instead relying upon the lance and saber as their primary weapons, rather than the repeating cartridge handguns that had become a standard weapon for most western cavalry regiments by the early 1870s. With the exception of some Colt M-1851 “Navy” percussion revolvers purchased by the Kriegsmarine (German Navy), the late 1870s found the state of Germanic military handguns firmly entrenched in the 1840s! The M-1879 Reichsrevolver was developed as the standard military handgun for use by the militaries of the four German kingdoms: Prussia, Bavaria, Saxony and Württemberg. It was 6-shot, single action revolver with a 7 1/8” round barrel with a small octagonal section at the frame juncture, and a reinforcing ring at the muzzle (often referred to as a “cannon” barrel), with a rust browned finish. The revolver incorporated a safety lever on the left side of the frame and had a lanyard ring in the butt cap. The revolver was chambered for a 10.6x25R centerfire cartridge. The cartridge was loaded with a 262-grain lead bullet of about .44 caliber, propelled by a black powder charge with a muzzle velocity of 700 fps and 288 ft./lbs. of muzzle energy. The 10.6x25R is often compared to the S&W .44 Russian cartridge, which is nearly identical in size and power, and was initially produced by Ludwig Loewe & Company (the predecessor of DWM). The M-1879 was produced by three primary manufacturers. These were Gebr’der Mauser & Cie, who supplied the kingdoms of Bavaria and Württemberg, Franz V. Dreyse who supplied the kingdoms of Prussia and Bavaria, and the Suhl consortium of arms makers consisting of Spangenberg & Sauer, V.C Schilling & Cie and C.G. Haenel & Cie, who supplied Prussia, Bavaria and Saxony. The revolver remained in production from its adoption in 1879 through 1883, with a total of 84,931 being produced. In 1883 a more refined variant of the revolver was adopted as the M-1883 Reichsrevolver. The new gun retained the same basic design, with a single action mechanism and still chambered for the 10.6mm x 25R cartridge. The most obvious change was the shortening of the barrel to 4 ““ and the elimination of the cannon swell at the muzzle. The grip frame was also redesigned, making it somewhat more rounded and increasing the grip angle relationship to the muzzle, and eliminating the buttcap on the bottom of the grip. Interestingly, the most deficient portion of the M79 design, the lack of an extraction or ejection system, was not addressed in the M83. Most M83 revolvers were blued rather than browned, and in the case of commercially produced guns for the private purchase of officers, the finish can sometimes be very impressive, rivaling that of Colt revolvers of the same period. A total of 132,656 M83 Ordnance Revolver were produced between 1883 and 1896. The large majority of the guns were manufactured by the Royal Prussian Armory at Erfurt, where some 95,000 of the guns (about 72%) of the guns were produced over 13-year period. Of those revolvers, the majority (92,500) were destined for issue to the Prussian military and the remaining 2,500 were issued to the state of Württemberg. Three contractors also produced the guns, the Suhl Consortium (V.C. Schilling and C.G. Haenel of Suhl), Waffenfabrik von Dreyse of SŒMMERDA and Gebr’der Mauser & Company of Oberndorf. The Suhl Consortium manufactured 22,296 (about 17%), Dreyse manufactured 13,860 (about 10%) and Mauser manufactured 1,500 (about 1%) of the M83 Ordnance revolvers produced. Of the guns produced by the Suhl consortium, 10,000 were delivered to the state of Prussia, 7,296 were delivered to the state of Bavaria and 5,000 were delivered to the state of Saxony. The Dreyse guns were delivered to the state of Prussia (13,000) and Bavaria (860) and the Mauser guns were all delivered to the state of Württemberg. These large and well-made revolvers remained the primary issue handgun to German state military forces (along with the earlier M79 Ordnance Revolver) until 1908, when they were superseded by the Parabellum-Pistole 1908, better known simply as “The Luger”. Even though the Luger replaced the M79 and M83 revolvers, these guns remained in use through the World War I era, mostly with second line and reserve troops. Unit marked revolvers are encountered from time to time, allowing the identification of the unit to which the gun was issued. Although considered obsolete by World War II, some M79 and M83 Reichsrevolvers are reported to have seen use by the French resistance during Nazi occupation. The Germans even pulled some Reichsrevolvers out of mothballs at the end of World War II, during the fight for Berlin. This revolver bears a First World War unit marking. The backstrap is marked 1. F.M. 78. 60., which means 1 Munitionskolonne, Staffelstab 78 Waffe Nr. 60 or 1st Field (Heavy) Munitions Column, 78 Division Train Command, weapons #60. In other words the revolver was issued to the 1st field artillery ammunition column, 78th train (sort of like a company within a regiment), gun number 60. The proof marks of a (CROWN) / AR (entwined) indicate Saxony military use, and since the gun was made by the SUHL consortium, we know it is one of only 5,000 manufactured for the use of the Saxon military.

This M83 Ordnance Revolver aka Reichsrevolver is in VERY GOOD+ to NEAR FINE overall condition and was produced by the famous Suhl consortium of V.C. Schilling and C.G. Haenel of Suhl, Prussia. The left side of the frame, below the cylinder is crisply and clearly marked in a two-line, oval cartouche: V.C.S. & C.G.H. / SUHL. Just to the left of the makers mark is the serial number of the revolver, 8923 / S. The upper left side of the frame barrel juncture and the left side of the barrel are also stamped with the serial number 8923 / S, and the left upper flat of the small octagon portion of the barrel is marked with the caliber 10,55. The rear face of the cylinder is numbered 8923 as well. All of the small parts of the revolver are numbered to the gun with the last two digits, 23, including screw heads. Numerous small proof and inspection marks are scattered throughout the revolver. These include the Saxon inspection initials AR, which are intertwined and surmounted by a crown. This mark appears on the upper left side of the frame, forward of the cylinder, on the rear face of the cylinder and on the butt of the revolver. The cylinder chambers are numbered in the style of 19th century English revolver, with the numbers 1 through 6 stamped between the cylinder flutes. The frame, barrel and cylinder retain about 20%+ of their original blued finish, which has oxidized and faded to a lovely plum brown patina. The metal is mostly smooth, with some evenly scattered light pinpricking and lightly oxidized freckling present on the metal. There are also a few small patches of oxidized surface scale and some minor pitting scattered about the gun, but it is not significant. Most of this is found on the frame and topstrap near the cylinder mouths. The gripstrap (both frontstrap and backstrap) retain no appreciable finish, but have a nicely oxidized and show scattered areas of light pitting as well. The rear of the backstrap is unit marked 1. F. M. 78. 60., the meaning of which is explained above. The original lanyard ring remains in place in the bottom of the butt. The action of the revolver functions perfectly and is mechanically excellent. The revolver times, indexes and locks up tightly and correctly. The safety lever functions correctly, with the up position allowing the revolver to fire, and the down position locking the action and preventing the revolver from being placed on full cock. The bore of the revolver rates about NEAR VERY GOOD. It has a dark, seasoned appearance, but retinas strong rifling. There is some lightly scattered pitting evenly distributed along the length of the bore, as well as a few small areas of more moderate pitting noted in the bore. The two-piece walnut grips rate about VERY GOOD. They are solid and complete without of any breaks, cracks or repairs. However, they do show the expected scattered bumps, dings and handling marks from service and use.

Overall this is a nice, crisp example of a scarce Suhl Consortium produced, Saxon military marked, First World War used M83 Reichsrevolver with unit markings. Less than 17% of all M83 Ordnance Revolvers were produced by the Suhl Consortium and less than 4% of M83 revolvers were produced for the Saxon military, making this a rarely encountered variant of the M83 Reichsrevolver. These large military revolvers are an important part of any German martial handgun collection. As more than one collector has noted, a M83 is the second gun in any chorological collection of modern era German military pistols and realistically belongs right before a P-08 Luger in that collection. As we are now in the middle of the Centennial of the Great War First World War military items are experiencing a surge in collector interest and values. This revolver has a great WWI unit mark to a Saxon heavy artillery munitions train, and will be a great addition to your military handgun collection.