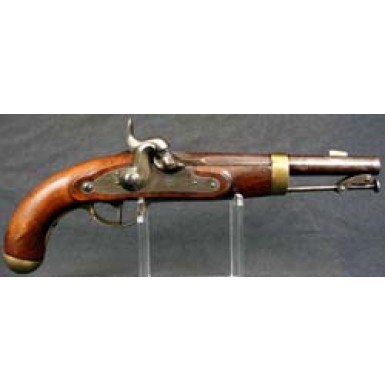 Here is a truly excellent example of the very rare German Federal Naval Pistol that for lack of a better official designation I will refer to as a Model 1849. The gun is a single shot, smooth bore, muzzle loading percussion pistol with a captive rammer. The barrel is 9 ““ long and .60” caliber (15.3 mm) and the gun is 16” in overall length. In many ways it looks like a cross between the US M-1842 pistol and the Prussian “Potsdam” pattern long arms. The gun has the more rounded lock plate and features of the Prussian M-1839 series of long arms, and like the M-1839 & M-1849 guns was produced as a percussion weapon, not a flint alteration like the M-1809 Potsdam muskets. In 1849 The German Confederation ordered 1200 rifles and 100 pistols for the Federal Navy. Several extant examples of the M-1849 German Federal Naval Rifle exist, but I have not ever seen one of these rare naval pistols offered for sale. The gun is very clearly marked on the lock plate with a German Crown / SUHL / V.C.S. / Anchor. The V.C.S. mark is that of Suhl based gunmaker Valentin Christoph Schilling, who was also involved with the manufacture of the confederation’s M-1849 Naval Rifles as part of the S & C consortium. This company, Spangenberg & Consorten was composed of Spangen, Sauer & Sturm, C. G. Haenel and V. C. Schilling. The top of the pistols breech is marked with the Double Headed Eagle, the coat of arms of the German Confederation that existed from 1815-1866, over an Anchor and the same marks are in the wood behind the breech, to the left of the barrel tang. As is typical of Germanic arms, the gun is profusely marked with the proof of the reigning monarch- in this case a Crown / K. This mark is found on the breech, in the stock and on most of the small work of the gun.

The pistol is in excellent overall condition. The lock is very crisp and responsive and works well on both the half cock and full cock positions. The captive rammer assembly is original, complete and works well. The rammer is numbered 15 and this same number in located under the barrel of the gun. The barrel retains about 50% of its original brown finish, with some fading and wear. The only evidence of any real pinpricking or peppering is some light roughness (caused by cap flash) right around the bolster. The balance of the barrel is in nearly new condition. The brass furniture has a lovely tone and a mellow glow; with the typical light wear marks one would expect to see in soft metal. The wood of the stock is in fine to excellent condition as well, with only the most minor bumps and dings present. The stock appears to be beech, the wood most commonly found used for stocks on Suhl produced long arms.

German Federal Naval pistols simply don’t come up for sale very often. Only 100 were manufactured and they are by default exceptionally rare. I doubt that there are any of these pistols of this quality available for sale at all. While I can draw no direct link between these pistols and American Civil War usage, it is interesting to note that there is such a link for the German Federal Naval Rifles. A handful of similarly marked German Federal M-1849 Naval Rifles are known to exist (one of which I have handled) that also bear the marks of Philadelphia gunsmith Andrew Wurfflein and the City of Philadelphia on the breech. While I cannot in any way argue that this pistol was imported for Civil War use, we do know that some of the Naval weapons from the German Federation did see service in the US during the war. This is a truly excellent example of a very rare German Federal Naval Pistol that will look wonderful in any arms collection and would truly be a centerpiece of an arms collection that concentrated on Germanic arms from the mid-19th Century.