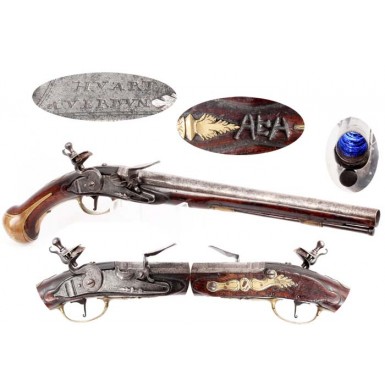 This is a wonderful example of an early 18th century French Cavalry Officers’ Pistol c1740. The pistol is in about FINE overall condition, and is crisply and clearly marked with the maker’s name on the lock plate. The pistol takes the basic form of the French M-1733 Cavalry Pistol, but is of higher grade and has a few other minor differences. The first standardized French military arm had been their infantry musket, which was standardized in 1717 as the M-1717. In 1733 the cavalry pistol was standardized as well. It took the form of a long barreled, large caliber pistol, typical of the first half of the 1700s. The official pattern was about 19 5/8” in overall length with a 12 ¼” octagon to round barrel of about .67 caliber. The pistol had a flat beveled lock had a grooved, stepped tail, and was quite similar to the M-1728 musket lock, which was the standard French infantry arm at the time. The iron pan was facetted, with a simple external bridal, and the cock was of a flat, swan neck design that was not reinforced. The pistol was brass mounted with a simple reinforcement band near the forend tip. The issue pistols often incorporated a short belt hook, similar to those normally associated with sea service pattern pistols. These long barreled pistols remained the standard French cavalry pistol through the early part of the 1760s, when the M-1763 pistol supplanted them. The M-1733 was the standard issue pistol during the course of King George’s War, The War of the Austrian Succession, and the Seven Years War, which was called the French & Indian War in the American colonies.

This French Cavalry Officers’ Pistol c1740 is in lovely condition and shows design elements of both the standard issue M-1733 pistol of the time, as well as the elements of the pistols produced in the two decades prior to the pattern standardization. The pistol is about 22 ¼” in overall length, with a 14 1/16” long, octagon to round barrel that is approximately .65 caliber. This makes the pistol slightly shorter than the earlier pattern guns manufactured c1715-1730, and slightly longer than the M-1733 pattern pistols. The general profile of the barrel is more like the earlier pattern guns, with a squared off tang, double wedding band breech, and flat top rib that extends the majority of the barrel, from the octagon breech area, along the top of the round portion of the barrel. The barrel is secured by pins along the length of the stock, and with a single screw through the breech tang. The lock is very much in the pattern of the M-1733 lock. The lock is 5 ¼” in length, with a curved “banana” profile. The lock is flat and beveled, with a grooved, stepped tail. The rear of the lock terminates in a pronounced “teat”. The lock is clearly engraved in two lines, forward of the hammer, HVART / A VERDVN. The archaic “V” is used for both the letters “V” and “U”, much as the archaic “I” can also be used as a “J”. M. Huart, also spelled Huard or Hvard in some references, worked as a gunsmith in Verdun from about 1730-1750, and produced the pistol during that time frame. This time frame meshes perfectly with the pattern and styling of the pistol. The lock is lightly engraved, with boarder lines and some very light floral motifs. The same floral motifs are extended to the hammer. The integral pan is of iron, and is facetted with a fence. Unlike the M-1733 pistols, the pan is unbridled, which was typical of earlier pattern guns. The trigger has a reversed curl at its end, like the earlier pattern guns, and is not plain like the M-1733. The pistol is mounted in brass and has a bulbous brass butt cap, a decorative 2-screw side plate, a large wrist escutcheon, and a decorative triggerguard. The butt cap, side plate and escutcheon are in the style of the pre-1733 pattern pistols. The pistol has two sheet brass rammer pipes, on about mid way along the barrel length and one at the entry to the stock. The pipes secure a wooden rammer. A simple brass blade front sight is present on the top of the barrel, as few inches from the muzzle. The pistol is stocked to the muzzle and has no forend cap or reinforcing band. The stock has raised carving to the rear of the lock and breech tang, and incised lines along the lower edge of the stock sides, above the rammer pipes. These features are more typical of the pre-1733 pattern, and are higher grade work than would be expected from a standard issue pistol.

The pistol is in about FINE overall condition and appears to be completely correct and original in all respects, with the possible exception of the ramrod, which is probably a period replacement. As noted, the lock is clearly engraved HVART / A VERDVN. The lock has a medium pewter gray color to it with a salt and pepper, lightly oxidized patina. The lock is mostly smooth and has only some lightly scattered pinpricking and peppering scattered over its surface. The lock is fully functional and works well on all positions. The pistol is in its original flint configuration and is not a re-conversion. The cock appears to be completely original, including both the top jaw and screw. The lower portion of the cock neck, just above the main body, shows a small stress crack that is about ¼”. This is clearly visible in the close up photo of the lock. The cock remains solid and strong, but should be handled carefully to avoid breaking it in future. The cock should not be allowed to strike the steel as this may aggravate the crack. The interior of the pan shows strong oxidation and moderate roughness. The touchhole appears unmolested and is well located in the lower middle of the pan. It shows good wear and moderate erosion. The steel shows good age and wear as well and appears to have been refaced (shoed) during the period of use. The barrel has about the same overall appearance and patina as the lock, being a medium pewter-gray with darker patches of oxidized salt and pepper and pinpricking scattered along its entire length. The barrel was probably lightly cleaned sometime in the last few decades and is toning down. The barrel shows some patches of light to moderate pitting scattered along its entire length. The nominally .65 caliber smooth bore is in about FAIR condition at best. It is rough, dark and dirty with moderate to heavy pitting along its entire length, including a few patches of truly deep pitting. What appears to be the original brass blade front sight is in place on the barrel, a few inches from the muzzle. The brass furniture has a nice, mellow ocher patina. The side plate is high quality and decorative, and is quite attractive. The patina of all of the brass furniture matches well. The triggerguard is a higher-grade version of the M-1733 style triggerguard, with the incised lines of the earlier pattern and the general shape of the later pattern. The buttcap has the decorative concentric rings of the pre-1733 pattern furniture. The pistol retains a very old, wooden ramrod with a slightly enlarged head, in the pipes under the stock. The rod is probably not original to the gun, but may be. More than likely it is a period replacement. The rod is 12 ½” in length and has no facility to accept cleaning tools or implements at its end. The pistol stock is in wonderful condition for its age, and does qualify as FINE, considering that is about 275 years old! The stock is full length and solid with no breaks noted. There is a small amount of wood filler present on the lower right portion of the grip, at the juncture with the buttcap. There is also some minor wood loss around most of the pinholes where the pins secure the barrel and pipes. The pin that should be just forward of the lock is missing from the pistol, and that hole is about double its original size. There are a couple of minor wood chips missing from the pistol, the most prominent being a small chip missing from the lower rear of the lock mortise area. This is a very old chip and is worn quite smooth. There is also a tight grain crack that runs from the front edge of the forend cap and runs back into the rammer channel. This appears stable and is not really noticeable from any normal display angle, but is mentioned for exactness. Otherwise, the stock shows only the expected bumps, dings and minor surface mars that would be expected on a military pistol that is more than two centuries old. The wood has a really wonderful smooth, polished patina, the result of being handled for more than two hundred years. The initials AEA are carved into the bottom of the pistol, in front of the triggerguard finial. They are of the period and very nicely carved. The meaning is completely unknown to me.

Overall this is a really fantastic looking and completely original pre-French & Indian War era French cavalry Officers’ Flintlock Pistol. The pistol is maker marked by a known French gunsmith who worked c1730-1750, and remains in really lovely condition. The pistol is in original flint, is mechanically fine and is absolutely gorgeous. If you are a serious collector of early martial pistols, from the first half of the 18th century, this would be wonderful addition to your collection. This gun may well have seen service during the Revolutionary era as well, and would be equally at home in a collection of arms from that era. Every collection of Colonial era arms needs representations of English, French, Dutch/German and American made arms. This would be a great French piece for an advanced collection and is one that you will be very proud to display.