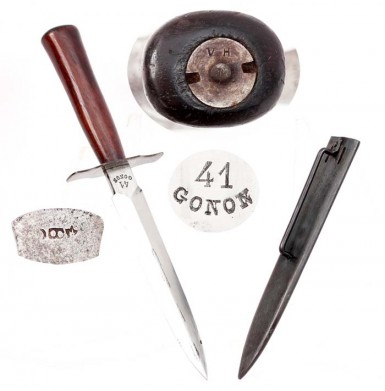 This is an EXCELLENT example of the rather scarce French Couteau Poignard Mle 1916 dit Le Vengeur, literally the “Knife-Dagger Model 1916 known as the Avenger”, complete with its original and correct scabbard. The knives were often referred to by the French as “Avengers’ due to the motto found on some knives: “Le Vengeur de 1870” (“The Avenger of 1870”), a reference to the French seeking revenge for their humiliating loss during the Franco-Prussian War of 1870, which set the stage for World War I in many ways, including the French loss of the Alsace-Lorraine region and the unification of the German Empire under Wilhelm I.

These French M-1916 fighting knives were adopted for use in the trenches of the Western Front during World War I. The knives were simple and robust, with a double-edge, spear point dagger blade and a simple turned wood hilt with a stamped metal cross guard. The knife blades were approximately 6 ““ in length (give or take an 1/8” or so), and were the pattern that was copied on the US M-1918 Mark 1 “brass knuckle” trench knife. The overall length the knives was about 11”. The smooth, turned wooden grip had an oval cross section with a simple palm swell to improve its handling and grip. A simple sheet metal scabbard with a single metal wire belt loop was issued with the knives, the exact same type of scabbard that was issued with the French made “Au Lion” M-1918 Mk1 Trench Knives. The wooden hilt was secured to the tang of the knife with a simple flat spanner nut, which applied pressure to the hilt & cross guard. This system proved somewhat problematic and the hilts often developed cracks along the grain due to the pressure from the spanner nut. As such, later production M-1816 knives had a simple metal ferrule added to the hilt, just behind the cross guard, to reinforce the wooden grip and reduce the chances of cracking. The knives were produced from 1916 through the post-World War I era and were still the standard issue fighting knife for the French Military when the Germans invaded and captured France during World War II. Thousands of the French knives were captured at that time and used as Ersatz fighting knives by the conquering Nazi army. During their production over a dozen makers produced the knives, including GONON, ASTIER-PRODON, PATAUD and S.G.C.O. (Societe Generale Coutellerie et Orfeverie). Many of these cutlers were based in Thiers. Thiers is located in the Puy-de-D’me department in Auvergne, central France, and is famous for their quality cutlers. Thiers was (and still remains) the French equivalent of the Solingen region of Germany in terms of their reputation for quality blades.

This French Couteau Poignard Mle 1916 Knife & Scabbard is in EXCELLENT condition. The knife blade is full length and retains the majority of its original bright finish, including a large amount of its original polish. The blade shows only a few scratches along the blade and some surface scuffs from insertion and removal from the metal scabbard. The knife appears to retain its original factory edge with no signs of being sharpened. There are some minor patches of age discoloration on the blade, mostly scattered at the tip on both sides, and along the median ridge of the obverse blade. The obverse ricasso is clearly marked in two lines: 41 over GONON, which is in an inverted arc. This is the trademark of the firm of Gonon-Chasengue et Fils (Gonon-Chasengue and Son). Gonon was a famous French cutler located in Thiers, who operated from 1896 to 1931. The stamped metal cross guard is stamped on the upper reverse with a (STAR) / B French military acceptance mark. The spanner nut is marked with the inspection letters V H. Both the cross guard and spanner nut shows some light surface oxidation and minor age discoloration. The knife is the early pattern M-1916 with no metal ferrule around the forward portion of the grip. The wooden grip is in about VERY FINE+ to NEAR EXCELELNT condition as well, and is free of any breaks, chips or repairs. The grip remains tight and wiggle free, which is uncommon with these knives, as the grips often loosen up considerably and grips are prone to wobble. The reverse of the grip shows several very minor surface stress cracks that run along the surface grain of the grip. These very cracks, which are barely visible, and are only along the surface grain, are the exact reason why later model knives had the added metal ferrule behind the cross guard. The cracks are so minor as to be nearly unnoticeable and are mentioned for exactness. Again, they are only along the grain on the very surface of the wood. Otherwise, the grip shows only the usual bumps, dings and minor wear marks from use and service. The knife is accompanied by its original sheet metal scabbard, which is in EXCELLENT condition. The scabbards are scarce and often missing from the knives, and when found are rarely in great shape. This one is practically dent free, with the exception of one minor push under the tubular metal belt loop. The scabbard retains about 80%+ of its original blued finish, with the reverse (where the belt mount is) retaining more than 90% of its finish and the face of the scabbard retaining about 70%. The face of the scabbard shows some thinning and wear to the finish, with a couple of patches that appear to have oxidized and been lightly cleaned, leaving a medium purple patina. The scabbards shows some very lightly scattered oxidized freckling on its surface, but is free of any pitting or rust.

Overall this is a really outstanding example of an early production World War I trench knife that is not regularly found on the collectors market for sale in this condition and complete with the scabbard. This would be a great fantastic addition to any collection of military fighting knives or Great War edged weapons and would be really cool to display with your US M-1918 Trench Knife, especially if you have an Au Lion, as it clearly shows the inspiration for the blade of that famous knife This is a knife that would be very difficult to upgrade, and is the finest example that I have seen for sale in quite some time.