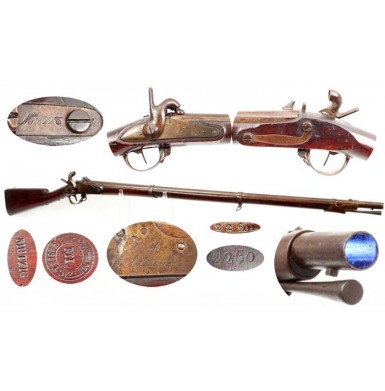 This is a really attractive, complete and untouched example of the French M-1822T flintlock musket, converted to percussion. These obsolete muskets were imported to the US Ordnance Department by the thousands first few months of the American Civil Civil War. The French M-1822 was the last flintlock infantry musket to see widespread use in the French army and remained in production for about 2 decades, finally being officially replaced by the very short lived M-1840 percussion musket. As originally produced, the M-1822 was a flintlock with a conventional (“forward action”) lock, a .69 smooth bore, and a 42 ““ barrel for the line infantry and a 40 ““ barrel for the Voltiguers (light infantry). All were iron mounted with three barrel bands, with upper one being double strapped. The M-1822 was the pinnacle of development for the flintlock infantry musket in French service, and so impressed the US Ordnance Department the US M-1835/40 flintlock musket was based upon the M-1822. As with most military powers, the French started to experiment with the percussion ignition system for military arms during the 1830s. In 1837 the first French percussion military arms were issued for field trials, and in 1840, the percussion system was officially accepted by the French with the adoption of the M-1840 “back action” lock percussion musket. As with most of the military powers in the world, the French quickly found themselves with thousands of now obsolete flintlock military muskets and no easy or inexpensive way to replace them with new percussion models. To that end, in 1841, the French entered into a large-scale system of altering flintlock M-1822 muskets to percussion. The alteration system was very similar to that used by the United States for most of their alterations. While the US “Belgian” conversion system simply “upset a lump” to form a cone seat for the percussion cone (nipple) to screw directly into the breech, the French system used a somewhat more substantial cone seat. Both systems then used newly fabricated percussion hammers to replace the flintlock hammers. All external flintlock battery parts were removed, and the attendant holes in the lock were filled, usually by simply cutting off screws flush after the holes were plugged. Several variations of the percussion altered bolster were used by the French, with some of cone seats more nearly resembling those used on the French M-1840 and M-1842 muskets, and some being quite similar to the US “cone-in-barrel” Belgian conversion system. After the muskets were altered to percussion, their barrel tangs were marked with a T for transformed, after the model designation Mle 1822. After the French adopted the rifled arms for general issue to the French military, many of the M-1822T muskets were altered again to .708 caliber and rifled with four lands and grooves. These arms that had been altered a second time were usually marked bis after the Mle 1822T designation on the breech plug tang, meaning again (as in “transformed again”). The general rifling of the M-1822T muskets began in France in 1860, but soon proved to be less than satisfactory, as had been the case with similar US attempts to rifle percussion altered flintlock muskets. The thin barrels walls, rendered thinner by the increase in caliber from .69 to .708, and the subsequent rifling often left the guns too weak to be safely used with Mini” style ammunition. The French tried to fix the problem by using newly made barrels for these altered muskets, but the results were still far from stellar. With the outbreak of the American Civil War, the French saw a perfect opportunity to dispose of the thousands of obsolete and now potentially hazardous arms to the American belligerents. During the first 18 months of the war, the US government obtained some 147,000 “French & Belgian Muskets, caliber .69-.71” from a variety of sources. Due to poor record keeping, and the fact that the average ordnance officer could not differentiate between the various French patterns (let along distinguish whether the guns were made in France of Belgium), it is impossible to know how many of these 147,000 muskets were French M-1822T muskets. It is believed, however, that more than half of those guns were French M-1822 muskets or Belgian made copies there of. Amazingly, the US Ordnance Department classified the percussion altered and rifled French muskets as 2nd class arms, when similarly rifled US M-1816/22 muskets were generally considered unsafe for issue! Even the smooth bore, percussion altered French muskets were considered 3rd Class arms. The guns were treated as being nominally .69 caliber and issued the same .69 ammunition that was used for US smoothbore and rifled muskets of that caliber. While many of the muskets were well worn and in less than great condition, the only major complaint about them listed by the Ordnance Department was that their recoil was “objectionable” due to their caliber. One small group of Belgian made M-1822T muskets can be positively identified as being delivered by international arms dealer Herman Boker. His Sample #17 consisted of 640 Belgian made percussion altered rifled muskets with locks that were described as “front action”, indicating that they were not the later M-1840, M-1842, M-1853 patterns. Even though the inspecting officers described the guns as “worn out”, they were still accepted, and Boker was paid $7.98 each, as the gun “might be of some use”. While hardly attractive or 1st class like the English P-1853 Enfield rifle musket, these French & Belgian percussion altered muskets did lots of service with early war US regiments until better arms became available. Even though the Confederacy concentrated on buying higher quality arms like English Enfields and Austrian Lorenz rifle muskets, they too obtains at least some of the large bore French and Belgian altered muskets and some were still in service at the end of the war, particularly in the Western and Trans-Mississippi Theaters of operation.

This is an ATTIC FINE condition example of a French M-1822T bis Rifled Musket. The tang of the musket is clearly marked Mle 1822T bis with the tang screw separating the word “bis’ from the rest of the model designation. This is the Voltiguers, or “Light Infantry” model with the 40 ““ barrel. The gun was originally manufactured at the famous St. Etienne arsenal and is marked on the lock in script: Mre Rle / de St Etienne (manufactured at the Royal Armory at St. Etienne). The musket was altered to percussion and subsequently rifled, and both operations took place at the Mutzig armory. The gun is numbered 2260 on the left barrel flat and the reverse of the stock, to allow the reassembly of the non-interchangeable parts musket after the percussion alteration process. In 1862 the gun was again altered at Mutzig (“bis”) by rifling with 4 grooves and enlarging the caliber to .708 (18mm). This alteration is noted by the stamping of a circular cartouche on the obverse buttstock that includes the date 1862 and MUTZIG around the initials MI, which stand for “Manufacture Imperiale (Manufactory Imperial). The obverse buttstock is also crisply stamped MUTZIG vertically near the buttplate, and with a series of inspection marks and the rack number 343 / 13. The left breech of the barrel is marked with French proof and inspection marks, as well as an illegible date, which is either the original manufacturing date or the date of the percussion conversion. The gun is 100% complete, correct and original in every way, and other than being wiped down with an oily rag to remove many years of dust and surface grime on the gun, does not appear to have been touched in many decades. The musket has a very attractive; bronze toned brown patina over all of the iron surfaces that are a mixture of oxidation from age and old oil. Moving the barrel bands shows bright steel under them, where the metal has been protected from the air, as well as some old, dried oil. The metal is mostly smooth, with no significant pitting or surface roughness, other than some lightly scattered noticeable around the breech/bolster area and the muzzle. The balance of the metal is smooth and shows only some lightly scattered areas of minor pinpricking and peppering. The lock of the musket is in EXCELLENT mechanical condition. It remains very crisp and works well on all positions, and has a very strong mainspring; probably the original flintlock spring. The bore of the musket is in VERY GOOD condition and retains very crisp four groove rifling. The bore has a medium brown patina, similar to the exterior of the musket, and shows light pitting along its entire length. There a few areas of more moderate pitting present in the bore as well. The bore is somewhat dirty and might be significantly improved with a good scrubbing. The musket retains both of the original sight from the rifling alteration in 1862. The correct pattern fixed block rear sight with a notch is present on the breech plug tang, and correct iron right sight blade with a rectangular base is present on the barrel, behind the forward strap of the double-strapped upper band. The musket retains both original sling original swivels, as well as its original trumpet shaped iron ramrod. The rod is full length, and the end with the threads has been field altered to form a crude wiper or worm. The stock of the musket is in FINE overall condition, with no breaks, cracks or repairs. The stock is very crisp, with strong markings throughout and no indications of having ever being sanded. All of the lines and edges remain very crisp and sharp. The stock does show the expected bumps, dings, rubs and mars that would be expected on an early 19th century military musket that probably saw many decades of service both in flint and percussion and likely on two different continents! The wood has a deep, brown hue with hints of reddish undertones and matches the brown patina of the barrel and iron furniture very well.

Overall this is a really nice, complete and correct example of the French M-1822T bis Rifled Musket that displays very well. This is one of those really lovely attic brown guns that remains crisp and sharp throughout and has a wonderful untouched look. It is a great example of the early large caliber, percussion altered rifled arms that the US purchased in huge quantities in order to arm the volunteers of 1861 and 1862. This would have probably been among the last of the large caliber, percussion conversion European rifled muskets to have been imported by the US, as the date of rifling on the stock is 1862. The late arrival of this “2nd Class’ musket and its quick replacement by better arms by the end of 1862 probably account for the wonderful condition it has remained in over the years. This would be a great example of an early US Civil War import musket to add to your collection, for a very reasonable price. I know you will be proud to display with very crisp and attractive example.