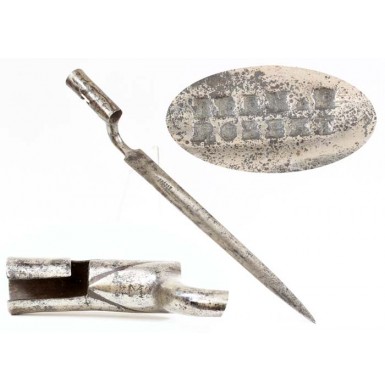 The socket bayonet in French military service appeared slightly before the English began to experiment with the concept. The first serious flirtations with the idea of replacing French pikemen with musketeers equipped with socket bayonets occurred circa 1669 and the concept had evolved to the point of some practicality by about 1689. However, the initial demonstrations went poorly and it was not until almost a decade later that the socket bayonet became a somewhat common weapon for the French infantry, with long shanked socket bayonets being relatively common by the latter portion of the 1690s. It was not, however, until the contract of 1717 that the socket bayonet in the service of the French infantry became somewhat “standardized”. This variant was a triangular bladed bayonet with the profile that we normally associate with a typical socket bayonet, but the blade was unfluted, with all three sides being flat, much like the Confederate “Three-Square” bayonets produced nearly a century-and-a-half later. The concept of the “hollowed” or fullered bayonet blade was not unknown to the French and contracts had referred to this style of blade making as early as 1716, but it is generally considered today that the flat bladed bayonet, even though it was not as strong or suitable for service as its fullered brethren, was enough cheaper than the fluted blade to justify producing them. The 1729 contract, however, soon started to specify the fullered or “hollowed blade” for the socket bayonet. The bayonets of both these contract periods had simple, two-step mortises (cut for a top mounted bayonet stud) without a bridge to reinforce the socket at the rear. The shank was joined to the bottom of the socket, which was a flat piece of metal that was then hammer welded shut around a mandrel. The typical socket length of the 1717 and 1729 bayonets was slightly more than 3” and typically less than 3 “, with the blade typically between 13” and 14” in length. Due to the variations in manufacture and handmade nature of the somewhat crude construction, variations in extant examples are noted. The form of the bayonet also evolved during this period, with a decorative “shield” shaped lump appearing on the bottom of the socket where the socket and neck were joined, much like the British “Shield Shank” bayonets of the same general period. Between 1740 and 1750 the minor changes and improvements in overall design and refinements in construction came to be codified as what we know as the French Model 1750 Socket Bayonet. This became the most used French pattern socket bayonet in North America during the Seven Years War (French & Indian War) and the pattern continued to see significant service through the American Revolution. The specifications for the pattern are rather specific, laying out the overall dimensions for the bayonet and its description quite clearly. The dimensions specified are given in lignes, an antiquated French unit of measure that is 1/12 of a pouce, which was the French “inch”. A pouce was slightly longer than a standard inch at about 1.0654”, and a ligne at one 1/12 of a represented pouce about .0888”. Thus, the socket of the bayonet, given a length of “3 pouces” in the specifications, would translate to a nominal 3.1968” today, or about 3 3/16”. Similarly, the blade of the bayonet, listed as being “13 pouces” comes out to 13.8528” or about 13 13/16”. As noted, due to the somewhat crude production measures and hand manufacturing, the dimensions of extant examples vary. The blades of the Model 1750 bayonet were deeply fullered with a prominent spine along their backs, with a fuller so wide and long as to give the face of the blade a nearly completely convex cross section. The decorative “shield shank” was codified in the 1750 specifications, with the note that the “The junction of the socket and shank to be extended to the mortise with file strokes, to form an oval shape.” This pattern of bayonet retained the two-step mortise of the earlier one, without the additional third step, cut toward the muzzle, which was added with the Model 1754 bayonet. This third step in the mortise was a significant improvement in securing the bayonet to the musket. As no significant changes were made to the general specifications for socket diameter, muzzle to stud distance or the orientation of the bayonet for bottom rather than top stud mounting, the M-1750 could be used (in theory) on earlier pattern infantry muskets as far back as the 1717, within the limitations of interchangeability offered by the manufacturing techniques of the period. Further, as improvement of the M-1754 three-step mortise became more widely understood and appreciated, many M-1750 bayonets were subsequently modified with a third step to make them more functional as well. I am deeply indebted to Erik Goldstein’s monograph The Bayonet in New France for much of the forgoing information. It is worth noting that Mr. Goldstein further notes that the Model 1754 bayonet, which replaced the M-1750 during the period of the French & Indian War, did not see service in the American Colonies in any quantity until the period of the American Revolution, making the M-1750 the typical of French bayonet to see use in America not only during the French & Indian War period, but through the early part of the American Revolution as well.

Offered here is a VERY GOOD condition example of a scarce French Model 1750 Socket Bayonet, typical of manufacture from the period of about 1745-1754. While bayonets of this period are hardly common, this one is even more scarce in that the blade is maker marked in two lines at the base of the face flute. Mr. Goldstein notes a similar marking on a “Hollow Blade” 1716 contract bayonet with a “shield shank” which reads JEAN D. / MICHE in two lines, who he believes may be identified as a man “working as an arquebusier at Li’ge about 1725”. This blade reads JEAN . D / ROBERT, but the name is somewhat difficult to read due to the deepness of the stamping. This mark is almost certainly the name of an arms maker in either Li’ge or France, but from what research I have been able to do is a name lost to the ages. The only other mark visible on the bayonet is a deeply scribed M about ““ wide, located behind the shank on the decorative “shield” joint. This join has the clearly visible incised lines filed into its edges, as described in the 1750 bayonet specifications. The bayonet has the following dimensions:

Due to the fact that socket is somewhat out of round, and muzzle end of the socket has been compressed during its service life to more securely fit the musket it was mounted on, the diameter of the socket is approximate and different measurements can be obtained at different points of the socket interior. The socket shows a wonderfully crude lap welded seam along its top, where the two halves of the socket were hammer welded closed around a mandrel. As is standard for the French bayonets of the period, the rear of the socket had no reinforcing bridge, allowing this area to be expanded and compressed as needed to accommodate the muzzle diameter of the musket to which the bayonet was attached. The two step mortise has been modified with a very short third step, indicative of a M-1750 bayonet that saw use in the period after the adoption of the M-1754 bayonet. It is clear that the mortise was modified and not produced as a three-step socket because the first mortise cut extends to the base of the shield joint on the bottom of the socket. This step is shorter on the three-step sockets, as the muzzle to stud distance specification for the 1754 bayonet did not change, and in order for the bayonet with the third step to seat correctly at the muzzle of the musket, the first step had to be shorter so that all three steps still ended at the same location as the old two-step mortise. As a result of the modified “third step”, the end of this bayonet’s socket would seat slightly below the muzzle of the gun it was attached to. As noted previously the bayonet is in about VERY GOOD condition. It has a mostly bright steel patina and was probably lightly cleaned at some point in time. The bayonet shows moderate pinpricking and light pitting over most of its surfaces, with scattered patches of dark oxidation and age discoloration as well. As noted the socket is slightly out of round and shows a very crude lap seam on its top. A couple of small cracks are present at the end of the second and third mortise steps, likely the result of the cutting and filing required by the modification of the mortise. The face of the shank has a very flat profile and the shank attached right at the front of the socket, features that are more typical of early manufacture than later manufacture. As these bayonets became more standardized, the placement of the shank/neck moved further back from the socket mouth, and the shank became more oval in cross section without the flat face. As a result, this might well represent a transitional bayonet between the 1729 and 1750 contracts, and represent an evolutionary step in the process. As such I think it is rather safe to date the bayonet closer to the 1745 period of M-1750 production than the 1754 period. The bayonet is solid and full length, with no indication of having been shortened or altered after the period of use. The bayonet could certainly mount upon an appropriate French musket of the period with a top stud today.

Overall this is a very nice example of a scarce, maker marked French M-1750 Socket Bayonet, which would be a wonderful addition to any collection of arms from the period of the French & Indian War or the American Revolution. The bayonet would be a fine accompaniment to the display of a French infantry musket of the period with the M-1728 and M-1746 infantry muskets being most appropriate, although the modified socket would certainly indicate that is bayonet not be out of place on a M-1754 musket either. All arms from this early part of American history and the Colonial Era in general are extremely scarce and sought after. While it is impossible to determine if this bayonet saw use in North America, it is certainly of the correct type and pattern to have been used for more than three decades during the tumultuous period of the French & Indian War or the American Revolution. Considering that this bayonet is more than 250 years old, it is in a wonderful state of preservation and considering the scarcity of items from the period, is a real bargain when compared to the prices of the muskets and swords of the era.