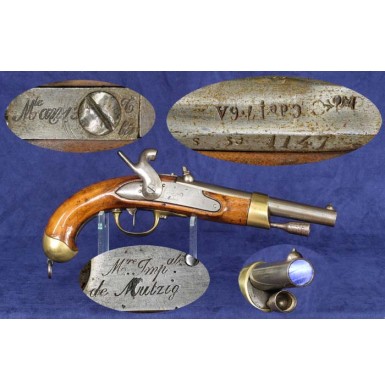 In 1805 the French military adopted a new cavalry pistol for general issue, which would continue to serve the country for half a century! The new Model AN XIII (Year 13) pistol was designated based upon the French Republican Calendar, with the first year being 1792 when the French Republic was officially established as a result of the French Revolution. The pistol was a refinement and improvement of the earlier AN IX (Year 9) pistol, with a redesigned forend, a single strap barrel band replacing the double strapped band of its predecessor and the elimination of the band spring, replacing it with a set screw. Like its predecessor the AN XIII was a single shot, flintlock muzzleloading pistol with a 17.1mm bore, a 201mm barrel and a 370mm overall length. The pistol was brass mounted with the iron barrel, lock and extended backstrap left in the bright. A lanyard ring was attached to the bottom of the brass buttcap. The forward action lock was marked by the French national armory that produced the pistol and the barrel tang was marked with the model of the pistol. Some 300,000 of the AN 13 Pistols were produced by the French arsenals at Charleville, Maubeuge, St. Etienne, Tulle, Versailles, Mutzig and Torino between 1806 and 1814. The pistol was superseded by the Model 1816 pistol but continued to serve the French military well into the mid-19th century. In 1840, the French adopted the percussion ignition system and the following year large numbers of AN XIII pistols were altered to percussion. These guns were marked on their tangs with the addition of a letter “T” after the model designation, indicating the gun had been “transformed”. In the 1850’s the French adopted rifled arms for general issue, based upon the expanding base ammunition concepts of Claude Mini”. Between 1854 and 1857 the French arsenals again altered all of the AN XIII pistols still in service to rifled arms. The bores were rifled with four lands and grooves of approximately equal width, with the process expanding the bores to a nominal .70 caliber (officially 17.5mm). A rudimentary fixed rear sight was added to the breech tang and front sight was added as well. The ramrod was also changed. The original button head rammer for round ball was replaced with a heavy cupped head ramrod similar to that used by French rifles of the period. These rifled arms were again marked on the tang noting the modifications with the designation “bis”, literally meaning “encore”, or more simply “again”. Thus, the new designation was “Model AN XIII Transformed Again”. Amazingly, at a time when many militaries around the world were transitioning to the use of percussion and later cartridge revolvers, the French continued to keep AM XIII pistols in the field in at least limited service through the period of the Franco-Prussian War 1870-1871. It would not be until the general adoption of the M1873 Ordnance Revolver that the AN XIII would end its military service with the French.

Offered here is a FINE condition French Model AN XIII T bis pistol. The breech tang is marked in script with the model of the gun: Mle an 13 T bis. The gun was originally produced at the French Imperial Arsenal at Mutzig in the north-western part of France, along the Rhine river valley, bordering Germany. The lock is clearly marked in two lines of script: Mre Impal / de Mutzig, along with various French controller and inspector marks. The left breech flat is serial numbered 1147 and the upper left side of the breech is marked with the production date Cde 17.6A, along with additional proof and inspection marks. The stock flat opposite the lock is marked MUTZIG as well and the three-line unit mark U J / 5 5 /19 is stamped on the reverse of the grip.

As noted, the pistol remains in about FINE condition with all markings in the metal crisp and clear. The iron barrel, tang and lock all have a medium pewter gray patina with scattered light surface oxidation and minor discoloration. The metal is mostly smooth, free of any real pitting, and shows only some lightly scattered pinpricking. The lock is in mechanically EXCELLENT condition and functions correctly on all positions. Like most European percussion arms, the half-cock position is just barely off the cone, acting as a safety position, rather than a capping position. The bore of the pistol is in FINE condition as well. It remains mostly bright with crisp rifling and only some lightly scattered oxidation, minor discoloration and light pinpricking present. The brass furniture has a medium, mellow golden patina over all of the surfaces. Both of the original sights, added during the rifling alteration are present. The original notched rear sight is still in place, as is the added front sight. The original lanyard ring is in place in the butt of the pistol, and the original heavy cupped ramrod that was added during the rifling alteration is present as well. The rod is full-length and still retains fine threads on the end. The stock of the pistol is in VERY GOOD+ to NEAR FINE condition. The stock is solid and full-length and free of any breaks, cracks or repairs. The stock shows a couple of very minor slivers of wood loss along the edges of the sideplate recess, as well as the usual scattered bumps and dings from handling and use, but no abuse. The stock may have been very lightly sanded at some point, but the only real condition issue is that it was varnished as some point in the past and a thin coat of glossy finish is present over all of the wood. The bright side is that this finish probably helped preserve the gun and kept the stock markings from being worn off over the years.

Overall this is a solid and attractive example of a percussion altered, rifled and sighted French Model An 13 T bis Pistol. The gun remains in very nice condition with crisp markings, a good action and a fine bore. This gun would be a nice addition to any collection and is a lot of gun for not a lot of money, priced cheaper that most mid-grade Civil War cavalry sabers are these days.