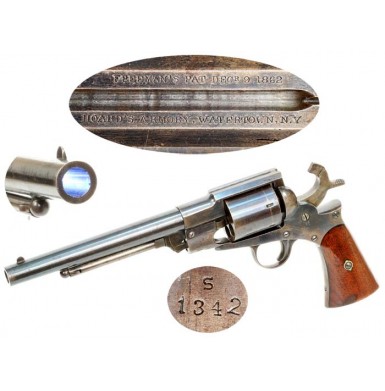 The Freeman Army Revolver, as produced by Hoard’s Armory, was a .44 caliber, single action, 6-shot handgun. It had a 7 ““ round barrel and a solid frame with a topstrap. The revolver had an overall length of 12 ““ and weighed a solid two pounds, twelve ounces. The revolver’s frame, barrel and cylinder were blued, with the hammer and loading lever color case hardened. The cylinder was retained by Freeman’s patented cylinder arbor system. The two-piece grips were walnut, and were secured by a screw that passed through a pair of brass escutcheon plates. While the first few revolver appear to have had frames that exposed the barrel threads at front of the cylinder and had thin recoil shields to the rear, the large majority of the guns that were actually produced had concealed barrel threads and conventional, rounded recoil shield. The revolver had a passing resemblance to the Remington design of the period and as has been noted, there are significant similarities between the Freeman and the Rogers & Spencer design, although there is no indication that the Utica, NY produced Rogers & Spencer had any direct association with Freeman’s design or Hoard’s Watertown, NY manufactory.

Offered here is one of the very scarce Freeman Army Revolvers in FINE overall condition. The revolver is marked in the usual way, on the top strap on either side of the sighting groove. One side reads FREEMAN’s PATENT DECR 9, 1862 and the other side reads HOARD’s ARMORY, WATERTOWN, N.Y.. The revolver is serial number 1342, and this matching number is present on the left grip frame (under the grip), under the frame, on the loading lever, on the bottom of the barrel (concealed by the loading lever), on the cylinder arbor pin latch, on the rear face of the cylinder and in pencil inside both the grip panels. A small S is stamped above the serial number on the bottom of the frame, likely a Hoard’s Armory workman’s inspection mark. The revolver remains in crisp condition with all markings remaining clear and legible. The revolver retains about 40% of its original finish, with about 50% faded and thinning blue on the barrel, about 40% on the cylinder, and 30%+ on the frame. Only the gripstrap and backstrap show significant finish loss, with little finish remaining and a mostly smooth grayish brown patina on the metal. The color case hardened hammer retains about 50%+ vivid case coloring, with some dulling and fading and the loading lever retains about 30%+ case coloring, with most of the remaining vivid color near the operating hinge, just forward of the frame. The balance of the lever has a slightly mottled, smoky gray patina. The metal is mostly smooth throughout with some scattered flecks of minor surface oxidation and some light pinpricking present. Most of this is on the frame just forward of the cylinder mouths, around the muzzle and on the neck of the hammer. All of the recessed cones (nipples) in the rear of the cylinder are original, and remain in very crisp condition. The cone recesses do show some light surface oxidation and some minor erosion from percussion cap flash. The action of the pistol is mechanically EXCELLENT, and the revolver times, locks up and indexes perfectly. The bore of the revolver is in about VERY FINE to NEAR EXCELLENT condition, and remains almost entirely mirror bright with excellent, crisp rifling. The bore shows only some minor dirt and some lightly scattered pinpricking along its length. The two-piece walnut grips are correctly numbered to the revolver and remain in FINE condition as well. They are free of any breaks, cracks or repairs, but do shows some lightly scattered handling marks and minor mars, as well as some dings and scuffs on their bottoms “ possibly from being stored in a keg in the carriage house attic!

Overall, this is a FINE condition example of a scarce Austin T. Freeman Army Revolver. The gun is 100% complete, correct and original in every way, is in wonderful mechanical condition with a great bore and retains much of its original finish. These guns are scarce enough that I have never had the opportunity to offer one for sale before. This is a particularly nice example and it would be a great addition to any advanced collection of Civil War revolvers, especially one that centers on “Secondary Martial” handguns. This gun has a really interesting story and is a great example of one of the many failed attempts to produce arms in the north during the Civil War, as contractors looked for the opportunity to make money from a government desperate for small arms. You could call the Freeman Army the “contract revolver that never was”, as the guns were never completed in time to be delivered, even though Hoard received both a contact and an extension to that contract. I am very sure you will be quite pleased when you add this fine example to your collection, and will certainly enjoy displaying it and telling the interesting background story about these scarce US Civil War contract revolvers.