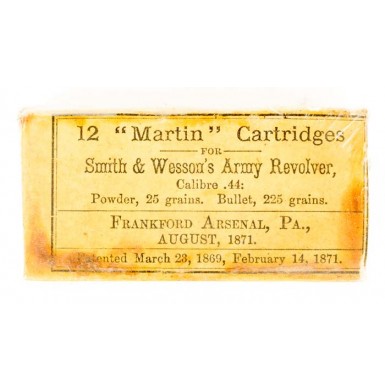 In 1870 Smith & Wesson introduced a new cartridge revolver that would become the basis for at least five other models, and that would remain in production in one form or another for some four decades. The Model No 3 First Model, which eventually received the moniker “American”sometime in 1872, after a major contract was signed to provide revolvers of the #3 pattern to the Russian military, was the prototypical large frame Smith & Wesson handgun of the old west period. The revolver was chambered for the .44 S&W American cartridge, with less than 100 being manufactured in .44 Henry Rim Fire. The cartridge was simply known as the .44-100 when it was first introduced, but which had to be differentiated from the “Russian” variant of the .44 cartridge after that contract was signed. The Model No 3 was a single action revolver with a six-shot cylinder and a ribbed, 8” round barrel. The revolver incorporated a number of “firsts” for the company, as it was the first centerfire revolver that Smith & Wesson produced. It was also the first .44 caliber handgun, the first “large frame” handgun and most importantly the first gun to feature a tip down barrel with simultaneous extraction. The revolver was originally designed for the 1870 US Ordnance Board handgun trials and performed well enough that a contract for 1,000 guns were received by the company in December of 1870, with the deliveries made in March of 1871. These “martial” #3 Americans appear to be somewhat evenly distributed within the serial range of 125 to 2199. One of the features that made the #3 so appealing was the “simultaneous” extraction system. By lifting a latch on the top of the frame the action of the revolver was opened and as the barrel was tipped down, a star extractor, powered by a ratchet mechanism, withdrew the cartridges from the cylinder, and expelled the empty cases. It was then an easy matter to replace any spent rounds, close the action and be ready to use the revolver again. By comparison, Colt’s competing design, the Single Action Army, released in 1873, required a slow system of manual extraction of each spent case one at a time, with an equally slow loading process. The simultaneous extraction system would be so successful and popular that a number of Smith & Wesson models in multiple frame sizes and calibers would utilize it, well into the 20th century. The first 1,500 or so of the #3 American revolvers were manufactured with a tiny “oil hole” in the bottom of the barrel web, just in front of the frame hinge and ratchet system. This allowed for the ratchet mechanism to be lubricated. It was discovered that this was an unnecessary feature and was eliminated somewhere between serial numbers 1450 and 1537. In all, Smith & Wesson would produce about 8,000 Model # 3 “American” First Model revolvers between 1870 and 1872, when a refined version the “Second Model American” would replace it. Many of the small design changes and improvements can be credited to changes requested by the Russian government, who had ordered some 20,000 #3 Revolvers in 1871. The initial successes of the #3 made the gun very popular in a number of circles. Major George W. Schofield of the 10th US Cavalry, one of the famous regiments of “Buffalo Soldiers”, was one of those people who had a great fondness for the Smith & Wesson design. In fact, Schofield was so impressed with the design that he arranged to act as a sales agent for Smith & Wesson. Schofield sold over 100 Smith & Wesson No 3 American revolvers between the fall of 1870 and spring of 1871. Most of those guns were almost certainly sold to other cavalry officers, and as a result Schofield started to build a foundation of support for the Smith & Wesson design. Schofield suggested a number of improvements to make the revolver more user friendly for the cavalry, with these improvements resulting in the design and release of the 1st Model Schofield Revolver and later the 2nd Model Schofield Revolver, both of which were really modified and improved No 3 American’s, chambered for the new .45 S&W cartridge. Other western luminaries were very fond of the Smith & Wesson design, including William F. “Buffalo Bill” Cody and frontier lawman Wyatt Earp, who supposedly carried a No 3 at the famous shootout at the “O.K. Corral”. Over the next four decades thousands of No 3 variants would be produced, in a variety of calibers and some even fitted with shoulder stocks and long barrels as revolving rifles. The success of the design was resounding, and in the end the average frontiersman was about as likely to have a Smith & Wesson No 3 (or some variant thereof) in his holster as a Colt Single Action Army. All of that, however, started with the Smith & Wesson Model No 3 1st Model American Oil Hole Revolver in 1870.

Offered here is a very rare, unopened Frankford Arsenal produced package of 12 cartridges for the Smith & Wesson 1st Model American Revolver. As with all of the arms adopted by the military in the post-Civil War era, the Ordnance Department took great pains to produce ammunition for the guns themselves, so they were not reliant upon contractor supplied patent cartridges, as they had been with Henry and Spencer cartridges during the Civil War. These early centerfire cartridges were produced with copper rather than brass cases and featured a newly developed priming system. The Martin internal priming system was patented on March 23, 1869 with additional updates patented on February 14, 1871. A folded priming pocket was created inside the cartridge case into which the fulminate of mercury priming compound was placed during manufacture. As the entire system was internal, no obvious primer pocket is visible in the base of the cartridge as it is with modern centerfire cartridges, whose primers are exposed. This also means that to the casual observer, the cartridge will appear to be a rimfire rather than centerfire round. While this system was an improvement over rimfire designs as it allowed the manufacture of more power cartridges, it was not superior to the Berdan system that had been patented in 1868 that had an exposed, external primer pocket that would eventually allow for the reloading of fired cartridge case, something that could not be done with Martin primed cases. The Ordnance Department also had a general aversion to relying upon patents that they did not hold, as they did not control them and had to pay royalties. As such, the Martin system was rather quickly replaced by the Benet Priming, which had been developed by Major Benet at the Frankford Arsenal. However, as this internal priming system was not reloadable either, the Ordnance Department eventually moved to Berdan and finally Boxer primed ammunition that was not only reloadable, but much more reliable in terms of ignition.

The package of cartridges measures 3”x1.5”x1” and the label is clearly block printed on top:

The package remains unopened and is in FINE condition with the original pull-string intact along the rear (upper) edge, depending on how the package is oriented. The package is shrink wrapped in plastic to protect it, with the right end partially exposed from the plastic. The paper wrapper remains clearly and crisply stamped the above markings, but does show some age discoloration and darkening, particularly around the edges. Package is solid and complete with no holes or tears and displays very well.

Overall this is a great example of a very scarce cartridge package from the early days of the Indian Wars, before the US Army adopted the classic Colt Single Action Army revolver and was still felling its way into the world of cartridge revolver technology. These compete packages are rarely found for sale and are the ultimate accessory to display with your martially marked US No 3 American Smith & Wesson revolver.

Please note that because this is loaded ammunition it must by shipped by UPS Ground only, with appropriate ORM-D tags. Ammunition may not be shipped to certain states like California. Please check your local ordinances before ordering.