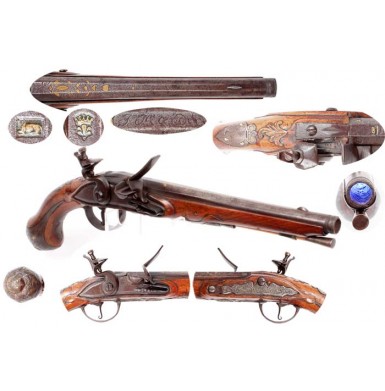 This is a wonderful example of an early 18th century Germanic Cavalry Officers’ Pistol c1750-1770. The pistol is in FINE overall condition, and is crisply and clearly engraved with the maker’s name on the barrel, J Marder. This is almost certainly the mark of Johannes Marder of Bonn. Marder was a masterful gunsmith who worked during the mid-18th century in Bonn, and in 1783 was made the Gunmaker to the Elector of Cologne. The Electorate of Cologne was an ecclesiastical principality of the Holy Roman Empire from the middle of the 10th century through the dawn of the 19th century, which was ruled by the “Elector”. The region incorporated the major cities of Cologne and Bonn, and various other territories, which eventually became part of Prussia in the 19th century and are now part of the North Rhine-Westphalia region of modern Germany. Bonn became the capital of the Electorate of Cologne in 1597 and remained so for nearly 200 years. Marder appears to have worked from about 1750 through the 1790s, and retained his title as Gunmaker to the Elector of Cologne until his death in 1795. The pistol is a wonderful example of mid-18th century gunmaking and is enhanced with engraving and gold inlay over much of the barrel and incised line and raised carving on the stock. The pistol is decorated in flowing French/Italian style, typical of mid-18th century high-grade arms.