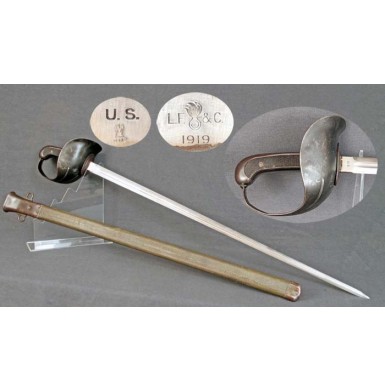 This is a FINE condition example of the last US cavalry saber to be designed and issued by the US military. The US M-1913 Cavalry Saber was more commonly known as the Patton Saber, taking the name of its designer. It is somewhat ironic that the man who would be the father of the “modern cavalry” in the US military was also the designer of the one of the last weapons for the traditional horse cavalry, which had already been made obsolete by the invention of the machine gun. Sadly for many cavalrymen who saw service during the Great War, it was a lesson that was learned hard and with much loss of life.

Lt. George S. Patton designed the sword that would bear his name in 1913. At the time he was stationed at Fort Riley, KS and was “Master of the Sword” at the Mounted Service School. The pervious year he had competed on the US Olympic Team in the modern pentathlon at the 1912 Stockholm Olympic Games. There he finished 5th overall in the Pentathlon. In the five competitions he placed 21st in shooting, 7th in swimming, 4th in fencing, 6th cross-country riding and 3rd in the 4,000 meter run. Although popular myth has long claimed that Patton won a Gold Medal in fencing at the games, he did not compete in the individual épée competition. From the birth of the United States, the US cavalry had followed the British tradition of using and designing cavalry sabers for slashing and cutting rather than the French tradition that used them as trusting weapons. The US cavalry saber remained essentially unchanged from the adoption of the M-1860 Light Cavalry Saber just prior to the American Civil War through the turn of the century. Although there were minor changes instituted in 1872 and 1906, for all practical purposes the US military saber showed no real changes for about 50 years. In 1913, Patton’s design completely transformed the US cavalry saber into a thrusting weapon in the French tradition. Patton’s design was a double-edged, chisel point blade that was 35” in length with a single wide fuller running most of the length of the blade. As “Master of the Sword” taught the traditional French style thrusting cavalry charge exclusively, and noted that “In the charge with the point, all the energy of the horse is conserved and he becomes a steel-pointed missile.” The saber had a large, sheet metal basket hilt with a checkered hard rubber hilt. The saber was carried in a heavy wooden scabbard, which wrapped in canvas that was waterproofed with olive drab paint. The scabbard had iron mounts at the throat and drag, with the drag having a metal spike protruding from the tip. The scabbard was designed to hang from the cavalryman’s horse accoutrements, and not to be worn on the saber belt. The sabers were produced at Springfield Arsenal, and under contract by the Landers, Frary & Clark company, who also produced US M-1917 and M-1918 Mk 1 trench knives during World War I.

This particular example of the US M-1913 Patton Saber is in about FINE overall condition. The blade is full length and retains much of its original factory bright polish and excellent markings. The obverse ricasso is marked U. S. over an Eagle Head and N 312. The reverse ricasso is marked L.F. (Flaming Ordnance Bomb) & C./ 1919. The blade is free of any pitting or roughness and shows only some very light scattered minor age discoloration and lightly oxidized freckling. The sheet metal basket guard retains about 50%+ of its original black paint, with most of the loss on the interior of the guard. The basket shows a couple of minor dents and dings, the result of actual service use. The checkered hard rubber grip is in FINE condition with crisp checkering and no breaks or cracks. The original leather throat washer is in place at the base of the blade, against the guard. The scabbard is in fine condition as well. It is full length with no breaks or repairs. The iron mounts have a lovely plum brown patina, but the drag is missing the spike “ which is almost never found on the scabbards today. The canvas of the scabbard body shows a couple of minor dings, scrapes and scuffs, but no significant rips or tears. The canvas retains 90%+ of its restored olive drab paint.

Overall this is a really high condition and very attractive example of the of the US military cavalry sabers. The sword is complete and correct in every way and would be a very nice addition to any US saber collection and marks the end of the era of the horse cavalry as a fighting force and the birth of the age of mechanized cavalry.