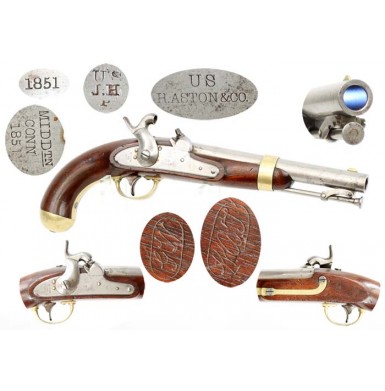 The US M-1842 Pistol as produced by the firms of Henry Aston and Ira N Johnson represented both the beginning and the end of an era in US military handguns. This series was the last of the large bore, single shot, smooth bore pistols to be issued in any quantity and would essentially be replaced by the various multi-shot percussion revolvers that the government would begin to purchase during the 1850s and would continue to procure through the end of the Civil War era. It was also the first official percussion ignition pistol to be adopted by the US military. The Johnson and Aston companies produced 40,000 of these single-shot pistols (not counting the “Palmetto Armory” production), with Aston producing some 30,000 of the guns. The M-1842 fired a .54 caliber round ball from an 8.5” smooth bore barrel, using the same ball as the M-1841 Mississippi Rifle. The 14” long pistol was the general service pistol of the time for the US military and saw use with the infantry, cavalry, dragoons, and artillery. Like previous single shot military pistols used by the US, this one had a large bulbous, metal-capped butt that was designed to allow the pistol to be used as a club after discharging it. The end result is that cracked and damaged stocks are quite commonly encountered on these pistols.

This pistol is in VERY FINE condition, with very crisp markings and excellent cartouches. The lock is marked: MIDDTN / CONN / 1851 in three vertical lines behind the hammer and US / H ASTON in two lines horizontally forward of the hammer. The tang of the pistol is dated with the matching 1851 date, and the breech is marked: US / JH / P in three lines. The initials JH stand for Springfield Armory sub-inspector Joseph Hannis who worked for about two decades as a civilian arms inspector for the Ordnance Department. The barrel flat is also clearly marked with a small M inspectors mark. The small, single capital letter sub-inspectors mark W is present on the pistol on many of the various small metal parts, like the two brass side plates and the triggerguard. The sub-inspection mark M is found on the barrel flat, as already mentioned, and on the backstrap and the face of the ramrod plunger. The lock functions very crisply and is mechanically excellent, with most of the internal parts retaining the large majority of their bright, fire-blued finish. The original captive, swivel mounted iron rammer is present and functions exactly as it should. The iron barrel of the gun has a very pleasing, medium pewter patina, and was probably lightly cleaned at some point in time. The barrel is mostly smooth, with some lightly scattered pinpricking along its length, with the most evident areas being at the breech and bolster area as well as near the muzzle. There are also some evenly scattered flecks of minor surface oxidation present on the metal. The lock and hammer show more of the original brightly polished finish, with slightly less dulling than the barrel shows, but some lightly oxidized surface mottling is present along with some pinpricking around the center of the lockplate. The screw heads that retain the lock, barrel tang, butt cap, etc. are all in good condition and retain trace hints of their original heat blued finish. The brass furniture has an attractive mellow, mustard patina. The bore is mostly bright and quite smooth, showing only some lightly scattered minor pitting along its length. The bore would probably scrub up nicely and be really outstanding with a little polishing. This work would make this pistol a great candidate for the newly authorized smooth bore pistol matches in the North-South Skirmish Association. The original brass front sight blade is present and in fine condition. The stock is in about FINE condition as well and is very crisp. The stock is quite solid and free of any breaks, cracks or repairs. The wood does show a handful of minor bumps and dings from service and use. The stock flat opposite the lock retains two excellent inspection cartouches. The rear most is a script WAT cartouche, the final acceptance mark of Captain William Anderson Thornton of the US Ordnance Department. Thornton worked inspecting and accepting arms from 1840 until 1866. The other cartouche is a very crisp script GW, the mark of Armory Sub-Inspector George Wright, who sub-inspected inspected Aston pistols from 1850-1852. It is Wright’s “W” that is found on many of the small parts. The stock retains very sharp edges and crisp lines and shows no indication of having ever been sanded. There is one tiny area of apparent wood loss under the front edge of the lockplate. While this looks like a missing sliver, it appears to be an impact mark, with the wood slightly depressed, rather than removed. Otherwise there are no stock issues worth mentioning, and even this minor mark does not materially affect the display of this fine pistol.

Overall this is a very nice and extremely crisp example of the last of the big bore martial single shot pistols used by the US government. The gun is 100% complete, correct and original. This US M-1842 Aston pistol shows some actual use, but no abuse and is a really solid example of this pattern of pre-Civil War US pistol. This would be a great addition to any collection and at a very reasonable price considering its condition. This gun displays like a $1,750+ example but is priced somewhat more reasonably. It would certainly be a great candidate to use as a shooter for the new N-SSA smooth bore percussion military pistol matches, as it has a nice bore and the lock parts are in exceptional condition without the often found crack in the bridle.