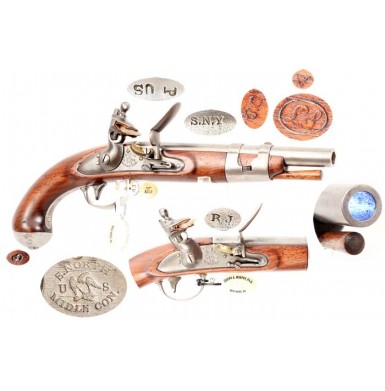 The Simeon North US M-1816 Army Contract Flintlock Pistol was the first US martial pistol to be delivered on a truly large scale. Previous US military pistol contracts were typically for fairly small runs with 2,000 to 3,000 being the typical example of a “large” contract (often expressed as 1,000 pairs or 1,500 pairs), with quantities under 500 being typical of most of the contracts let to gun makers from the late 1790s through post-War of 1812 era. The M-1816 had its genesis in the Simeon North Army Contract Pistol of 1811. This pistol was contracted for on November 18, 1811 and the contract was for 1,000 pairs of .69 caliber single shot flintlock pistols with pinned barrels and brass furniture. During the production run, it was decided that the pistol should be modified and instead of relying upon pins to secure the barrel to the stock, a double strapped barrel band, secured by “Wickham’s Improvement” (a spring loaded stud retainer) be incorporated into the design. It was in fact US arsenal sub-inspector (and later arms contractor) Marine T. Wickham who suggested the barrel band modification to the Ordnance Department. The last of the M-1811 pistols were manufactured in this fashion, and the subsequent model, the M-1813 pistol also incorporated the double-strapped barrel band and Wickham stud into its design. The M-1813 was contracted for on April 16, 1813 and was a direct result of the United States involvement in the War of 1812. The contract called for 20,000 of the pistols to be manufactured, at the price of $7.00 each. The pistol was an improved version of the previous M-1811 with iron furniture, but retained the massive .69 caliber bore of its predecessor. This excessively large caliber became problematic almost immediately, and production was temporarily halted in June of 1815 to allow the pistol to be re-designed in .54 caliber. Only 626 of the M-1813 pistols were delivered up to this point, and the remaining parts on hand were used to complete a contract of 1,000 .69 pistols for the US Navy (the M-1816 Flintlock Naval Pistol). On January 8, 1816 the original contract for 20,000 pistols was officially renegotiated, and remaining 19,374 .69 caliber pistols that were due under the 1813 contract were to be delivered as the .54 caliber US M-1816 Flintlock Army Pistol, at the newly negotiated price of $8.00 each. North undertook to complete the newly revised contract in a workman like fashion, and proceeded to deliver the complete contract in about 3 years time, with the final deliveries taking place on January 26, 1820. The Simeon North US M-1816 Contract Army Pistol was a large handgun, weighing in at about 3 ““ pounds and having an overall length of about 15 “. The 9 1/16” long barrel is round, with a smooth .54 caliber bore. The barrel is secured to the stock with a tang screw and a double-strapped barrel band with a simple brass blade front sight mounted on the front most strap. The barrel band is secured to the stock by a Wickham’s Improvement stud. The pistol stock is reinforced with an extension tang that runs from the breech of the pistol to the butt cap, and all of the furniture is of iron. The contract called for all iron parts (with the exception of the lock) to be acid browned. The lock was casehardened, and was not polished bright, leaving it a dark, bluish black color, but without the brilliant mottling typical of later 19th century case coloring. The lock had a rounded, reinforced cock and an angled brass pan with a bridle, but no fence. The locks were marked with two types of markings, with the early production locks being stamped with a three-line cartouche shaped mark: S. NORTH / U (Eagle) S / MIDLN CON.. Later production locks were stamped with a similar mark, but which read: S. NORTH / U (Eagle) S / MIDLTN CONN., adding the “T” to the abbreviation of Middleton and the extra “N” in the abbreviation of Connecticut. The pistol was equipped with a hickory ramrod with an iron ferrule on the reverse end that was slotted for use as a cleaning rod, and also threaded to accept implements with male threads for cleaning and ball extraction. The US M-1816 Army pistol would remain in service with the US military for the next two decades, and although a newer design was adopted in 1819, the M-1816 pistols were still being issued from US depots well into the mid-1830s for service in the Seminole Wars. The pistols were also issued in large numbers to the various states under the Militia Act of 1808, and state marked examples of these pistols are encountered from time to time. Even though they truly obsolete by the early 1840s and the age of percussion ignition, many US M-1816 pistols saw new service life during the early days of American Civil War, often with southern arsenal and blacksmith alterations to the percussion system. The many decades of service that these pistols saw, combined the large number of guns that saw hard service as southern conversions during the American Civil War, make these large handguns difficult to find today in crisp condition and in their original flintlock configuration.

This example of a Simeon North US M-1816 Army Pistol is in about FINE overall condition. The pistol is 100% complete and correct in every way and remains in its original flintlock configuration. Even the iron ferruled, tapered hickory ramrod appears to be an original, period of use ramrod. The pistol is crisply marked on the lock with the early marking: S. NORTH / U (Eagle) S / MIDLN CON., suggesting manufacture during the early part of production circa 1817-1818. A very crisp RJ (Robert Johnson) inspection mark is present just above and to the rear of the touchhole. The left breech is deeply marked with a P proof mark and a US ownership mark. The top of the breech is also deeply marked S.N.Y. for State of New York, indicating the gun was sent to that state at some point under the Militia Act of 1808. Practically every metal part of the pistol is marked with the single initial T, which is almost certainly the mark of Springfield Armory inspector Elisha Tobey who became an armorer and inspector at the Springfield Armory in 1815 and was soon sent into the field to inspect contract arms. The left flat of the stock is marked with a very clear script LS acceptance cartouche in an oval, the mark of Springfield Armory inspector Luther Sage. The stock flat is also marked with a bock letter V above Sage’s cartouche, with the inspection initials block J.C, likely the mark of Springfield inspector James Carrington. The stock is also marked on the flat and the grip with the number 3, the significance of which I don’t know. The metal of the pistol has been lightly cleaned, and the iron barrel and furniture have a medium pewter patina. There is light pinpricking evenly scattered over the entire barrel and much of the furniture, with some light pitting around the breech and touchhole, as well as near the muzzle. The lock has a slightly darker smoky gray patina and appears to show some minor traces of the original blue-black case coloring of the lock. The brass pan has a lovely, untouched ocher patina and shows both old powder residue and green verdigris on its surfaces. The lock is mechanically excellent and functions perfectly on all positions. The lock is 100% original flint and appears to retain all of its original, period parts, with no modern replacements. The smooth bore of the pistol is in about VERY GOOD+ to NEAR FINE condition. It is somewhat dirty and shows light pitting evenly distributed along its entire length, but would likely improve with some cleaning, and is free of major pitting or significant wear. As mentioned earlier, the hickory ramrod appears to be original to the period and is complete with a well-worn and lightly pitted iron cleaning ferrule at the end with functional internal threads for the attachment of implements. The stock of the pistol rates about FINE as well. It is solid and complete with no breaks, cracks or repairs noted. The stock was probably lightly cleaned long ago, but shows no signs of standing. All of the edges and lines remain quite strong and relatively sharp, with the only softening of edges being due to handling, use and storage over a lifetime of nearly 200 years. The only issues worth mentioning are a couple of very small chips of wood missing from around the rear of the lock mortise. These are the result of improper lock removal. Their wear indicates that the chips are very old and likely from the period of service. Otherwise, the pistol shows only the usual bumps, dings and minor handling marks expected of a military pistol, but for one approaching its 200th birthday, the stock remains in really wonderful condition.

Overall this is a great example of a very early American single shot martial pistol in a very nice state of preservation. The gun has great provenance, having been a part of Dr. Joseph Murphy’s collection (New Hope, PA). Dr. Murphy’s collection of US martial flintlock pistols was one of the best in the world, both in quality and rarity, and Dr. Murphy’s collection tag remains attached to the triggerguard. There is also another collection tag that pre-dates Dr. Murphy’s acquisition, but the name of the collector is unknown. This is a very crisp and complete example of the US M-1816 Army Contract Pistol with a great provenance and wonderfully crisp and desirable State of New York ownership mark. It will certainly be a fine addition to any advanced collection of US martial handguns.