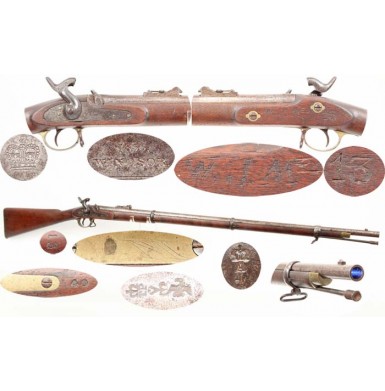 This particular example of the Robbins & Lawrence Windsor Enfield is in about VERY GOOD+ to NEAR FINE overall condition, especially for a rifle musket that almost certainly saw Confederate service. The gun shows real world use, but no abuse. The gun is clearly marked on the lock with a Crown behind the hammer, and is marked 1856 over WINDSOR forward of the hammer. The lock shows no external British military inspection marks, so it was never inspected as an assembled lock by an Ordnance inspector. The inside of the hammer neck does bear the sub-inspection mark (CROWN) / A / 4. The A was the mark required by the British to indicate the location of manufacture; in this case, America. Likewise on other arms a B indicated Birmingham, E the RSAF at Enfield Lock and L for Liege in Belgium. This mark does not mean the gun saw British military service, it simply means the hammer was inspected by a Board of Ordnance sub-inspector prior to the bankruptcy of the company, and was subsequently incorporated into a complete gun by Vermont Arms after the fact. A similar sub-inspector mark is visible on the reverse of the upper barrel band as well. The barrel is proofed with a (CROWN) / TP / (BROAD ARROW) and a (CROWN) / A / “. The second proof mark has been over-stamped with a crude spread winged eagle that has been encountered on other Windsor Enfields with Confederate provenance. It is not clear if the eagle stamp was done at the factory or by the state that received the guns. This stamp mostly obliterates the sub-inspector mark. The same stamp is also present on the flat on the top of the barrel’s breech. This is another place that is typically marked with an Ordnance Department inspection mark, and this eagle either replaces or obliterates that English inspection mark as well. It is quite common to find a mix of British sub-inspected and un-inspected parts mixed on these post-bankruptcy assembled muskets. The only other markings on the gun are the number 13 stamped clearly on the stock flat and behind the triggerguard, and the number 40 stamped into the comb of the stock forward of the buttplate tang. These numbers suggest the gun was issued to a 13th regiment and was gun number 40 of the regiment or company. The initials W J M are neatly carved on the stock flat and the initials W M are scratched into the brass triggerguard tang. These initials are clearly period and typical of those found on southern used rifles and muskets. More than likely “WJM” served in the 13th Alabama, Georgia or South Carolina, as we know all of those states received Windsor muskets. Some diligent research may well be able to identify the soldier that carried this musket.

Overall the gun has an untouched mottled brown over gray patina. The barrel is mostly smooth with some scattered areas of pinpricking and peppering and some light pitting at the breech and bolster areas, as well as the muzzle. There are also some small areas of lightly scattered oxidized surface roughness present on exposed surfaces of the barrel. The underside of the barrel retains about 80%+ of its original blued finish where it has been protected by the stock, and this area shows only some fading and dulling from age and the heat generated when the gun was fired. The underside of the barrel is marked with a small X at the breech end, a 2 under the bolster, and the series of inspection marks F 3 Y B. The rear face of the breech and the rear of the breech plug are both numbered F 583. The bore of the musket is in about VERY GOOD condition and retains strong three groove, progressive depth rifling. The bore is mostly bright with scattered areas of light oxidation and shows scattered light pitting along its length, with only a few small areas of more moderate pitting. A good scrubbing would probably improve the overall bore condition, but it looks as if it is perfectly serviceable in its current condition. The barrel bands have a dark, smoky blue-black patina that is a mixture of their original blued finish and oxidized age discoloration. The solid bands show some scattered areas of light pitting and minor surface roughness, and all retain between 20% and 40% of their original blue. The barrel band springs have a similar patina, showing a mix of original blue and age discoloration. The lock is in mechanically EXCELLENT condition and function crisply and correctly on all positions. The original cone (nipple) is in place in the bolster and shows moderate wear, commensurate with the balance of the gun. The gun retains its original long-range rear sight, as well as the original front sight/bayonet lug. The original full-length, swelled shank, jag-head ramrod is present in the channel under the barrel as well, and it retains good threads at the opposite end. The original upper sling swivel is in place, riveted to the lug on the upper barrel band. The rear swivel is an original Enfield swivel, but is not original to the gun, as it is trapezoidal in shape, and rear sling swivels of interchangeable parts Enfields (like those from The Royal Small Arms Factory at Enfield - RSAF, and the London Armoury Company) were oval shaped. The patina of the swivel matches the gun perfectly and it could a period of use replacement. The brass furniture has a lovely mustard patina that is very attractive. The musket’s stock is solid, and in VERY GOOD+ to NEAR FINE condition as well. As would be expected, the stock shows the normal bumps, dings and service wear of a 150-year-old military musket. The stock appears to have been lightly cleaned in the past and does show some minor softening of the sharp edges, but this likely the result of wear and use, not sanding. There is a small amount of wood loss at the bottom center of the lock mortise, where it looks like a screwdriver may have been used to pry the lock out of the stock. The wood in this area is worn and smooth, and the inept act is probably from the period of use. There are a few small slivers of wood missing along the edges of the ramrod channel, but this is too be expected and in no way affects the displayability or attractiveness of the musket. The wood appears a little dry, so a light coat of good wood feeding oil like Kramer’s Best might be in order.

Overall this is one of the nicest examples of a Robbins & Lawrence Windsor Enfield that I have had the opportunity to offer for sale. Each year I am lucky to see one or two of these rare guns available for sale, and rarely do I have the chance to buy them. Even Flayderman comments that the Windsor Enfields are “rarely encountered”, and show up far less often than their production figures would indicate that they should. The apparent rarity is likely a result of the fact that these guns all saw combat of some sort. Those that were accepted by the British Government nearly all went to war in the Crimea or were sent to various British colonies where they had a very hard service life. The balance of the guns that were sold off went to Mexican revolutionaries and state militia companies on both sides of the Mason-Dixon Line and were in use from day one of the American Civil War. When these guns are encountered today they are often in very rough condition “ an indication of their hard service life, either in British service or during American Civil War service. This rare example of the Windsor Civil War Enfield is a great example of real Civil War used gun that almost certainly went south before (or at the very beginning of) the war. With a little research you may be able to identify the soldier with the initials “WJM” who served in some 13th infantry regiment, likely in Alabama, Georgia or South Carolina. Don’t miss your chance to obtain a truly scare Windsor Enfield, a gun that you may not see for sale again anywhere for a year or two.