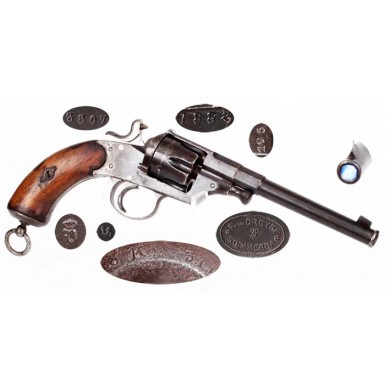 This is a FINE condition example of the M-1879 Reichsrevolver. It is interesting that until the adoption of the M-1879, the standard military handgun used by the German kingdoms was a single shot, percussion muzzleloader! Even though the Prussian military had been using incredibly advanced bolt action needle rifles since their introduction in 1841, they felt little need to improve the arms of their cavalry, instead relying upon the lance and saber as their primary weapons, rather than the repeating cartridge handguns that had become a standard weapon for most western cavalry regiments by the early 1870s. With the exception of some Colt M-1851 “Navy” percussion revolvers purchased by the Kriegsmarine (German Navy), the late 1870s found the state of German military handguns firmly entrenched in the 1840s! The M-1879 Reichsrevolver was developed as the standard military handgun for use by the militaries of the four German kingdoms; Prussia, Bavaria, Saxony and Württemberg. It was 6-shot, single action revolver with a 7 1/8” round barrel with a small octagonal section at the frame juncture, and a reinforcing ring at the muzzle (often referred to as a “cannon” barrel), with a rust browned finish. The revolver incorporated a safety lever on the left side of the frame and had a lanyard ring in the butt cap. The revolver was chambered for a 10.6x25R centerfire cartridge. The cartridge was loaded with a 262-grain lead bullet of about .44 caliber, propelled by a black powder charge with a muzzle velocity of 700 fps and 288 ft./lbs. of muzzle energy. The 10.6x25R is often compared to the S&W .44 Russian cartridge, which is nearly identical in size and power, and was initially produced by Ludwig Loewe & Company (the predecessor of DWM). The M-1879 was produced by three primary manufacturers. These were Gebr’der Mauser & Cie, who supplied the kingdoms of Bavaria and Württemberg, Franz V. Dreyse who supplied the kingdoms of Prussia and Bavaria, and the Suhl consortium of arms makers consisting of Spangenberg & Sauer, V.C Schilling & Cie and C.G. Haenel & Cie, who supplied Prussia, Bavaria and Saxony. In 1883 a slightly more refined and compact version of the M-1879 was approved, the M-1883. It was essentially the same revolver with a 4 5/8” barrel. The large and well-made revolvers remained the primary issue handgun to German state military forces until 1908, when it was superseded by the Parabellum-Pistole 1908, better known simply as “The Luger”. Even though the Luger replaced the M-1879, the revolver remained in use through the World War I era, mostly with second line and reserve troops. Unit marked revolvers are encountered from time to time, allowing the identification of the unit the gun was issued to. Although considered obsolete by World War II, some Reichsrevolvers are reported to have been used by the French resistance during Nazi occupation. The Germans even pulled some Reichsrevolvers out of mothballs at the end of World War II, during the fight for Berlin. This revolver bears a First World War unit marking. The bottom of the grip cap is marked 6 K . 3 . 19, which means 6th Kürassier Regiment, 3rd Eskadron, Waffe Nr. 19, or 6th Heavy Cavalry Regiment, 3rd Squadron, Weapon Number 19. The 6th Kürassier Regiment was known as the Kürassier Regiment Kaiser Nicholas I von Russland (Brandenburgisches), or the Emperor Nicholas I of Russia Regiment from Brandenburg. The regiment was formed in 1807 as a component of the Royal Prussian Army, but could trace its roots to the original 6th Heavy Cavalry from Brandenburg that was originally raised in 1691! During the 19th and 20th century, the 6th Kürassier Regiment fought during the War of the Sixth Coalition (against Napoleon, 1812-1814), the Second Schleswig War (against Denmark, 1864), the Austro-Prussian War (against the German Federation, 1866), and the Franco-Prussian War (against France, 1870-1871) and the First World War. During World War I, the 6th served in the 22nd and 38th Divisions of the XI Corps. The 3rd squadron the 6th Kürassier Regiment finished the war serving with the 38th Infantry. The 38th Division began the Great War fighting on the Western Front in Belgium, but was transferred to the Eastern before the end of the year, where it fought at the First Battle of the Masurian Lakes and during the Gorlice- Tarnów Offensive. In October of 1915 the division was returned to the Western Front, and participated in the Battle of Verdun and the last segments of the Battle of the Somme (1916). Late in the war, the division fought at the battles of Arras and Passchendaele (1918). The regiment was disbanded in 1919 at the conclusion of the Great War.

This M-1879 Reichsrevolver is in FINE overall condition. The left side of the frame, below the cylinder is crisply and clearly marked in a two line, oval cartouche: F.v. DREYSE / SŒMMERDA. Just to the left of the makers mark is the serial number of the revolver, 3807. Also on the left side of the web of the frame, just in front of the cylinder is the date of manufacture, 1882 The upper left side of the frame barrel juncture and the left side of the barrel are also stamped with the serial number 3807, and the left upper flat of the small octagon portion of the barrel is marked with the caliber 10,6. The cylinder arbor pin is numbered 3807 on the upper portion of the knurled projection, and the rear face of the cylinder is numbered 3807 as well. All of the small parts of the revolver are numbered to the gun with the last two digits, 07, with the exception of the cylinder arbore pin release latch, which is numbered 84. The arbor pin catch is the weakest part of the M-1879 design and is often found broken or damaged and field repairs to this part are regularly encountered on extant examples. Numerous small proof and inspection marks are scattered throughout the revolver, on the barrel, bottom of the frame and the bottom of the grip cap. The cylinder chambers are numbered in the style of 19th century English revolver, with the numbers 1 through 6 stamped between the cylinder flutes. The frame, barrel and cylinder retains about 60%+ of their original rust browned finish, which shows some fading and is mixing with a lovely plum brown patina. The metal is almost entirely smooth, with only some minor scattered pinpricking and lightly oxidized freckling present on the metal, with the only notable exception being a couple of small patches of oxidized surface scale and minor roughness on the cylinder. The grip cap, frontstrap and backstrap retain no appreciable finish, and show scattered areas of light pitting. The bottom of the grip cap is unit marked 6 K . 3 . 19, the meaning of which is explained above. The original lanyard ring remains in place in the butt cap and swivels freely. The action of the revolver functions perfectly and is mechanically excellent. The revolver times, indexes and locks up tightly and correctly. The safety lever functions correctly, with the up position allowing the revolver to fire, and the down position locking the action and preventing the revolver from being placed on full cock. The bore of the revolver rates about FINE and is mostly bright with crisp rifling. There is some light scattered pinpricking along the length of the bore, and a couple small areas of light to moderate pitting noted in the bore. The two-piece walnut grips rate about VERY GOOD+ to NEAR FINE. They are solid and complete without of any breaks, cracks or repairs. As would be expected, the grips show scattered bumps, dings and handling marks from service and use. The left grip panel has a pair of initials carved into it that appear to be the letters B E. These are likely the initials of the Doughboy who liberated the revolver and brought it home from The Great War.

Overall this is a very nice, crisp example of a First World War unit marked M-1879 Reichsrevolver. These large, ungainly military revolvers are an important part of any German martial handgun collection. As more than one collector has noted, a M-1879 is the first gun in any chorological collection of modern era German military pistols and realistically belongs as the first “book end” in that collection. With the coming of the Centennial of the Great War next summer, First World War military items are experiencing a surge in prices and values. This revolver has a great WWI unit mark to a famous heavy cavalry regiment, and will be a great addition to your military handgun collection.