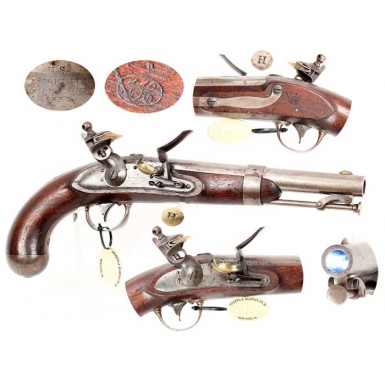 This is a very attractive US M-1836 pistol (Flayderman 6A-034) that is in VERY FINE overall condition. The gun is an 1837 dated example by Johnson that bears a single JH inspection cartouche and does not bear a Henry Knox Craig acceptance cartouche. Due to the research by Mr. Southard, we can be relatively certain that this gun was inspected on October 7, 1837 and was almost certainly delivered for use by the Tennessee volunteer militia that served during the Second Seminole War. The pistol is extremely crisp and remains in its original flintlock configuration. This is quite uncommon with these pistols as the majority of these guns ended up being altered to percussion between the mid-1850s and the beginning of the Civil War. This US M-1836 Johnson contract pistol is clearly marked on the lock in four lines forward of the hammer: U.S. / R. JOHNSON / MIDDN CONN / 1837. The breech is clearly marked in three lines: U.S. / TW / P. The TW is the mark of armory sub-inspector Thomas Warner, and is probably a barrel left over from his inspection of barrels in August of 1836. The stock flat opposite the lock a single crisp and fully legible script JH cartouche. This is the mark of Armory Sub Inspector Joseph Hannis. Hannis’ tiny block letter H mark is also present on the bottom of the brass flash pan, on the left breech flat of the barrel, and on the stock flat, above the inspection cartouche. The pistol is in VERY FINE condition overall, with very nice metal that is quite smooth throughout with only minor peppering and pinpricking present, mostly around breech & flash pan area, and the muzzle area of the barrel. The metal appears to have been very lightly cleaned at some point in the past, and is toning down very nicely. The gun has a medium pewter patina with a thin brown patina forming over the iron barrel and furniture. There are also some lightly scattered areas of age staining and oxidized discoloration on the metal of the pistol. The lock retains about 30% of its original color case hardened finish, with attractive bluish-purple mottling most visible on the lower portion of the plate between the hammer and the flash pan. The lock is mechanically excellent and functions crisply and correctly on all positions. The frizzen remains nice and tight, working as it should, with only some minor surface wear on the face. The brass pan shows good age and shows some light verdigris near the touchhole, and old powder residue and stains in the bottom of the pan. The bottom of the pan shows the correct sub-inspector mark H. The interior of the lock is completely untouched and unmolested, showing the perfect and precise fit of an original flintlock battery. The touchhole is well centered both vertically and horizontally in the pan. The touchhole shows some minor erosion, commensurate with the appearance of the metal on the barrel around the breech area. The iron furniture matches the barrel of the gun perfectly and is free of pitting, with only some very light scattered areas of light peppering, matching the barrel of the pistol perfectly. The .54 caliber smooth bore is in >FINE condition, showing only some minor discoloration, but remaining mostly bright with only some lightly scattered pitting along its length. The original swivel rammer is in place under the barrel and it functions perfectly. The some of the small metal parts show small sub-inspector marks, including a V on the top left side of the trigger and a small X on the left upper side of the top jaw. The original swivel ramrod is in place in the channel under the barrel and operates smoothly and correctly. The stock is in VERY FINE to NEAR EXCELLENT condition, and it is solid and complete with no breaks or repairs. The stock is very crisp and sharp throughout, without any indications of any sanding or even serious cleaning. The grain remains open and attractive, and the edges are razor sharp along the stock flat. There is a tiny surface grain crack present at the tail of the lock mortise, but that is the only stock issue of any significance or worth mentioning specifically. The stock does show some minor handling marks, with the expected dings, bumps and rubs, as would be expected from a military pistol that is over 175 years old. The stock shows no significant wear and absolutely no abuse, and has an extremely pleasing look to it overall.

All in all this is a really attractive and very crisp example of the last official US Martial Single Shot Flintlock pistol. The gun is in wonderful original flint condition, which is rare for any late model marital flintlock weapon. These pistols were the standard issue handguns during the Second Seminole War and the Mexican War, and nearly all of the surviving pistols saw additional Civil War service of some sort. This one is particularly interesting in that it is quite certain that it saw at least some limited Seminole War service, almost certainly in the pommel holster of a Tennessee volunteer militia man. The gun has wonderful provenance, having been a part of Dr. Joseph Murphy’s collection (New Hope, PA). Dr. Murphy’s collection of US martial flintlock pistols was one of the best in the world, both in quality and rarity, and Dr. Murphy’s collection tag remains attached to the triggerguard. If you have been wanting to add a really high condition flintlock pistol to your US martial handgun collection, it would be hard to beat this one for overall crisp condition, completeness, history and provenance.