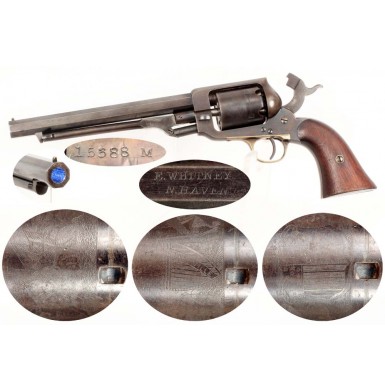 This is a VERY FINE condition example of a Whitney Navy percussion revolver from the era of the American Civil War. The Whitney Navy was a 6-shot, .36 caliber, single action percussion revolver that was manufactured from the late 1850s through the early 1860s. The revolver went into production after Colt’s patent on his revolver mechanism expired in 1857. The first 1,500 or so (aka “1st Model Whitney Navy revolvers) were manufactured without a loading lever and were of lighter construction than the later 2nd Model revolvers. Between the Whitney desire to improve upon the guns, and the habit of making design changes when parts on hand ran out, both the 1st and 2nd Models were manufactured in a number of different “types’ with a clear pattern of evolution that took place throughout their production. Some 33,000 Whitney Navy revolvers were produced during the production run, with many seeing US government use. The US Army acquired 10,587 of the revolvers between 1861 and 1864 and the US Navy purchased an additional 6,226 between 1863 and 1865. The state of New Jersey purchased 920 Whitney Navy revolvers in 1863, but 792 of those guns were subsequently resold to the US Army in 1863 and 1864. Those guns are included in the US Army purchases listed above. A number of Whitney Navy revolvers also appear to have been acquired by the South and saw service during the American Civil War. Some were purchased prior to the outbreak of hostilities, and these guns tend to be early production 2nd Model revolvers produced prior to the spring of 1861. A good example is Whitney Navy #3110, which was owned by Confederate cavalry general J.E.B. Stuart, and is now in the collection of the Virginia Historical Society. However, Confederate forces acquired many more Whitney Navy revolvers after the conflict started. These later production guns were no doubt obtained through a combination of capturing weapons and purchasing the guns surreptitiously from secondary retailers rather than Whitney. At least two-dozen Whitney Navy revolvers are known to have been repaired for use by the 4th Virginia “Black Horse” Cavalry, and a handful of identified Whitney Navy revolvers with Confederate provenance exist was well. It is not surprising that the revolver found favor on both sides of the Mason-Dixon line, as the robust design with a reinforcing top strap, a solid frame with a screwed in barrel and the simple turn of a wing nut to release the loading lever and cylinder arbor were all significant improvements over the open top frame and wedge-retained barrel of the Colt design. The popularity of the revolvers in the south is further indicated by the fact that the design was copied by Confederate gunmakers like Spiller & Burr and T.W. Cofer, both of whom produced Whitney-like revolvers for the south.

Overall this is an extremely crisp and complete example of a Whitney Navy 2nd Model 4th Type Revolver. This is a 100% complete and correct example of a Whitney Navy that is in tremendously better condition than they are typically encountered. The gun is very attractive, and in person (under normal lighting) appears to have even more finish than the harsh photographic lights tend to indicate in the photos below. The revolver clearly saw real world carry and use but was extremely well cared for. The gun is in a great serial number range and almost assuredly saw Civil War field service, likely with the renowned 4th Virginia Cavalry. This very fine Whitney Navy will be a fantastic addition to your collection of Civil War secondary martial revolvers and is a gun you will be very proud to display.