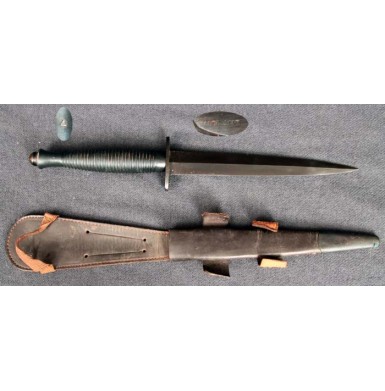 This is an about EXCELLENT condition example of the classic Fairbairn-Sykes Fighting Knife. This is a Type 3 knife, which went into production in late 1942 or early 1943. The Type 3 knives utilized a cast alloy hilt with 27 concentric gripping rings cast onto the pommel. The alloy hilt was adopted to avoid using any metals like brass that were critical to wartime production. While over 100 different English cutlers produced Type 3 Fairbairn-Sykes Fighting Knives, all of the hilts were cast by Wolverhampton Die Casting LTD. All of these hilts had a number cast into the pommel cap between 1 and 4. This number was simply an indication of which Wolverhampton mold the pommel was cast from. The Fairbairn-Sykes Fighting Knife was developed by William E. Fairbairn (1885-1960) and Eric A. Sykes (1883-1945). Both men started their martial careers in the British service with Fairbairn joining the Royal Marines in 1901 and Sykes serving as a sniper during the First World War. Both men eventually joined the Shanghai Municipal Police department (Fairbairn in 1907 & Sykes in 1917) and together were instrumental in developing man of the techniques that are the basis for modern close quarters combat. Among their influential developments were the concepts of “point shooting”, the development of the CQB fighting system of Defendu, the design of the Fairbairn-Sykes Fighting Knife as well as the OSS “Smatchet” and a number of other innovations in weaponry and tactics for hand to hand combat. During World War II both men returned to England and helped to train British Commandos, as well as US and Canadian commando units, US Rangers, and the OSS in their unique close combat fighting techniques. The original Shanghai Fairbairn-Sykes Fighting Knife was designed with a 5 ““ blade, which became a 6 ““ blade with the British military adoption of what collectors refer to as the 1st Pattern F-S knife. The narrow, dagger like blade was razor sharp and was intended to be slipped between the ribs of a victim very easily. In Fairbairn’s classic 1942 book, GET TOUGH! he clearly explained his concept of the fighting knife in use and what he felt were its important design characteristics: “In close-quarters fighting there is no more deadly weapon than the knife. In choosing a knife there are two important factors to bear in mind: balance and keenness. The hilt should fit easily in your hand, and the blade should not be so heavy that it tends to drag the hilt from your fingers in a loose grip. It is essential that the blade have a sharp stabbing point and good cutting edges, because an artery torn through (as against a clean cut) tends to contract and stop the bleeding. If a main artery is cleanly severed, the wounded man will quickly lose consciousness and die.” The F-S Knife deign was so influential that it was essentially copied by other World War II fighting knife designs, including the famous Marine Raider Stiletto, the Case V-42 and the OSS dagger. Fairbairn was very upset with the Type 3 variant of the knife, call the change to the hilt “catastrophic” as it completely destroyed the balance of the knife and the ne grip became slippery when wet or covered with blood. Type 3 Fairbairn-Sykes knives were manufactured with machine forged blades that were 6 7/8” in length, and were approximately 12” in overall length. The hilts were about 4 ““ in length with an oval cross guard that was about 2 ““ wide. The knives were had a blackened finish to eliminate glare when the knives were used in the dark. The knives were provided with leather scabbards that had a blackened metal tip. The scabbards were cut to accept a belt of just less than 2” in width and had an elastic retention band on the upper portion of the scabbard to help retain the knife. A pair of leather tabs on the rear of the scabbard allowed it to be sewn down onto a soldier’s uniform or gear to make it very stable.

This example of the classic Fairbairn-Sykes Type 3 Fighting Knife is in about EXCELLENT condition. The knife blade is full-length and the point remains needle sharp. The blade has a slightly diamond shaped cross section and retains about 95%+ of its original blackened finish, as does the oval cross guard. Other than the word ENGLAND stamped on the top of the cross guard, and the mold number 4 on the pommel cap, the knife is unmarked. The lack of a British military “Broad Arrow” or other military acceptance marks indicates that knife was made for commercial sale to soldiers in England. Many American GI’s purchased these knives for use in the field, especially prior to the Normandy invasion. The hilt is in wonderful condition and shows crisp cast concentric rings. The hilt retains about 90%+ of its original blackened finish, with the wear and finish loss limited to the high and sharp edges of the grip. No wear is present beyond normal light handling and minor use. The original brown leather scabbard is present with the knife. The scabbard retains its original blackened metal tip, and both of the sew-down tabs on the rear. The original brown elastic band on the top of the scabbard is in place, although it has lost its elasticity and it is permanently stretched out. The scabbard is in EXCELLENT condition and shows only some very light scuffing and crazing, and shows absolutely no damage or significant wear.

Overall this is simply a really outstanding example of a Type 3 Fairbairn-Sykes Fighting Knife in simply wonderful condition. The knife is crisp and sharp throughout and the scabbard is in equally fine condition. This would be a great addition to any military edged weapons collection, and is in the kind of condition that would be very difficult to upgrade from. This is a Fairbairn-Sykes Knife that any collector would be very proud to display.